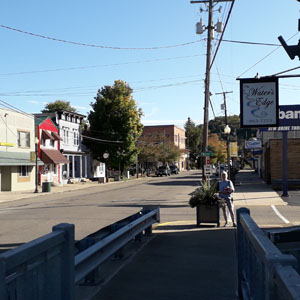 In Malvern Ohio, Moses Porter in 1806 was the first named settler on a piece of land in Brown Township that later became Malvern. Three years later, John Reed and his family moved to the north-west of Sandy Creek, on its left bank. His daughter, Elizabeth, was the first woman to be married in the township, on 10 June 1812.
The north-west bank of the creek was originally known as Troy; the south-east bank as Lodi. The two tiny townships eventually became Malvern. In 1816, William Hardesty built a mill on the north-west bank of the creek. Brown Post Office established in 1828 and renamed Malvern Post Office on 26 February 1840. By 1834, it was assured that the new Sandy-Beaver canal would run alongside Sandy Creek and enrich the township and Hardesty laid out a village and named it Troy. In anticipation of wealth, two years later The Ohio Repository of 8 December 1836 advertised 'An addition to the town of Troy or Malvern, Carroll County, Ohio has been laid out by Louis Vail and John Reed. Thirty-three lots will be sold at public auction on the south bank of Sandy Creek, Saturday December 24.' Louis Vail was Malvern's first postmaster; John Reed had settled in Lodi in 1809. Just weeks before the land sale, on December 9th 1836, 200 lots of land in Lodi, south-east of the creek were sold at public auction.  The land was sold for building spacious streets and houses.
Who, by 1836, might have renamed the little township Malvern and why? Malvern England was the Malvern after which all other Malverns were named but in 1836 it was still a village and had yet to receive the distinguished figures of doctors Wilson and Gully.

The canal did not live up to the expectation that it would enrich the township but in the early 1850s it brought in building materials for a railway. It was a lifeline. In England Great Malvern's fortune was built on water; Ohio's Malvern fortune was based on clay. In 1886, fire clay was discovered on a Col David Roach's farm.

A kiln was built and a brick-making company was formed, known variously as the Malvern Clay Company, Canton-Malvern Fire Brick Paving Co. and Robinson Clay Product Co. of Akron. The company won a gold medal at the Columbian World Exposition in 1893 and afterwards impressed a medal into its bricks and named it the Medallist Brick. One million bricks were produced every month and Malvern became known as The Paving Brick Capital of the World. Interestingly for a fire-brick company, the works burned down on three occasions. Malvern Ohio has other assets that no other Malvern has. Firstly, it boasts a herd of buffalo.  These curious creatures will investigate you close up if you approach them. It is only then that you realise how large they are!  Their contribution to Malvern's uniqueness is buffalo burgers at the annual festivals.

Secondly, it has its own natural gas and some local residents are lucky enough to have free gas all year round. Thirdly, Malvern is built on an oilfield. When asked how long Malvern had been exploiting the oil one resident said, 'Oh, forever' and added that an oil company had bought the right to extract her oil for $8,000.  After all, the oil was no use to her in its unrefined state.
The oil is extracted using Nodding Donkeys which, with storage tanks nearby, are a common sight in the fields.
Today we find that the canal has been filled in; a few heaps of bricks mark the grave of the brickworks and trains don't stop there now. A constant stream of traffic flows through on the "43" and, on Tuesdays, visitors can stop and pick up bargains at Jack and Vida's roadside second-hand household and garden sale. In the picture sequencing above, Jack is giving Bruce a Malvern mug.
Malvern Ohio had two famous inhabitants. Entrepreneur and inventor Theodore Newton Vail (1845-1920) was born in Malvern. He moved to New Jersey where he worked as a clerk in a drug store but also learned to use the dot-and-dash alphabet that his cousin Alfred had invented and that was used by Samuel Morse's telegraph. By the time he turned 19, he was working at the Western Union Telegraph Company in New York City. Vail married and, with his wife and adopted daughter, moved to Iowa in 1866. Three years later, he joined the U.S. Post Office, working in the postal railway service. He started the Fast Mail, the first mail-only train service, which in 1875 began operations between New York City and Chicago. In 1876, Vail became general superintendent of this railway mail service. In 1878 left the Postal Office to become general manager of the recently established American Bell Telephone Company, which was founded in 1877 1877.  Alexander Graham Bell, inventor of the telephone, became the company's electrician and Vail held the managerial position until 1887. When he was 62, he was lured back to lead the company a second time by the man who controlled the company, the financier J. P. Morgan. 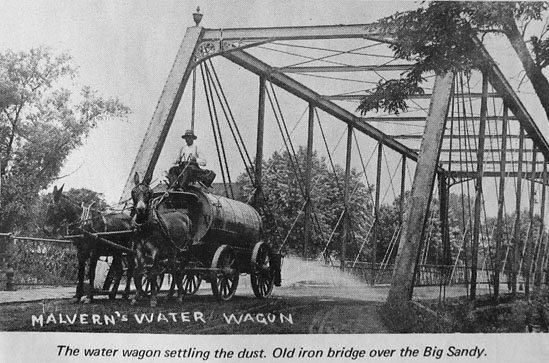 Clyde Singer (1908-99), the youngest of four sons and two daughters, was educated at local schools. After high school, he attended the school at the Columbus Gallery of Fine Arts. In 1933 he received a scholarship to the Arts Students' League in New York City. Working mostly in oils and watercolours, Singer's early work portrayed rural and small-town life in Ohio later shifting to scenes of contemporary urban life. In 1940, Singer became the assistant director at the Butler Institute of American Art in Youngstown, Ohio, where he remained there until his death in 1999. Singer completed more than 3,000 paintings during his career and is best known for his paintings of American scenery, many of which are in the permanent collections of museums throughout the United States and have been exhibited throughout the USA. 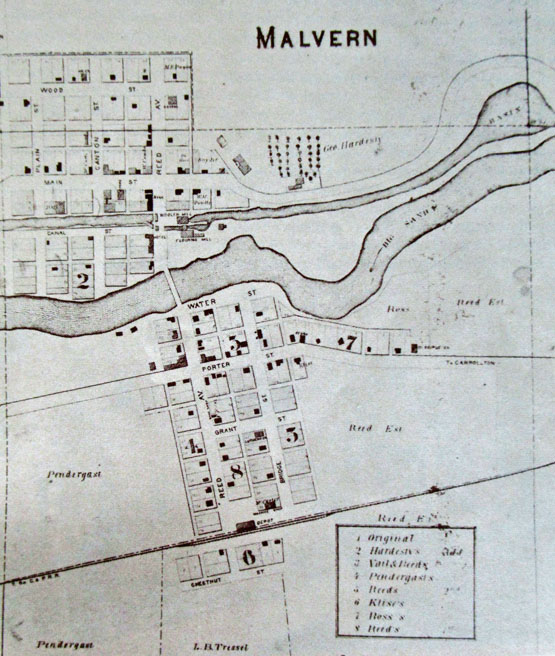 As mentioned previously, Malvern, once nicknamed 'Clay City', became a major producer of bricks from the local clay as settlers developed townships across America in the late 19th and 20th centuries. Malvern was first laid out in 1834 and became incorporated in 1869 as it became the largest village in the County. Located in Brown Township, it sits along the Great Indian Trail that traverses between Pittsburgh and Chillicothe. Today the population of Malvern is about 1200 people.
So what is there to be seen in Malvern for visitors? To start with there is a very visitor friendly north - south  Reed Avenue with numerous small shops and food establishments. In the middle of Reed there is a large Steel Bridge over the Sandy River. The seat and grass area by the bridge enable you to stop and admire the scene when munching a snack or having a sip of Cola. Exploring the town soon locates the Historical Society Headquarters and the Library, both just off the Reed Avenue N. 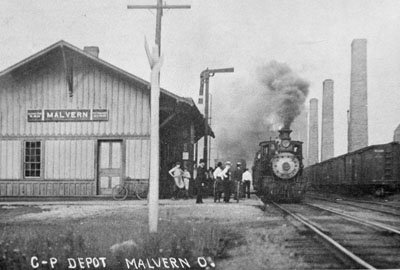 It will not take you long to discover where the old brickyard was, downtown from the river crossing. Now a bare empty space the railway and station have also disappeared from the site.  In the picture left the Cleveland and Ohio Railway Depot circa 1900 with the Robinson Clay Plant to the right.
What you will see when exploring Malvern and its surrounds are the Nodding Donkeys. If they nod when you view them it is not a welcome, merely they are working on that day. These are located in fields and open spaces and pump oil and gas from the underlying geological beds. 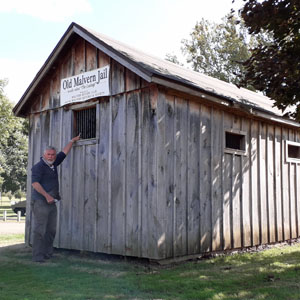 Back to the 43 highway running east/west there are extensive parks and gardens known as Malvern Village Park, which includes the Old Jailhouse, removed from its original position and now restored. On both sides of the river there are historic churches although the old town and Council Office were on the other (north) side of the river to where the shopping precinct is today. Down by the river the mill once stood. That has now disappeared.
Malvern is a quiet town and visitors can enjoy the relaxed environment and easy parking. The people are most welcoming and the original railway locomotive that serviced the Malvern railroad is still parked a couple of miles distant. Perhaps one day a restored railway will attract visitors to this location that is off the beaten track and away from the hustle and bustle of the major cities? In the meantime Malvern celebrates a Great Trail Festival each year. This takes place on the Festival grounds located on State Route 43 on the edge of town. Timed for August, in 2019 the 38th such annual festival was held. Here huge crowds gather for the fun over nearly two weeks which caters for a wide range of interests and events. 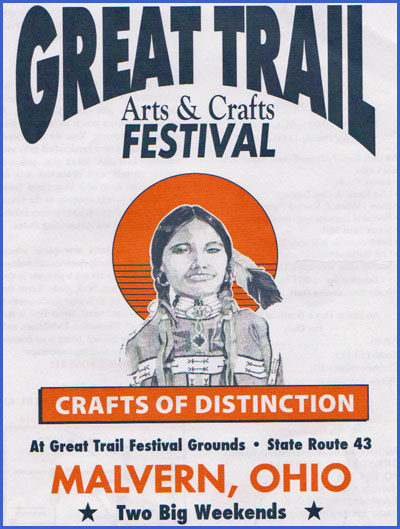 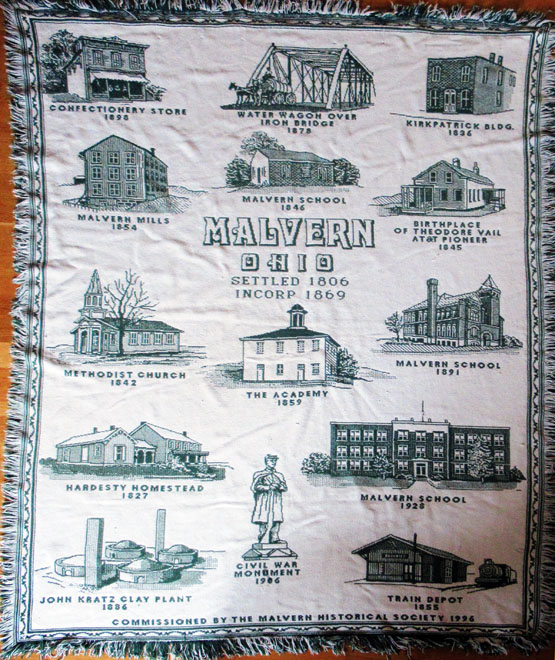 The commemorative pictorial rug, dating from 1996 celebrations, to be presented to the Council of Great Malvern UK from the Mayor of Malvern Ohio.