Founders Awards
Well Decorating originated in 1993 in the Malvern Hills. It was initiated and organised by Cora Weaver in conjunction with Malvern Tourism Department. Well Decorating subsequently became an annual event run by Malvern Spa Tourism Association, later renamed the Malvern Spa Association. This was a body created at the instigation of Birmingham University to organise and promote tourism in the region. Like St Werstan the founder of Malvern in the 11th century, Cora founded well decorating in the 20th. Since 2012, an award for the best dressed or decorated well has been made. Known as the Founders Prize, the trophy comprises a shield with St Werstan plaque and is awarded by Cora representing the Friends of Malvern Springs and Wells.
2012 St Matthias Primary School for Lord Sandys Spout
2013 Team Trough for the Barnards Green Fountain
2014 Holy Trinity Team for Back Lane (Rose Gully) Spouts
2015 Malvern St James School for Westminster Bank
2016 Susan and Ian Woodcock for Weavers Well
2017 suspended due to founder being overseas.
2018 St Andrew's Church, Poolbrook for the churchyard pump
2019 Grange Farm Nursery for Davenham House Fountain
2020 Award not made due to Coronavirus
2021 Malvern Girl Guides for Coach House Spout Founders Award 2020
Coronavirus Lock-down prevented a major celebration of Well Decorating and the presentation of the awards this year. However numerous residents created displays in their gardens as an alternative. Susan and Ian Woodcock chose Florence Nightingale as a theme. This Victorian lady spent much time in Malvern after the Crimean War. She was not well and visited Malvern at least 10 times seeking a cure for her problems. Ms. Nightingale was the beacon of hope and most appropriate for the current health crisis surrounding the Lock-down. As a result she appeared in Susan and Ian's Gordon Terrace garden, in an elevated position looking over Malvern Wells. Founders Award 2019
This year the theme for the May Well Decorating was Flight and there were a record number of decorated sites that totalled over 60. The winner of this year's Founder's Award for well-decorating was Guarlford's Grange Farm Nursery. The delightful and thoughtful decoration of the bronze wellhead in the grounds of Davenham House in Graham Road was the craftsmanship of Nicola Nokes and Carol Nicholls.

Using the theme of Flight, Carol and Nicola figuratively 'flew' to the tropical paradise of Malvern Jamaica and returned with vibrantly-coloured parrots and macaws and the lush vegetation of their habitat.  They have also added a new dimension to well-decorating, taking the idea beyond our shores to Malverns Worldwide. Picture above:  Davenham wellhead decorated with parrots, flora and fauna from Malvern Jamaica. Founders Award 2018
On the 6/7 May once again Malvern celebrated its glorious and unique collection of springs and wells with Well Decorating. Over four dozen sites were displaying their décor to the theme of 'Year of the Woman'. The weekend event culminated in Founder's Prize giving in Priory Park. The Founder's Prize for well-decorating this year was won by Poolbrook's St Andrew's Church for their interpretation centred on the churchyard pump.
Here the theme, Year of the Woman, was portrayed by a traditional Middle-Eastern, Biblical tableau of a woman drawing water from a well. Well-decorators Iris and Peter Senior receive the Founders Prize from Cora Weaver.
Founders Award 2017
The now famous Malvern Well Decorating took place over the May Day bank holiday weekend. The theme was the 'Tree of Life'. This year we were abroad on the Malverns Worldwide project and had to suspend the presentation of the Founders Prize. Friends reported however that one of the most stunning of the many sites decorated was the Lower Wyche Spout.

Founders Award 2016
At the Well Decorating over the May Day weekend the prestigious Founder's Award for well-decorating has this year was presented to Susan and Ian Woodcock for their decoration of Weaver's Well in Malvern Wells. The theme this year was "Friendship", with a particular emphasis on the formal twinning on 30th April between Malvern and Bagneres de Bigorre, the French spa town at the foot of the Pyrenees. To find inspiration, Ian and Susan spent a week at the French spa with its stunning backdrop of the snowy Pyrenees.
On their return, the couple recreated the essence of Bagneres de Bigorre on the slopes of the Malvern Hills. Their reconstruction included the baths, cyclists representing the Tour de France, which passes through the town; walkers, bathers and sunbathers. On the hillside behind Weaver's Well, the white, peaked Pyrenees were recreated complete with skiers and, linking the town and mountains, would you believe, a cable car!
Founders Award 2015 This year the Founders prize was presented to Year 5, Malvern St James School girls for their creative decoration of Westminster Bank, This year's theme was The River of Life, and the Year 5 girls' decorations included a variety of animals that rely on water for their survival, all done with minimal assistance from their class teacher, Mrs Sarah Jones. At Westminster Bank the river was supporting life in all its variety - flying, crawling, slithering, swimming, hoofed and unhoofed, hairy and hairless, and flora. Materials used included natural and handmade items made with papier mache, clay and card, tree, grass and flowers. The deer was prominent from quite a distance; an enticing landmark that beckoned visitors. The use of the deer turned back the clocks centuries, to the time when animals were hunted for sport in Malvern Chase.
Founders Award 2014 The winner of the 2014 Founder's award was the Holy Trinity well-decorating team. For the fourth successive year they turned Back Lane (Rose Gully) Spouts into an eye-catching, early May spectacle. The theme this year was 'Peace' and Cora, who founded Malvern's modern well-decorating event in 1993, was struck by the contrast between the chaos and dismal colours of the war aspect of the design, and the uplifting white and rainbow colours of peace. In the picture Cora is presenting the award to the Holy Trinity team comprising left to right: Catherine Stevenson, Jane Banwell, Nigel Banwell and Allister Stevenson.
Founders Award 2013  The theme for the 2013 Malvern Well Decorating was "Once upon a Time". Red Riding Hood was part of Team Trough's bewitching nursery rhyme interpretation at Barnard's Green Fountain for this May event. It caught the eye and imagination of event judge Cora Weaver and so in 2013, on behalf of Friends of Malvern Springs and Wells, Cora presented the Founder's Award for Well Decorating to Team Trough which was received by local residents Della Cole with baby Isaac, Ted Higham, Molly Waldron, Richard Bosley, Joan Young, Jackie Higham, Jasmine Cole and Stephanie Underwood-Webb. Founders Award 2012
The Founder's Award for well-decorating 2012 was presented to St Matthias School, Malvern Link for their decoration of Lord Sandys' Spout - judging the contest, Cora was impressed with many aspects of the decorated well, particularly the interpretation of the theme 'Achievement'. St Matthias pupils interpreted the theme as on-going achievement - achievement of the present and the future. The overall effect was lively and cheerful - the decoration was eye-catching, relevant and absorbing. This was the first time that the Founder's Award has been presented. It's an achievement for the school, complementing this year's theme.
The award is sponsored by Coca-Cola Enterprises as part of the St Werstan Award scheme for the enhancement of Malvern's Springs and Wells. The scheme is managed by the Friends of Malvern Springs and Wells. In the picture Cora presents the Founder's Award to Phoebe Collins of Year 5 and Dominic Crutchley of Year 4.

For more details of the above awards see our summer newsletters for the appropriate year. Newsletters are on-line on our web site:

In 2021 the Founders Award was presented to the Malvern Girl Guides for their decoration of the Coach House Spout.  Located in the centre of Great Malvern, the display was of young ladies sleeping under the stars, indicative of the guides participation in outdoor activities. The award was presented by Cora Weaver to Mary Flynn, organiser of Malvern Division's display. 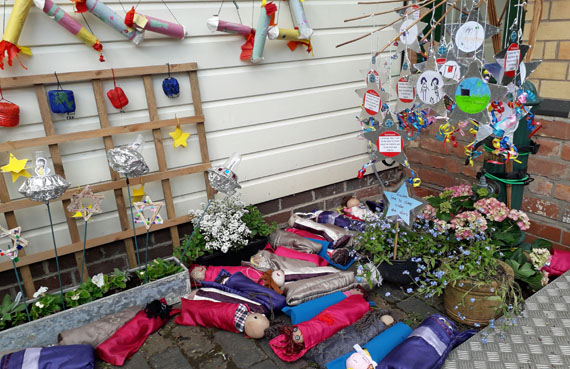 
The Year 2021 is our 10th anniversary of running the Founders Awards for Well Dressing.