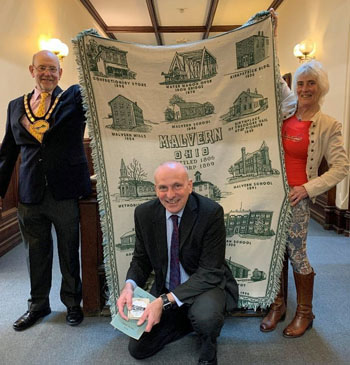 As a result, we were able to present the return gifts to Malvern Hills District Council early this year. These included a rug featuring historic buildings in Malvern Ohio, a rare local history booklet, and a railway medallion. These will now be added to the ever-increasing collection of Malvern memorabilia and valued souvenirs from across the world.

In the picture Malvern Hills District Council Chairman Cllr Dean Clarke and Chief Executive Jack Hegarty receive the gifts on behalf of the people of Malvern from Cora Weaver.

Are you up to date on the proposals? Details are now on-line - click the picture right to discover more.

This time we take you to Pevensey castle in East Sussex (post code BN24 5LE). Pevensey is of great note because it was here that William the Conqueror landed in 1066 to take over the English throne. 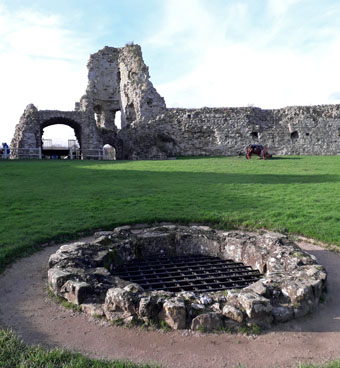 The post-conquest castle lies on the Pevensey marshes and the stonework dates back to Norman times. A recent field trip revealed a well in the centre of the castle with water about 8 feet from the top. If you are surrounded by hostile troops during a siege you need a good water supply. No use nipping out after dark to the local village spring for the odd bucket full of the life essential liquid. One reason we included it in our springs and wells is that we are exploring the Norman monarchy and how this influenced the foundation of Malvern as a religious order in the Malvern Hills. The picture reveals the well and surroundings as you find it today. In the background stands an Elizabethan cannon. English heritage looks after the site and there is an admission charge. Not much to see but a lovely spot to recreate and munch a sandwich on a sunny day!

THE BIG OOOOOOOOooooopps! - WHERE WE SPOT THE BANANA SKIN SLIP-UPS
We often see misunderstanding or misleading information; some is deliberate and some is unintentional. Even we drop the odd clanger. Whatever the reason, good or bad, there is no real alternative to the truth, properly presented, leading to good decision making. With the MSA award we seek to set the record straight.

For example, it has often been said that the British chieftain Caractacus made his last stand against the Romans at British Camp in the Malvern Hills. This was endorsed by Edward Elgar, whose cantata Caractacus was inspired by those dramatic and enigmatic earthworks. It isn't true. Caractacus was in Shropshire when he was captured by the marauding Romans but the story made Malvern more alluring to Victorian visitors.

The same may be said about Dr Wilson's hydropathic establishment. It's great to see the continued interest in Malvern's springs and wells and the google earth map showing the location of the best of them is good news for Malvern's tourism. The information given is thumbnail minimal but, for most of the sites, our webpage is quoted for finding out more. One exception is The Establishment, Dr Wilson's hydropathic. Wikipedia is the source of the thumbnail and describes the building as 'The first purpose-built hydropathic in the country.' Now a 'first' would make it more memorable for a visitor.

It isn't true. In his 1841 publication Spas of England, Dr A.B Granville wrote little about sleepy Malvern because there really wasn't much to say, but he wrote copiously about Ilkley fountain, which was situated on the moors, three quarters of a mile from the village and had been resorted to for cures for two hundred years. Granville believed that it would make an ideal place to establish a hydro with a system of cold water curing on the principles of 'the Silesian peasant, Vincent Priesnitz'.

In no time at all after the publication Hamer Stansfield, a former mayor of Leeds, formed a syndicate. It bought 65 acres of land and hired architect Samuel Sharp to construct the luxurious Ben Rhydding Hydropathic Establishment in Yorkshire, a purpose-built hydropathic hotel with 10 sitting rooms, 60 bedrooms, 12 bathrooms, dining and drawing rooms and a fresh air bath, which was a sealed room into which moorland air was pumped. It opened in 1844, a year ahead of Dr Wilson's modest Establishment.

Anyway, the google earth site is tremendous. It shows 65 springs and wells dotted around the Malvern Hills and you can find information about each one either by clicking on a blue balloon or searching via the panel on the left side of the page. To get there, type in 'Google maps Malvern springs and wells' and have some fun.

New Insights into Saint Werstan's and Aldwyn's Founding of Malvern

A review of the relationship between the interrupted English monarchy and the founding of a religious order in Malvern, based on re-interpretations of the Bayeux Tapestry and Norman historical accounts.

Introduction: The Normans (Men from the North), originated as the Vikings. Initially sea-based warriors they had established by the mid-10th century a substantial land holding in Northern France which was named Normandy.  From here they remodelled their ambitious conquering activities with organised warfare using a combination of aggression and assimilation with the native communities to bring about a power base that extended across Europe. This was to permanently alter the future of Norman controlled territories which included England. Underpinning all this was a zealous commitment to the Christian church. Religion was high on the Norman agenda and was used to justify their often bloody and aggressive conquests. In 1066 when the Normans reviewed their English conquered lands there were around 60 monasteries. By 1135 this figure had quadrupled as the religious infrastructure enabled a constructive management of communities.  Efforts to found a religious infrastructure in what is now known as the Malvern Hills fell within this policy, as is now discussed.

i) What is known about Werstan from previous research?

Although the provenance of Werstan is confusing due to many earlier misinterpretations of his history, investigations carried out for The Illumination of St Werstan the Martyr, (2006) by Osborne and Weaver resulted in a clearer understanding. The focus of this research was the medieval stained-glass windows in Malvern Priory whose order had been muddled over the centuries.  Using the windows and other supporting evidence the study concluded the following facts.

A field trip at the end of 2019 enabled this author to explore new findings relating to the Bayeux Tapestry which is exhibited at Bayeux in Normandy. The tapestry is an extended embroidered illustration of events that took place in circa. 1064/1066 starting with Edward the Confessor's reign and his death and culminating in the enthronement of William I at the then recently built Westminster Abbey in December 1066. As such the tapestry covers a critical period in the establishing of Malvern by the founding of a Norman religious order. The surviving tapestry is divided into 57 scenes although the final crowning of William is believed missing or lost. 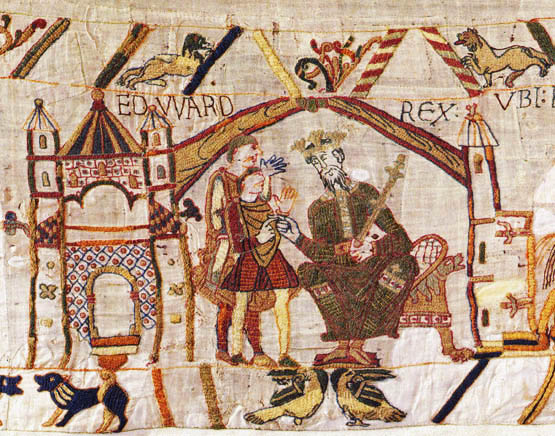 Above: Illustration scene 1 from the Bayeux Tapestry, Edward the Confessor with Harold.

In England Edward the Confessor had been king since 1042. The tapestry opens with scene 1 illustrating King Edward and Harold. Edward was the son of King Ethelred and Emma, the daughter of Richard 1st of Normandy. Norman ancestry was therefore already established in the royal lineage of England by this time. Edward the Confessor had no offspring having married Edith, but was supported by her brother Harold, son of Godwin, Earl of Wessex. Harold, an accomplished military leader, was to become the most powerful man in England alongside King Edward.


Prior to 1066, Harold had been dispatched by Edward the Confessor with an army to deal with the Celts (Welsh) intrusions into England from the west. This was likely in response to the murder of Werstan at Malvern in the 1050s. The day after Edward's death in January 1066, Harold was crowned King of England by Stigant the Archbishop of Canterbury. This was an event that was later to have major repercussions. The coronation is illustrated on the tapestry scenes 28 - 30.

This year the 31 January is the day of divorce with the European Economic Community. This opens up great new global opportunities for us to renew our alliance with the British Commonwealth countries as we forge a new way ahead. Rather like the Malverns Worldwide project where we forge links with Malverns across the globe, so Britain can re-establish itself as a global power leading a restyled commonwealth of countries in trade, education, culture and friendship.

Who will act as a leader and figurehead for this great new initiative? Are Megan and Prince Harry the ideal ambassadors to get this initiative into motion? English Royalty is seen in good light in the countries that once were part of the British Empire. It makes sense for the leading light in a new Commonwealth of Nations to be similarly qualified.

God Save the Queen, Let us have your views.