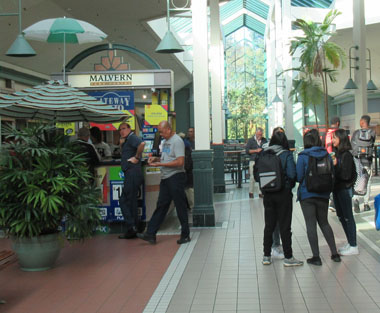 What did you do for Malvern Appreciation Day 19 October? Our envoys went to Toronto Canada.

Malvern is a modest suburb of Toronto. Toronto lies on the shores of Lake Ontario. Malvern is to the east of Toronto in the Scarborough district. Visitors will find a modern library and school as well as extensive modern housing. Once it had a reputation for being an insecure community but today, with its two shopping precincts, it shows little sign of what were perhaps earlier problems, as we found out during our October field trip in 2019.

Our chief point of local contact for Malverns Worldwide was the library and the staff exchanged gifts with us. We also enjoyed the company of local inhabitants during our exploration and this reinforced our liking for this clean and tidy suburb.

Not everything works out quite as well however during our visits abroad and we had an interesting incident in a locality near Toronto. We parked on a quiet roadside to nip to the toilet in Oakville on the lake side.  When we returned we had a 50 dollar parking ticket 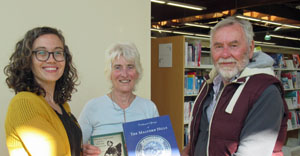 in spite of the sign saying two hours parking. Reading it we discovered that it was for parking back to front; something we do without thought in the UK! We nipped into the Council Offices on the way to the car hire drop off and they offered us a session with their officer the following day! It was easier to pay the fine than delay our departure. No wonder Canada is such a clean and tidy place - they are very strict.

In the pictures - shopping in Malvern Mall and exchange of gifts in the library. 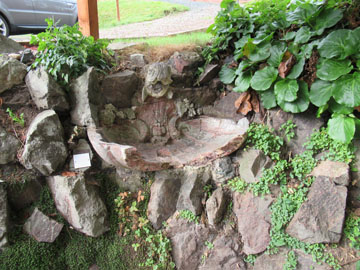 The Foley Fountain is an historic water feature that dates back to August 1830 when the young Princess Victoria and her mother, the Duchess of Kent, came to Malvern for a 10-week holiday to improve their health. During their visit the duchess celebrated her 44th birthday and to honour the occasion this fish-head spout and marble basin were installed at St Ann's Well by Edward Foley, Lord of the Manor of Great Malvern. In 1892 it was moved to Mount Pleasant Hotel, then owned by Lady Emily Foley, who installed a new spout and basin at the well.

Since relocation at the Mount Pleasant Hotel. The Foley Fountain has withstood well over a century of weathering, located outside the hotel car park entrance. Appreciating the endangered nature of the location, the proprietor AJ has very recently erected a shelter over the fountain in order to secure this piece of irreplaceable pink marble for future generations to appreciate and enjoy. Further modifications to the new shelter are in-hand. Unfortunately, in October 2019, two pieces of the fountain basin were discovered on the ground near the site and it was apparent that the marble fountain had become the victim of carelessness; probably someone sitting on it to have a smoke under the new shelter. The more historical repairs included m etal work to pin together the pieces as well as mortar to bond the pieces together and stop water ingress.

Not to be deterred Cora immediately went into action and at a meeting in early November a plan was laid. Catherine has agreed to rebuild the Malvern stonework on which the fountain sits to enhance its support and to reassemble the broken parts. The next question is how to prevent it being sat on or treated as a place for dog ends? The answer perhaps is to restore the water flow with a small pump beneath the basin and fountain head. This all costs time and money and so participation in this project is welcomed. Do contact Cora or AJ. 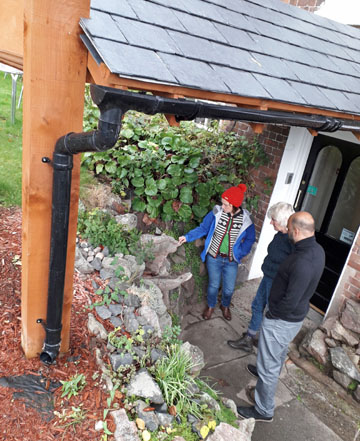 Friends are very fortunate to have the services of Catherine Martin of James Stonework available. She has recently won the Duke of Gloucester Award for work on several well-known Cathedrals. Recognising the restoration effort, we have also had a nomination for the 2020 St Werstan Award for the conservation work, when the project is completed.
.

In the pictures - a sorrowful occurrence to one of Malvern's treasures, just as the new shelter was installed. AJ Bains, Catherine and Cora discuss possibilities.

For more details on the Foley Fountain visit our web site at: http://www.malvernwaters.com/nationalparks.asp?search=yes&p=7&id=323

A year ago, we looked at a historic water feature discovered in the garden of a house in Graham Road. We concluded that it had been fed from the Lodge Spring immediately uphill of the site.  The feature and our thoughts are summarised in Newsletter 88. Since then Anne and Jonathan, the owners, have been carrying out some more excavations with most interesting results. 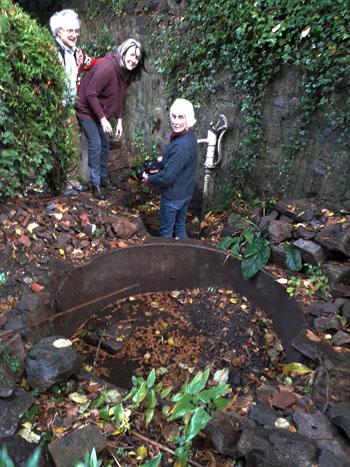 The iron pump on the wall adjacent goes down into an underground tank or cistern that has an inlet and outlet capable of carrying significant amounts of water. This cistern we conclude is a reservoir for the spring water and would contain water about 1 foot deep. The pump would therefore have been able to top up or replenish the water in the pool.  In the shaft down to the cistern there is also a large brass tap. This appears to be a drain for the pool which would have emptied into the cistern and flowed away as waste.

Excavations have also revealed more details of the substantial circular basin that we concluded was a pool. It is several feet in diameter and about 4 feet deep. It is made of high-quality material and has a drain at its lowest point which connects to the tap mentioned above. So, what is this feature which appears to date from about 1900?

One suggestion is that it is a private bathing facility for people wanting to benefit from the natural spring water. It dates from a time when hydrotherapy still continued to be used for health cures. It probably was covered by a tent or removable pavilion when in use to allow privacy. Today we have the complete facility that has survived for more than a century in its original form. Well done Anne and Jon for pursuing matters and let's hope that in due course it will become a unique garden feature with a very interesting provenance. In the picture the owners discuss with Cora the discoveries; the basin rim can be seen in the foreground.

Malvern, once nicknamed 'Clay City', became a major producer of bricks from the local clay as settlers developed townships across America in the late 19th and 20th centuries. Malvern was first laid out in 1834 and became incorporated in 1869 as it became the largest village in the County. Located in Brown Township, it sits along the Great Indian Trail that traverses between Pittsburgh and Chillicothe. The community was initially situated on the Sandy and Beaver Canal but this was short-lived when the Pennsylvania Railroad connected with Malvern. The Lincoln Highway, the first motor route west is located a short distance away. Today the population is about 1200 people.

In the picture that follows: left to right Bruce and Cora from Malverns Worldwide present greetings from the Chairman of Malvern Hills District Council and the Mayor of Great Malvern to Robert DeLong, the Mayor of Malvern Ohio and Jason Lombardi, President of the Malvern Ohio Historical Society. In return we received a pictorial rug celebrating Malvern Ohio together with other inscribed gifts. 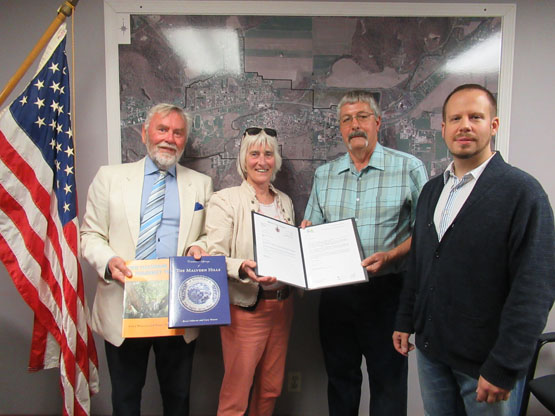 So, what is there to be seen in Malvern for visitors? To start with there is a very visitor friendly north - south Reed Avenue with numerous small shops and food establishments. In the middle of Reed there is a large Steel Bridge over the Sandy River. The seat and grass area by the bridge enable you to stop and admire the scene when munching a snack or having a sip of Cola. Exploring the town soon locates the Historical Society Headquarters and the Library, both just off the main shopping street. 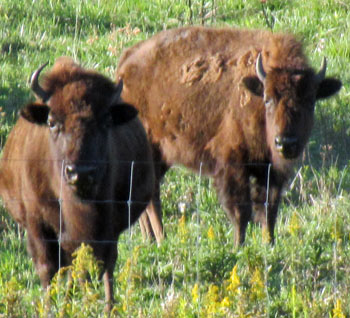 The main State Route 43 highway runs alongside the river and what was once the canal bed, and this links Malvern to the rest of the world. Exploring the immediate surroundings of the town will result in seeing the herd of Buffalo. These curious creatures will probably come to greet you if they catch sight of you on their territory. Beware, they are big when up close!

It will not take you long to discover where the old brickyard was, downtown from the river crossing. Now a bare empty space the railway and station have also disappeared from the site. What you will see when exploring Malvern and its surrounds are the Nodding Donkeys. These are distinct seesaw structures located in fields and open spaces that pump oil and gas from the underlying geological beds. They continue to provide the local populace with a fuel supply by occasionally pumping the mineral wealth from the ground. 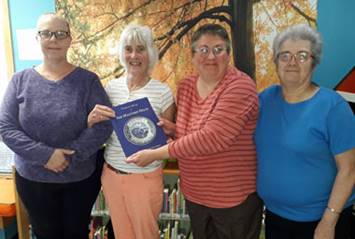 Back to the 43 highway running east/west there are extensive parks and gardens known as Malvern Village Park, which includes the Old Jailhouse, removed from its original position and now restored. On both sides of the river there are historic churches although the old town and Council Office were on the other (north) side of the river to where the shopping area is today. Down by the river the mill once stood. That has now disappeared also.

Picture above - Cora exchanges gifts with the team from the library in Malvern Ohio.

In the picture right Malvern is a quiet town and visitors can enjoy the relaxed environment and easy parking. Malvern celebrates a Great Trail Festival each year. This takes place on the 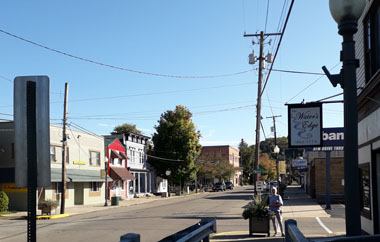 Festival grounds located on State Route 43 on the edge of town. Timed for August, in 2019 the 38th such annual festival was held. Here huge crowds gather for the fun over nearly two weeks which caters for a wide range of interests and events. Something to put in your Malvernologist diary!