Malvern House on the Malvern Plantation has now been listed by the Barbados National Trust as one of the country's historic houses. The National Trust is holding an Open Day at Malvern on 6th March this year. Last year we sent the estate owner June Cheesman some Mulberry Tree cuttings from the offspring of the George Bernard Shaw tree in Malvern, Melbourne Australia. On the Open Day in March, in celebration, one of the Mulberry cuttings will be planted out on the plantation. More information will be available shortly and hopefully June will send some photos of the event. June has also mentioned that she is looking forward to having Bruce unveil a plaque when the Mulberry Tree is thriving. Who knows; in thirty years' time the Malvern estate may be known as Malvernberry Tree Plantation

Any comments welcomed to bruce@thespas.co.uk
Objective

This document proposes new measures to enhance the conservation of the Malvern Hills and their surrounding rural landscape. It will be achieved by co-coordinating, and thus strengthening, the existing landscape conservation measures that are currently dispersed across several authorities and organizations. These include the Malvern Hills Trust, Area of Outstanding Natural Beauty designation, National Trust, etc. It is proposed that this objective be achieved by conferring the area at large with National Park status.

Concern is being expressed about various issues as summarised below:

a) The obligation of approximately 12,000 local ratepayers to fund the Malvern Hills Trust through a precept on their Council Tax. This is limiting the funding for the Trust and is despite these ratepayers not enjoying any unique benefits such as commoners' rights. The problem is exacerbated by the burden on these taxpayers increasing each year: The Malvern Hills Act 1995 p2 para (5) stated that the years preceding that Act had seen an increase in the land owned by the Malvern Hills Conservators and an increase in the number of visitors from around the country.

b) To resolve the conflict between landscape conservation and the need for housing manifested by the building of extensive housing estates on green field sites around the Malvern Hills.

c) To ensure that permitted economic development is sympathetic to the requirements of conserving the hills and surrounding countryside.

d) The problem of easements across MHT land enabling development on green field sites. In particular if the MHT consider it in their financial interest to grant such easements.

e) The problem of the MHT having to spend a considerable portion of their income on legal issues in order to merely maintain the status quo with regard to managing their land, which includes the hills themselves.

I
t is proposed to achieve this objective by conferring with National Park status an area extending from the B4214 (Ledbury to Tenbury Wells) to the west; the River Severn to the east; the A4117 / A456 Tenbury Wells to Bewdley) to the north and the A417 / M50 / A38 (Ledbury to Tewkesbury).

Stage one is to verify the region to which the new measures will apply. Although the MHT owns and manages the core area of the Malvern Hills, the National Trust also owns and manages a considerable area. In addition, much of the locality is designated Area of Outstanding Natural Beauty (AONB). This is the second highest level of protection in the UK after National Park. In the north, it is suggested that the region under consideration includes the Teme Valley. This is extended southwards to encompass the Abberley Hills and the Malvern Hills. Much of this region is already under the authority of Malvern Hills District Council (MHDC).

Stage Two is to identify all the key agencies and organisations that have a significant role in the region as these will need to be represented on any management authority. In addition, significant organisations that have a role in rural tourism will also need to be included, as well as bodies representing the general public, notably district, county and parish councils.

Stage Three will be the consultation with national bodies to direct and support the progress of the final proposals through to legislation and national funding. This will necessarily involve parliamentary participation as well as leadership from the Countryside Agency, now evolved into Natural England, the non-departmental public body in the United Kingdom sponsored by the Department for Environmental, Food and Rural Affairs. This latter body's involvement would include discussion regarding implications for the farming community.

It is anticipated that UK National Park legislation will be customised to suit local conditions and that a specific Act of Parliament will be passed that will be appropriate to the Malvern Hills region. The process will be long and slow; it may take a year merely to delineate and agree on the boundaries of a Malvern Hills National Park. During the consultation period, entrepreneurs will almost certainly attempt to secure last minute development opportunities before the Act of Parliament is passed, as happened during the consultation period for the South Downs National Park.

A National Park Authority (NPA) will need to be established to manage the new National Park. This might be achieved by initially setting up a Malvern Hills Conservation Board that would eventually evolve into the NPA. All key relevant organisations would be represented on the board. When the NPA becomes operational, it would have a major role in planning and coordinating the requirements of all the land owners and relevant operators within the National Park. In addition to managing the rural environment, it would hold a responsibility for rural tourism thereby generating new visitor initiatives.

National Park legislation offers customised environmental control over a delineated region. It enables existing landowners and organisations to function within the region but with the necessity of complying with the National Park requirements. It does not jeopardise economic activity; it channels economic development to be sympathetic to the National Park status, for example by encouraging rural tourism.

Malvern Hills National Park would address all of the issues listed under Background (see above) and at the same time provide comprehensive twenty-first- century conservation protection for not only the Malvern Hills but the whole of the area delineated as the National Park.

The Annual Well Dressing this year has now been announced for 4-12 May. The dressings will be left for nine days, somewhat longer than in previous years. Last year over 50 sites participated and it is recognised as the largest well dressing celebrations in the UK. For more information see the Malvern Spa Association web site. Well Dressing was initiated by Cora Weaver and Friends in 1993 and taken over by the Malvern Spa Association 19 years ago. 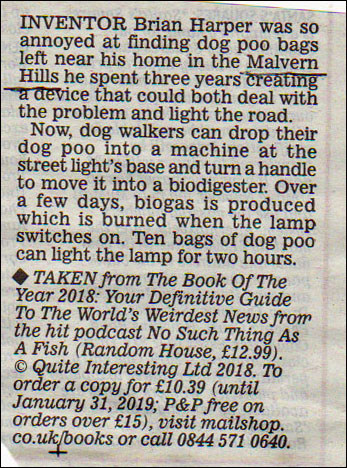 When the lights go out!

We were intrigued by the recent press article sent by a Friend reproduced right. Cora appears to know all about this interesting trial of alternative technology which appears to have been implemented some time ago.  Could this be a way of powering our domestic central heating in the future or perhaps an alternative for a bedside lamp? It all smells a bit do(d)gy to me, what do you think?

Springs and Wells Elsewhere - The 1788 fountain at Porto Gayole Boulogne.

Porto Gayole is the eastern entrance to the medieval old town of Boulogne in Northern France. We were recently in Boulogne researching some entries in Lady Somerville's mid 19th century diaries when we came across this ancient fountain by the town gate. It is dated 1788 and of particular interest was the device that released the water flow. A handle opens the valve and a prolific flow of water then flows into the basin as 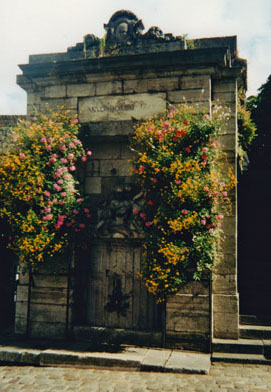 photographed right. This is one of a number of water features around the old fortified town. Inevitably it triggered an enquiry as to its history which appears to be rather elusive. The photograph left was taken 20 years ago and shows the fountain is dry and without its basin. It is apparent that restoration has resulted in an enhanced water feature since then. We would welcome any further information on this intriguing feature which is only a stone's throw from South East England. The picture right was taken recently during our visit. 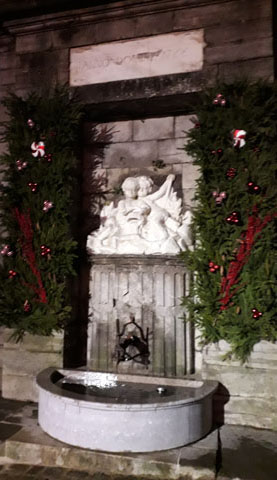 For more information on the subject of our visit go to www.thespas.co.uk and click on Somerville.

Research into the text of Lady Somerville's Diaries has revealed that on the 10th August 1855 while staying in the Isle of Wight, she and her family visited St Lawrence's Well. Situated alongside the Undercliffe Drive beyond Steephill near Ventnor, it comprises an arched shrine in which the crystal clear spring water flows from 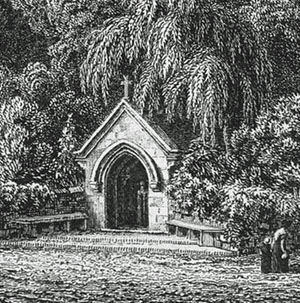 a dolphin head. Almost opposite the well is St Lawrence Villa once belonging to the Earl of Yarborough who had the well house constructed. In its time it would have been a valuable water source for local inhabitants and travellers.

Coming up to date we learn that it is now a Grade II listed structure.  Modern photographs however indicate that it has lost a lot of its former picturesqueness.  Lady Somerville's Diary transcriptions are now on line and so if you want to read more go to www.thespas.co.uk and click your way through to the 1855 Cowes diary. Her visit to the well is on page [41] see F/N 59. A little further on in the diary on-line there is an early illustration of the well. The picture right shows the well in 1839.

A Malvernologist is anyone who lives in, or has an interest in, one or more of the many Malverns scattered around the world.  Satoko Nakamura is a Malvernologist. A graduate in English from Japan's Konan University, Satoko's first visit to Malvern UK in 2018 was an inspiration. She fell instantly in love with the hills, the landscape, the architecture and the town's eminent past as a hydropathic hospital. 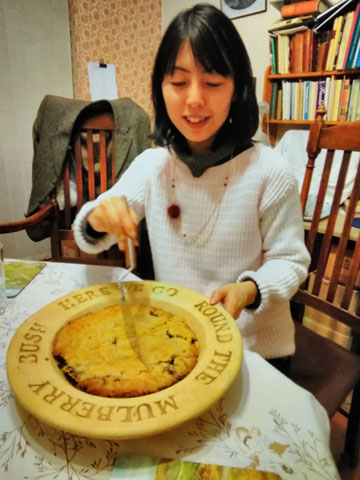 For her MA, Satoko originally planned to tread in the footsteps of the Japanese novelist Soseki Natsume, who studied in London 1900-1902 and was greatly influenced by Victorian drama, especially Victorian Shakespeare. Satoko's  interest has deviated from Victorian Shakespeare to Victorian Malvern, 1840s-'50s, doctors Wilson and Gully and the dramatists and actors associated with them. These include Charles Dickens, Edward Bulwer-Lytton, Douglas Jerrold, R J Lane, their literary networks and relationships and how they brought the Malvern water cure to life.

During her visit to Malvern in February this year, Satoko visited Malvern Museum, spent many hours at the library and was introduced to Malvernberry Pie. She will return to Malvern this summer for further research.