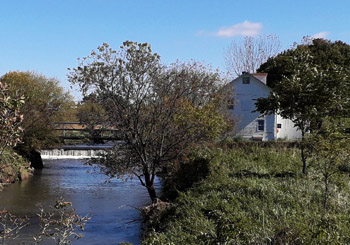 WHAT DID YOU DO ON MALVERN APPRECIATION DAY? THIS YEAR WE VISITED TWO MALVERNS ON THE LINCOLN HIGHWAY.

We recently discovered that there are four Malverns located along the historic Lincoln Highway in the U.S.A. This historic trail runs from New York in the east to San Francisco in the west and the Malverns are located in the four states (east to west) of Pennsylvania, Ohio, Illinois and Iowa. Flying into Chicago we headed west along the Lincoln Highway to find two of them.

The first was Malvern Illinois, a tiny farming settlement 6 miles from the Lincoln Highway. About a dozen or so houses cluster around a road junction surrounded by cornfields, the fruits of which are turned into ethanol. In Victorian times, this thriving little township had two shops, a church and a mill on the local creek. The mill is still there, a conserved and protected building, but no longer operating. The church was pulled down and the shops closed. We soon made contact with local residents and this has enabled us to introduce the Malverns Worldwide hand of friendship from Great Malvern, England.

In the picture above - Malvern Mill on the creek at Malvern Illinois. This is now a protected historic building but no longer functions as a water mill.

Two days later we arrived in a hugely different Malvern, in Iowa. Formerly a railroad town just off the Lincoln Highway, it has shops and cafes, a post office, magnificent library, fire station and a community building that incorporates the mayor's offices. This Malvern also has parks, an arts centre, high school, churches, cycle paths, large cemetery, swimming pool, golf course and even a personalised water tower. We soon made contact with Iowan Malvernologists and exchanged gifts as part of the gesture of friendship with Great Malvern. On Malvern Appreciation Day, 19th October, it was a pleasure and privilege to attend Pink Out, an annual community event promoting awareness of breast cancer and the importance to both men and women of regular  check-ups. Malvern Iowa Library Director Rebecca Bassich has volunteered to act as the local International Ambassador for Malverns's Worldwide. 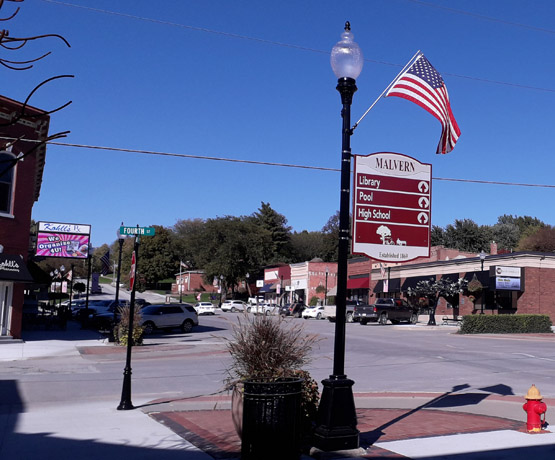 Malvern Iowa; the Malvern Bank is on the right with the library flying a flag in the middle distance.

Further details of these two Malverns will soon be found on our website for any Malvernologist who would like to make contact. Alternatively we are happy to let you have details direct to enable further Malverns Worldwide initiatives.

Recently ten previously forgotten Aboriginal names for 19th century sites and suburbs within Melbourne have been unearthed during research being undertaken at the Melbourne Museum. These include the Aboriginal name for Malvern (Kurnan/w?), These were in a cache of notes made by Alfred William Howitt, an anthropologist and Gippsland magistrate. His jottings appear to be records of his conversations with William Barak, ngurungaeta (leader) of the Wurundjeri-willam, the traditional owners of what is now northern Melbourne, and Dick Richards, Barak's fellow Kulin countryman. Howitt's palm-sized, leather-bound notebooks, written in his barely legible hand, were not precise or verbatim records of these conversations but aide memoires.

You will recall in earlier newsletters we kept everyone posted about sending George Bernard Shaw Mulberry Tree cuttings to Malvern, Barbados. Not only did they arrive safely but within three weeks June at the Malvern Plantation emailed us as follows; the picture speaks louder than words.

"Hi Peter, Bruce,
Attached is a photo of my three Mulberry cuttings at 3 weeks after planting.  I have them under a tree at the back of our house and the white area is the sunlight shining through the branches of the tree." 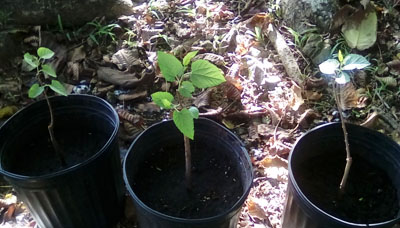 Our thanks to all who assisted in this difficult project including Dr Peter May in Australia who took, grew and shipped the cuttings from the Malvern Melbourne Mulberry Tree. Also thanks to the anonymous donor who assisted with the costs incurred and June Cheesman in Barbados who secured the cuttings and planted them. The next stage is the unveiling of a mature tree, but that will be in a few years time!

Springs and Wells elsewhere; at Banff in Scotland - two memorials unwittingly in one fountain

On the opposite side of the road to the Crimean Cannon, which is outside the Council Offices, can be found the Biggar Memorial Drinking Fountain. The Biggar Fountain in Banff Scotland is a B-listed structure and is being considered for restoration in 2018. Ironically it is a double memorial. It was erected in memory of Walter Biggar who was involved in the local herring trade. However the Victorian Biggar Fountain also stands on the spot where, in 1701, James McPherson played his fiddle in a last defiant act before he was executed for piracy.

In the picture the Crimean Cannon is just visible to the right with the Biggar fountain in the foreground.

Malverns Worldwide is a unique and pioneering project to extend the Hand of Friendship to everyone with an interest in any one or more of the two dozen or so Malverns around the world. Post-Brexit, the UK aims to establish new relationships with other communities around the globe and Malverns Worldwide is similarly making new friends within this global network. Nicknamed Malvernologists, participants can explore and enjoy this hand of friendship that is extended to Malverns everywhere - from historical roots to present day. 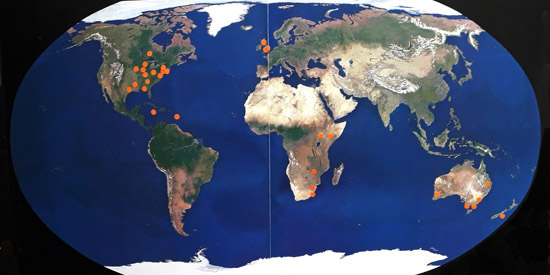 Do join us in this global adventure.

Above - world map with Malverns marked in orange. For further details see our web site www.malvernsworldwide.info 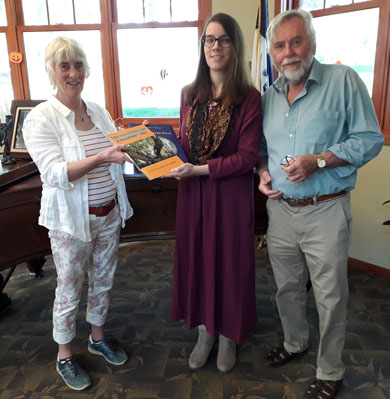 Right - the exchange of gifts is an important aspect of Malverns Worldwide. Here Malvern Iowa Library Director Rebecca Bassich receives books from Cora and Bruce about the Malvern Hills in England. In return Malvern Iowa residents donated gifts to Great Malvern England and these will join those on display in the cabinet at the Council offices in Avenue Road.

Local Springs and Wells News - Cottage in the Wood Spout

The Cottage in the Wood Spout (74) has always been something of a mystery because we have not been able to unearth pictures of what it once looked like. All that survived was a depression in the bank with a piece of old pipework above. That was until recently. We can now report that a manhole in the depression in the bank has revealed what appears to be a water source. It is apparent that the original source has been contained and piped away. The water is visible by looking down the manhole which is covered by a metal and timber framework to prevent unwanted debris entering the cavity. 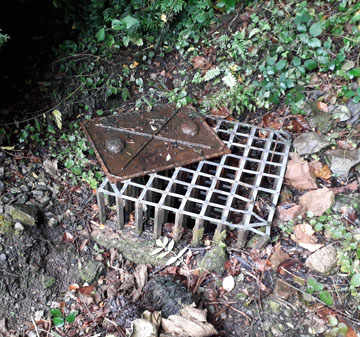 In the picture taken recently the contained spring water can be seen about 4 feet below the surface in the manhole.

Website - recently our web sites have been hacked and some data and pages destroyed. We have been advised that this is an arrestable offence. Investigations and restoration plans are underway. Our apologies for any discontinuities should you be looking in. Whilst we continue our pursuits as before, rather like destroying a valued family treasure, it does mean that others sadly will be unable to explore and hopefully enjoy the outcome of our endeavours.