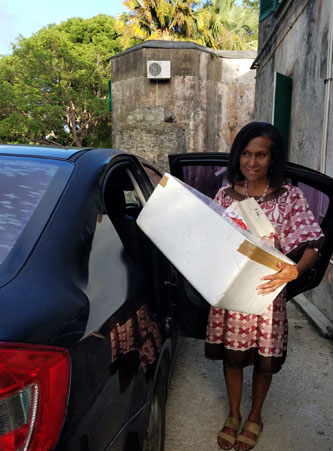 Friends are the recognised guardians of Malvern's water heritage (Malvern Gazette 1 March 2013 p.14). We are an independent voluntary group of Malvernologists which relentlessly promotes research and celebration of Malverns Worldwide and the Springs and Wells of the Malvern Hills.
Mulberry Tree Project LATE NEWS JUST IN
While preparing this newsletter we heard that cuttings from the George Bernard Shaw Mulberry Tree in Malvern, Melbourne, Australia have been dispatched to Malvern, Barbados. Even better, hours before the newsletter went out we received an email from June Cheesman in Barbados as follows:

"What great news I have to report!  The Mulberry cuttings arrived safely this afternoon and I have to say I was impressed with the superb packaging which I sensed was done with great love and tender care.  Thanks to all of you for the time, the patience, the effort involved and also for absorbing the cost of getting these cuttings to Barbados. "
During her earlier visit to England this summer to discuss the Malverns Worldwide project, Di Foster, ambassador from Malvern, Victoria, Australia updated us on the Mulberry Tree project. Dr Peter May, in Australia was in the process of distributing recently reared cuttings from the George Bernard Shaw offspring tree in Australia. These are to be sent to Malverns in the US and Barbados. The complexity of documentation was baffling but we hoped that all was now in place. This follows the procedure that we initiated to reinstate the George Bernard Shaw tree in Priory Park Malvern UK with cuttings from the Australia tree. This was in turn a cutting from the original tree that GBS unveiled in 1936. The original in Priory Park blew down in a storm in 2000. Of the 6 cuttings that arrived in the UK in 2009, five we believe have survived. Details of this project are available on our web site via the INDEX page.

Pictures: All Is Revealed

June from Malvern Plantation, Barbados displays the three Mulberry Tree cuttings that arrived from Malvern, Melbourne, Australia in August 2018. After months of rearing the cuttings and sorting out the documentation the cuttings have now arrived. They now go into their next phase which is growing them to a size where they can be planted in a permanent position as a symbol of friendship between Malverns Worldwide. 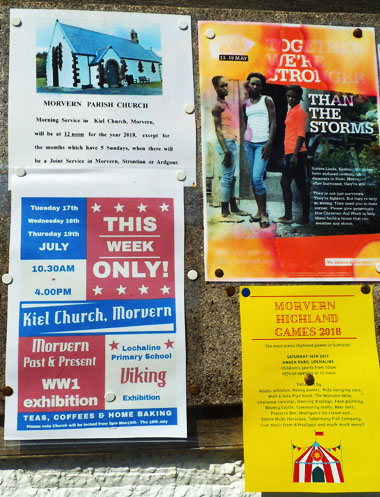 Envoys Cora and Bruce explored another Morvern earlier this year.
Morvern's southern border is the Sound of Mull, in the Highlands on the west coast of Scotland. Morvern sounds like Malvern but, apart from the homonymic, what do these two places, nearly 500 miles apart, have in common? Malvern in Worcestershire (Celtic, mael ferna = bare hill) is a group of townships clustered around the ankles and feet of a distinctive hill range; highest point 1300 feet.  Morvern (Gaelic A'Mhorbhairne = the sea gap), is a peninsula shaped like an inverted pyramid and is wild countryside suited to animal grazing. Divided into two parts by the narrow A884 that reaches the main township of Lochaline, Morvern's other road, along the coast, is one car-width with ample passing places. The highest point is the 2,800-ft Creach Bheinn and the craggy and rocky landscape is homeland for the hordes of sheep that roam contentedly.

Before the Highland Clearances and the 1840 potato famine, 1500 inhabitants had dwelt in this mountainous upland but today Morvern's 250-sq-miles are home to nearer 300. The area does attract visitors, though, from the UK and Europe, particularly Germany and Holland. If you go, it's easy to upset people. Don't ask, 'Are you from Holland?' They may be German; and vice versa. 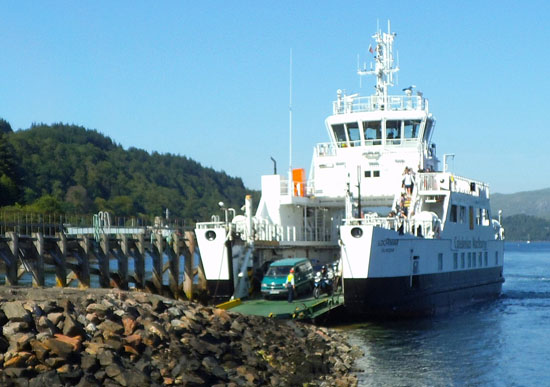 You can spend hours walking or sitting at the Sound-side terminus watching the ferry come in every hour, disgorging its wheeled and unwheeled load, then refilling its belly to sail back to Mull. Best not to put your mobile phone in your shirt pocket if you bend over looking for the stunning sea shells. Brine and batteries don't go well together, as Bruce discovered.  If you plan to visit Morvern between June and August, read up about the might of the midge to wreck the spirit, ingenuity and optimism of the most intrepid explorer.
Above and left the Morvern notice board near the shop and the ferry to Mull. For more information and pictures, see www.MalvernsWorldwide.info.
Malvernensis, the new Holiday Lodge for Malverns Worldwide

As part of the Malverns Worldwide project, plans are now progressing to build high quality, low-cost accommodation for our special envoys from Malverns abroad. The special welcome facility will be located within the Malvern Hills District at Pipers Brook, Eastham, in the beautiful Teme Valley.
The holiday lodge will be built next to an attractive large pond overlooking a natural gorge with stream and waterfalls, all on a 2 acre undulating wooded site.  Pioneer Malvernologists will be able to explore the scenic, peaceful Teme Valley, Great Malvern and the Malvern Hills and villages and towns of Malvern district. This in turn we hope will result in favourable reports being sent back to their homelands and larger scale tourism interaction will follow. 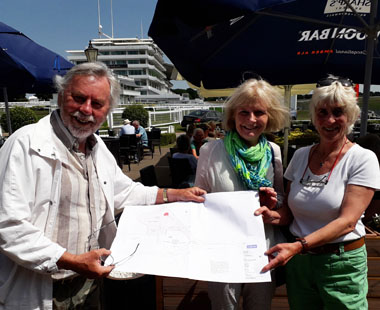 Local residents at Pipers Brook are supporting the project and have offered their services in managing visitors to the lodge. Inevitably, complex planning issues have been taken up with Malvern Hills District Council and we are hopeful of being in a position to begin construction later this year.
We can now report that the planning application has been formally approved and we are in a position to move to the next stage which is organising the construction. Mayor of Malvern Pennsylvania David Burton and his wife Linda are top of the list of visitors for next year. They are closely followed by Di and Ross Foster, ambassadors from Malvern, Victoria, Australia. In fact Di recently flew into London to join us in a modest celebration of the success in securing planning permission. Having met up at Bruce's home at Tadworth, we had a celebratory lunch meeting and discussion at nearby Epsom Racecourse, home of the Derby.
Numerous individuals and organisations have supported the Malverns Worldwide project in various ways since its inception. Of special mention must be Malvern mayor Cynthia Palmer, Malvern Hills District Council, and High Street Malvern. In the picture, Bruce, Di and Cora review the plans at Epsom Racecourse on a hot summer day with temperatures in the 30s

. Right is the architects design for the Lodge, At present the debate is about what to call it and Malvernensis appears the best suggestion so far.

William Langland the 14th century poet is depicted in St Mary's Church window in Cleobury Mortimer, Shropshire. This is approximately an hour's drive from Great Malvern. In the east window above the main altar is a stained glass window that includes what is 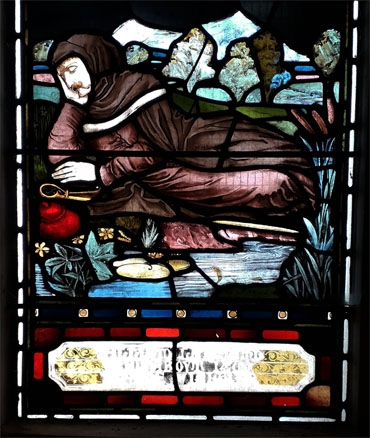 generally thought to be the Pewtriss Well - later renamed the Primeswell. With the Malvern Hills in the background and Malvern waters in the foreground, here he dreams his Vision of Piers Plowman. So what is this all about? The vision is a written work that begins with a view of the world seen from the Malvern Hills. Langland was supposedly born at Cleobury, took holy orders at Little Malvern and later moved to London. His work takes an enlightened, cynical view of the medieval church. Scholars today continue to investigate the work and its supposed author and new theories abound.
It's well worth a look if you are near Cleobury Mortimer. Let us have your thoughts.
Malvern Australia upstages Malvern England - bikes versus cars
Here in Malvern England we are proud of our Morgan cars. The factory is located on the north east side of Great Malvern town.  As part of our project to build the Malvern Lodge for international Malvernologists we are looking for Malvern orientated décor. Cora managed to secure an original 1945 advertisement for Malvern Star Bikes. They were produced in Malvern, Melbourne, Australia and reached nationwide acclaim; especially for soldiers and families coming together again after the Second World War. Claimed to be the sweetest running bicycle on the road, they provided interesting opportunities for spins to the seaside, shopping and visiting. There was a model for every member of the family. Not only that, every Malvern Star was guaranteed forever!  Such promotion upstages Morgan cars although they are so collectable they will likely last forever! 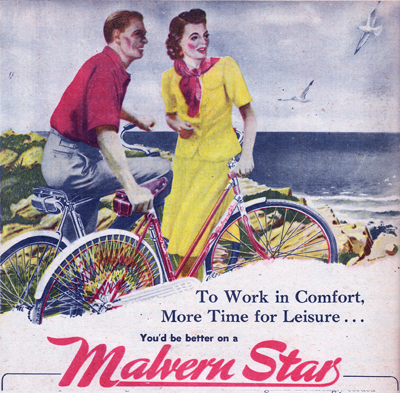 When we have it framed we plan to display the complete advertisement in all its glory in the new Lodge; the illustration to the right is part of it. Do you know of anything else that we could use to extend the Malvern interior theme of the Lodge? If so do let us know.

A Surprise Treasure
Whilst browsing the charity shops near Malvern in early August we came across this unusual plate. Depicting what appears to be a Malvern Fountain symbol, it is something that we have never seen before. To give an indication of size we have photographed it alongside a vintage bottle of Schweppes Malvern Water. It actually measures 36 x 50 centimetres, which is a large plate! 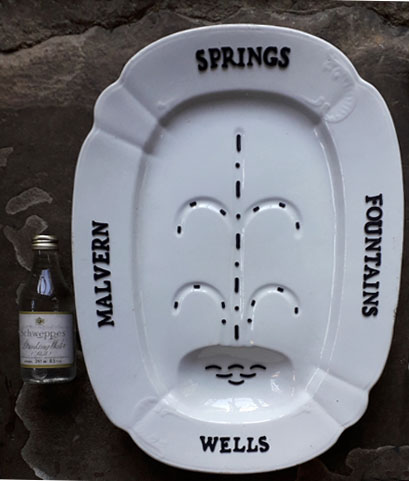 We have decided that it has to hang in the forthcoming Malverns Worldwide Lodge as part of our planned décor. The other alternative is to sell it and use the money to go towards the Lodge. Being unique we have decided to keep it for the Lodge!