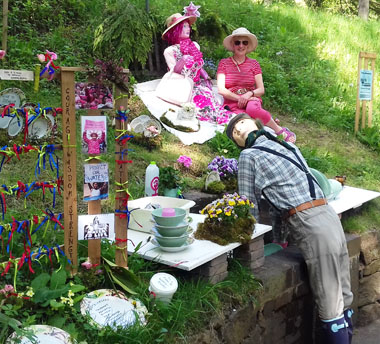 Friends are the recognised guardians of Malvern's water heritage (Malvern Gazette 1 March 2013 p.14). We are an independent voluntary group of Malvernologists which relentlessly promotes research and celebration of Malverns Worldwide and the Springs and Wells of the Malvern Hills.
Mulberry Tree Project goes Worldwide

From acorns, oak trees grow. From George Bernard Shaw planting a mulberry tree in Priory Park Malvern in 1936, a global Malvern forest worldwide looks possible! Plans are now laid for shipping mulberry tree cuttings taken from the direct descendant of the original tree in Australia to Malverns worldwide as part of our international celebration of friendship between Malverns. Dr Peter May has been rearing cuttings for a year which are now in the process of being distributed to Malverns in North America and the West Indies.
In the meantime, the following comments have been sent in by Friends of Malverns Worldwide: 'I assume what you've got at Malvern is a Red or Black Mulberry, as famously planted in Shakespeare's garden at New Place in Stratford. In a photo of the Australian tree, it certainly looks gnarled enough to be Black, and it had to be propagated vegetatively. They're difficult or impossible to propagate by seed, and are usually raised from cuttings. James I decided to start a silk industry in Britain, and masterminded the import and planting of Mulberry trees, but he got the wrong one. (Black comes from Iran, originally. Red comes from eastern US, so is unlikely at that date.) It's White Mulberry that's native to China, and is the food of silkworms. White mulberry can be propagated by seed quite easily (I've done it) - on the other hand, the tree and fruit are nothing like as interesting as Red Mulberry. When seeds are offered, they're normally White, when naive people like me think they're getting delicious fruit and a gloriously gnarled trunk. Nit-picking, as usual.' Best, C
Here is the link to the mulberry orchard in England: https://www.moruslondinium.org/research/tiptrees-rare-mulberry-orchard
which I thought might be of interest!
WELL DRESSED WOMAN
On the 6/7 May once again Malvern celebrated its glorious and unique collection of springs and wells with Well Decorating. Over four dozen sites were displaying their décor to the theme of 'Year of the Woman'. The weekend celebrated a century since women secured the vote and many other aspects of emancipation were included in the various displays around the Malvern Hills. In addition, a couple of recently-discovered sites received attention adding a new dimension to what is now a traditional event since Cora initiated the practice in 1993. Cora could not help having her picture taken at Weavers Well, one that was named after her when no other name was forthcoming. Here the man is depicted as doing the washing up in the spring while the two ladies are sunning themselves on the bank behind! (see picture at top of page) Another amusing one was the notice 'Alcohol Controlled Area' at the Rose Gully or Back Lane Spouts. Does someone know something about the water that we do not?
Several people commented that as this year's theme was Year of the Woman, next year's should be LGBT+.???
The weekend event culminated in Founder's Prize giving in Priory Park.
The Founder's Prize for well-decorating this year was won by Poolbrook's St Andrew’s Church for their interpretation centred on the churchyard pump.
Here the theme, Year of the Woman, was portrayed by a traditional Middle-Eastern, Biblical tableau of a woman drawing water from a well. The life-sized female figure represented the ordinary woman carrying out a humble, everyday chore but which was vital to the health and survival of her family. In front of the figure was a path along which she would pass, a metaphor for the progress of women though history; the long path to emancipation and the vote, to education at all levels, the right to work, to divorce, to enter politics, to own property, to financial independence and, one day, to achieve equal pay for equal work. Other Biblical female figures were remembered for gifts and achievements that demonstrated the often unrecognised yet vital role women have always played.
Picture above - Well-decorators Iris and Peter Senior receive the Founders Prize from Cora Weaver, who initiated Malvern's modern-day well-decorating a quarter of a century ago, in 1993. The award, a cast brass plaque depicting St Werstan, Malvern's patron saint of springs and wells, is sponsored by the Friends of Malvern Springs and Wells.
Picture right - The decorated pump at St Andrew's Church. Poolbrook.'
Still bottling
Holywell spring water may not have been the favoured flavour of British monarchs for 500 years, as some websites have noted recently, but it still puts Malvern water on the worldwide map. For the recent royal nuptials, Holywell Spring Water was produced, in one-litre glass bottles, Markle Sparkle and Still Harry. Priced at £1.75 a bottle, 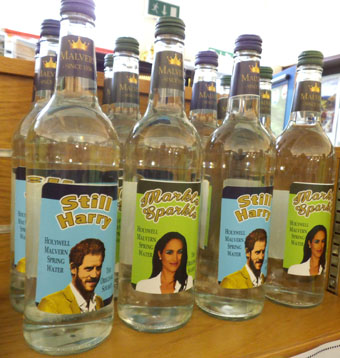 this limited edition was last seen at Malvern Tourism Information Centre in Church Street.
Incidentally Malvern Barbados sent a Message of Congratulations to Prince Harry. They also recently secured an import permit for their own George Bernard Shaw Mulberry Tree cutting. Peter in Australia is arranging the transshipment of the cuttings.
Droitwich Natural Brine Baths make a Comeback
From 1836 to 2008, Droitwich Spa led the world in the treatment of ailments that could be alleviated by the use of brine treatment. The painful symptoms of rheumatic complaints are known to be reduced, and often terminally cured, by bathing in strong brine, which can be replicated by adding sodium chloride (common household salt) to ordinary tap water. Above:- The Brine Baths swimming pool about 100 years ago fed from local underground sources.

The first brine baths at Droitwich, the Royal Baths, were built in 1836 and closed during the Great War. St Andrew's Brine Baths were built in 1887 and, after several metamorphoses, sank in 2008 when BMI Healthcare pulled the plug due to salt erosion of the facility.
However on 31st May 2018, Wychavon District Council (W.D.C) approved an outline planning application for a single storey building that will include a brine bath, jacuzzi and café. The complex will be built in Droitwich Lido Park adjacent to the existing lido. The plan to restore the world-famous restorative brine to Droitwich was initiated by Cllr William Moy of W.D.C. Mr Moy is one of five directors of SOBBS (Save Our Brine Baths), which led a campaign to raise the money for the application. 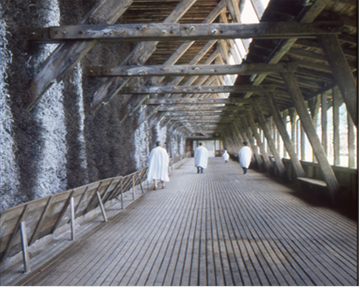 For more information and a look at the design of the new complex, Google 'Droitwich Brine baths'. If you want to excavate a bit deeper into the restorative action of brine, treat yourself to a copy of The Healing Baths of Droitwich Spa by Cora Weaver at £7 inclusive of p & p. Cora's contact details are at the end of this newsletter.
Salt therapy, in the form of inhalation and bathing, is still widely available in several European countries. It has proved beneficial in cases of upper respiratory tract ailments including asthma, diseases of the larynx (laryngology), the eyes (ophthalmology) allergies (allergology), rheumatic complaints and general aches and pains. At Wieliczka, 12km south-east of Krakow in Poland, subterranean tunnels running through natural salt caves have been converted into a therapeutic center. Guests suffering from pulmonary problems stay for up to seven-hour breathing in the purified air under the supervision of doctors and physiotherapists.

Germany's many Gradiers (graduation towers) perform the function of an al fresco inhalatorium. The tower consists of a frame of thick wooden poles stuffed with bundles of blackthorn. Brine is pumped to the top of the Gradier and trickles down the blackthorn bundles. The water evaporates, creating a brine vapour that is inhaled by patients. It's free if you merely want to try it out but anyone with a medical condition should consult a doctor. German doctors speak good English, by and large. 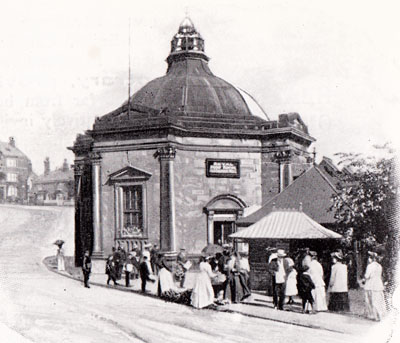 Since the early seventeenth century, visitors flocked to Harrogate to bathe in and sup the sulphur water to cure a variety of ailments. Celia Fiennes described it in 1697 as the '
Stincking Spaw' that was effective in the treatment of scurbutick humours (skin conditions) and for keeping the bowels on the move.
Picture - Harrogate's Sulphur Well, once a popular public facility.
In 2012, new EU regulations declared that the sulphur water was unfit for human consumption. Local historian Malcolm Neesam pointed out that, over the years, millions of people had drunk the water with no ill effects. 'Modern methods of scientific analysis enable us to discover more minute traces of the water's component parts, and if some of these elements in larger quantities are regarded as dangerous, then we should avoid consuming them in massive amounts. What we must do is to see that the natural spa waters remain uncontaminated by human interference.' Last year, a local group began discussions on the prospect of once again making sulphur water available for quaffing at the Royal Pump Room Museum.

If you do ever take the sulphur water, breathe in and then out and only drink on an out-breath so that you can't smell the sulphur, otherwise the water may indeed rise again. N.B  Harrogate toffee was invented to take away the rotten flavour, so perhaps buy your toffee before doing anything else.

General Data Protection Act (GDPA) 2018
A quick note about GDPR.  We do not get people's email addresses from 3rd parties, nor do we give any information out to 3rd parties. We hold secure information solely from friends we've had contact with (e.g. attended a springs and wells event) who've indicated their wish to be added to our mailing list or requested such via the website. We are very careful to only circulate our free bi-monthly newsletters and the occasional email about a specific activity. Both are informational in nature rather than purely marketing. If you no longer want to receive emails from us, you only have to request such and we'll remove you from our list. Just send us a reply email 'NO THANKS' and your details will be deleted from the mailing list. It really is as simple as that.
Tenbury Spa Building - Do you remember? 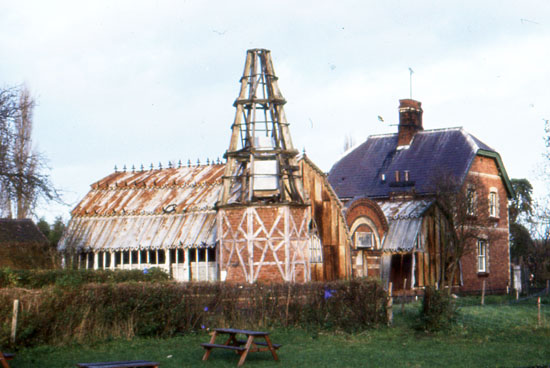 In recent newsletters we have written about the Tenbury Wells Pump Rooms that were restored in 1989 after Tenbury became integrated into the Malvern Hills District. There have been some interesting responses from readers about the various aspects that we covered and an intriguing photograph of the pump rooms has come to light. Reproduced above, you can see what a state the historic pump rooms were in before restoration. The picture is dated 1984. These unique spa buildings could so easily have been lost forever.