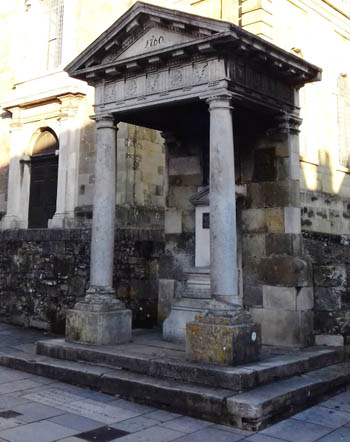 Friends are the recognised guardians of Malvern's water heritage (Malvern Gazette 1 March 2013 p.14). We are an independent voluntary group of Malvernologists which relentlessly promotes research and celebration of Malverns Worldwide and the Springs and Wells of the Malvern Hills.

In 1731, a raging fire swept away everything in Blandford Forum except a handful of brick-built houses. To raise the huge sum for rebuilding, charity performances were held in Drury Lane and the King, Queen and the Prince of Wales donated £1300. To celebrate the end of the rebuilding, local architects John and William Bastard erected the Blandford Fire Monument. It sat above a piped spring, which would provide a head of water for fire hoses in the event of any further conflagrations. The architectural style chosen was Classical Greek Revival. Like the Parthenon, it is supported on plain Doric columns and its frieze comprises similar vertical-fluted triglyph though the metopes on this monument are far plainer. The pediment bears the date of construction, 1760. It was later converted to a drinking fountain, see above. 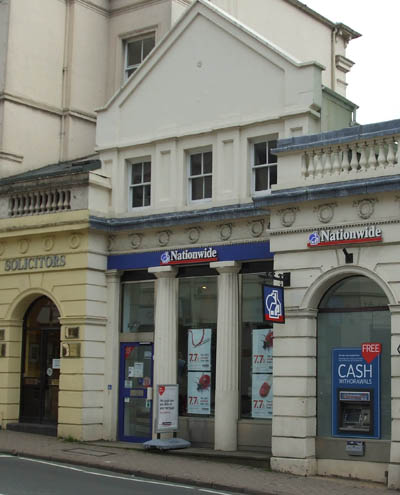 In 1823, a pump room and baths, later known as the Coburg Baths, were built in the centre of Malvern village. The complex was not built over a spring but was fed by spring water gravitating down Green Valley (formerly Hodges Way but now known as Happy Valley). Like Blandford's monument, the architectural style is Classical, with its fluted Doric columns emulating the Parthenon. The horizontal lintel over the doorway into the pump room is decorated with laurel wreaths, a common decorative motif in Regency architecture. The two arched doorways into the baths are a reminder that it was the Greeks who put the arch into architecture. The pump room was circular and the evidence is still there in the ceiling and the skirting boards. The two niches that once held the statues of Diana and Actaeon are empty. Who do you suggest might stand in their stead? 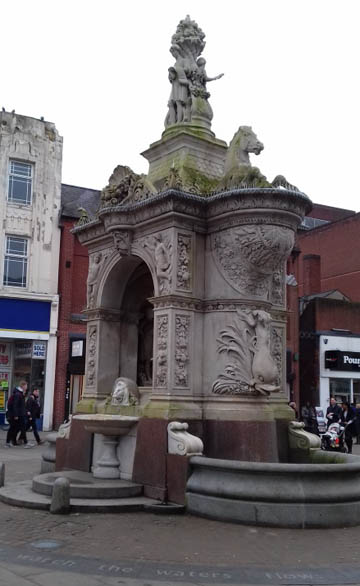 At noon on 17th October 1867, thousands of people turned out to see the unveiling of a handsome new drinking fountain that had been presented by the Earl of Dudley to the inhabitants of the market town of Dudley. The streets were crowded and some people clambered onto roofs to get a birds eye view because the fountain was surrounded by plume-helmeted, mounted soldiers. The unveiling was performed by the countess of Dudley, who sipped a glass of fountain water to demonstrate the importance of clean municipal water supplies.


Dudley was one of the birthplaces of the Industrial Revolution and grew into an industrial centre in the nineteenth century with its iron, coal, limestone and nail-making industries. The fountain is the antithesis of this muck and grime. Health, nature and cleanliness are celebrated with sea horses, dolphins, sea shells, cherubs, swags of flowers and foliage and the whole is surmounted by two lightly-clad figures. One carries a distaff, the sign of women's work or domain; the other carries a scroll, which is often shown in the hands of the apostles, to whom God gave wisdom.

The fountain was designed by sculptor James Forsyth, who also designed the Perseus and Andromeda fountain at Witley Court. In 1892 his younger brother, William, had carved the marble spout and basin for Malvern's St Ann's Well and Forsyths also created the Temperance Fountain in Malvern Link.

The Dudley Fountain provided clean water for tradesmen, industrial workers, residents, visitors and animals. During the twentieth century the fountain became dry, dirty, dismal and desolate but was restored in 2015 as part of a £4.6 million HLF European funded town centre regeneration scheme. The water basins and statuary were cleaned, pigeon deterrents added and the internal pipework restored. New paving was laid around the base, into which a poem by local poet John Edgar was incised.

The Regional Conservation Award was established in 2015 to reward the high quality conservation work done by architects and groups across Birmingham and the West Midlands. Do we have any water features in Malvern that might be similarly addressed?

A couple of Friends who read the article about the section of metal frieze from the Tenbury Wells pump rooms made an instant decision to go and see the pump rooms for themselves. Another Friend took a closer look at the motif.  'Your decorative panel seems to show lotus flowers, buds and leaves, which would be consistent with the 'Chinese' style devised for the Tenbury spa buildings (lotus is of course a water plant). It appears not to be influenced markedly by Art Nouveau, so the dating of the 1860s looks good.'

Our attention in 2018 will include the South African Malverns as part of the Malverns Worldwide friendship project. Like all the other Malverns, each has its own unique history and Malvern Johannesburg is no exception. The locality up until the 1880s was farm land occupied by European immigrants, however gold was first recorded as discovered on the Witwatersrand in 1884. This was to change the development of the region completely to create the most prolific and prosperous gold mining region in the world. Hence Johannesburg was founded and Malvern, a suburb came into being where there were two mines, first the Geldenhuis Estate Gold Mine in the late 19th century and later the Geldenhuis Deep Gold Mine in the early 20th century. 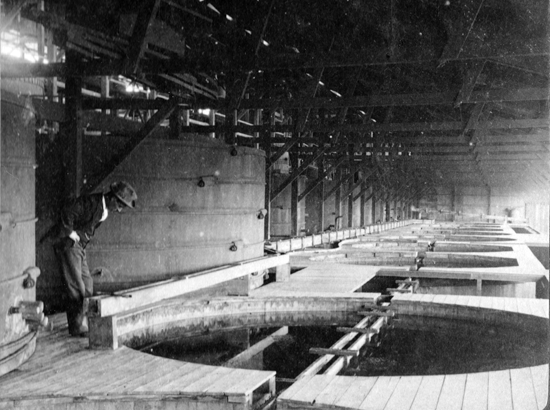 Like the Malvern Hills in England, gold mining became a local occupation albeit England saw only a short exploitation in the 18th century compared with Malvern, Johannesburg in the 20th century. One or two other things have likened the two Malverns. Maps show a locality called 'The Springs' in the vicinity of Malvern Johannesburg. All this justifies further investigation and we hope contact and a visit later in 2018. In the picture above which dates from about 1910, gold ore is processed on an industrial scale in the Precipitation Vats at the nearby Robinson mine. Watch this space for more details in due course. In the meantime have a look at our web site index and click on Gold Rush Malvern for more details of England's efforts at finding the much sought after ore.

It's difficult to imagine that the tiny, pastoral village of Rame, on the Rame Peninsula in south-east Cornwall, is recorded in the eleventh-century Domesday Book, when it was held by the abbey of Tavistock. It was much later, in the 14th or 15th centuries, that a tiny (3m x 2m), sturdy, stone chapel was built over a spring at Rame and dedicated to the 3rd/4th-century St Julian of Le Mans. Legend says that Le Mans was suffering from a shortage of drinking water and when Julian plunged his staff into the ground and prayed, a gushing spring sprang forth.  St Julian's spring feeds a cistern inside the chapel, which is entered by the doorway on the western end. Inside on the south side is a little stone shelf where visitors can leave mementoes and a sink or bath recessed into the floor at the east end. The chapel fell into disrepair, was restored in 1882 by William, 4th Earl of Mount Edgcumbe, and is now a Scheduled Ancient Monument.

Scheduled Ancient Monuments are structures of special historic interest or significance, and range from earthworks to ruins to buried remains. They are not always ancient but they need to be of national importance. The principles for selection, as laid down by the Secretary of State for Digital, Culture, Media and Sport, include rarity, period, survival / condition, documentation/finds, potential, diversity and group value. 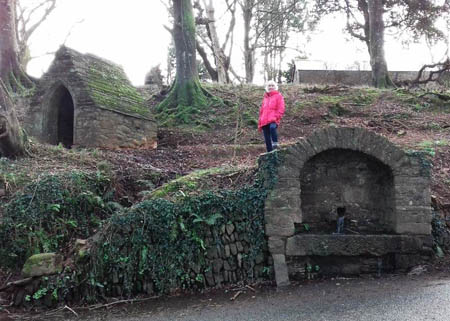 Picture right - Cora at St Julians Chapel and Well on the B3247. The water gushes into the roadside trough.

St Julian's well is far older than Malvern's two holy wells but if you look for information about it online there is precious little. In huge contrast, our two holy wells are extremely well documented in both primary and secondary sources. It is rare to find two buildings bearing much of their original materials, design and use that together tell a group story of culture, health, investment, enterprise, demography, geology and use of a natural asset. Some people go to great lengths to preserve our water features while other people close them down or brick them up. So not only do we need a guardian to preserve our water features but we need someone to put together a document of survival to present to the Secretary of State for Digital, Culture, Media and Sport. Can anyone reading this advise on how to go about it?

- a great vision for the future?

We were intrigued by the recent discussion paper that is circulating regarding the provision of a new Elgar Square and associated developments around Edith Walk in Great Malvern town centre, including a new Visitor and Spa Centre building. Our proposal is that the Visitor Centre should include a section devoted to Malverns Worldwide. This would act as an international focal point for the unique Malverns Worldwide scheme which at the moment is being very successfully pioneered. This project is seen as a new form of interaction between the two dozen or so Malverns around the world. The Visitor Centre could include not only details of the heritage of the Malverns but also present new opportunities for personal contact and visiting. One particular futuristic idea that has been suggested is that there is a Malverns Worldwide experience. Using the latest three dimensional computing and simulator, this would enable visitors to experience what a particular Malvern is like, looking at landscape, history and other matters of interest. This would tempt the public into exploring Malverns across the world as well as attracting visitors from abroad, arriving to learn about Great Malvern, the Hills and Malverns elsewhere. 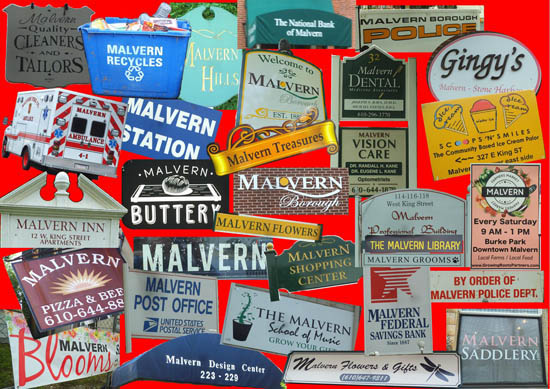 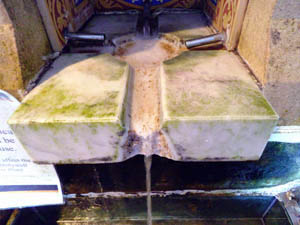 Sadly, after ten years, the water heritage exhibition at Holy Well is no longer open to the public. The room is now used for storage for the bottling works. Fortunately, the large information boards are still in the south room so permanently accessible to visitors. The display cabinet with the Geological sample is now at the Malvern Hills Geocentre, which is part of the Wyche Innovation Centre. Immediately west of the Wyche Cutting, the centre is in Walwyn Road, WR13 6PL grid ref. 76782 43578. After a long walk around the hillside springs, why not have lunch at the centre's Café H20?

Not-so-marvellous marble - Sadly, at the spout at Holy Well, the cruciform slab of marble that replaced the eighteenth-century original is, aesthetically, looking the worse for wear and much unblessed.   How might the algae be removed without damaging the marble? Speaking of marble, the marble Foley Fountain, created in 1830 to celebrate the arrival in Malvern of Princess Victoria and the Duchess of Kent, is also under threat from nature. It was removed from the well room at St Ann's Well in 1892 and moved to the south side of Mount Pleasant where it has since been ravaged by the elements. 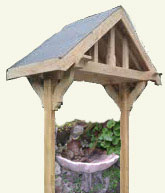 It is nearly 200 years old and one of Malvern's earliest water heritage artefacts. Who could possibly object to it being judiciously covered, perhaps with a small pitched, tiled roof on stilts? Many years ago, drawings were made for an appropriate canopy but there was no funding for the project. Do let us know if you have any ideas on how to take an idea forward a step or three.

DIARY DATE - Well decorating this year takes place 4-10 May. The theme is "year of the woman" and it is the 25th year of what is now the largest such festival in the UK.