Friends are the recognised guardians of Malvern's water heritage (Malvern Gazette 1 March 2013 p.14). We are an independent voluntary group who relentlessly promote research and celebration of the Springs, Spouts, Fountains and Holy Wells of the Malvern Hills and Malverns Worldwide. 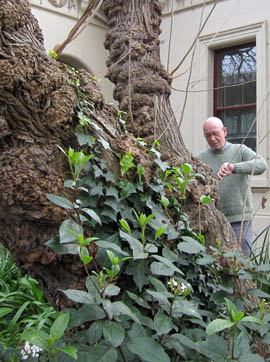 Mulberry Tree cuttings for Malverns Worldwide being taken by Dr Peter May in Malvern Melbourne on 8th August 2017.

In the depths of their winter Peter has now taken cuttings from the George Bernard Shaw mulberry tree in Australia for planned planting in the Malverns in the US. Our thanks go to all the Friends who are making this latest tree project possible.

Cora scoots around the Springs and Wells

We can now reveal a new way to visit the springs and wells around the hills. By car, it means you have to park and jam up the country lanes. By bike, it necessitates having all the right equipment and 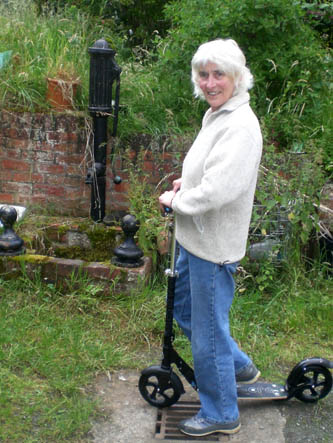 takes a long time. Now you can get an adult scooter and with a bit of practice you can zoom from one to the other refreshing yourself at each location where there is water available. A couple of tips: make sure you have a scooter with wheels that are at least 20 cms in diameter and make sure you know where the brake is before you whizz down the Wyche Road at breakneck speed.

A new scooter can cost you upward of £50.00 and comes with road safety instructions.

The Danzell Spring, north-west of the Malvern Hills, has been the only celebrated spring in that area since the 19th century. Now, a new investigation by a local Friend of Malvern Springs and Wells of the valley to the north-west of the hills has revealed the presence of a medieval Waumswell. This is not to be confused with the Walms Well south of British Camp. As early as the thirteenth century a Stephano de la Welme was recorded in Mathon parish paying the lay subsidy tax. Similarly, in the 14th century a likely descendant Stephano atte Well was documented. Later records then verify the presence of a farm and field names using the 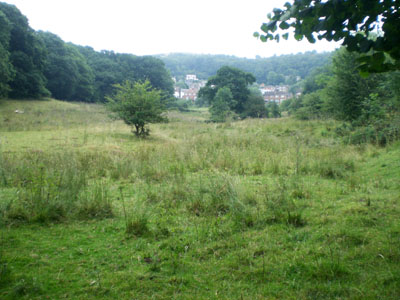 naming, e.g. 'Walmes and Walmspout Coppice'. Waumswell was recorded in 1732, more than a century before the Danzell Spring was dug and named.

Picture left - the Waumswell springs valley looking east towards the Danzell Spring location. Spring water runs into a leat by a gate near where this picture was taken. Walmspout Coppice is the afforested area to the left.

The source of Waumswell lies at the head of the valley near Danzell (later Folly) Cottage at the rear of 151 West Malvern Road. The cottage was built and named sometime between 1827 and 1851. In the late 19th century, a shaft was dug just above the cottage to access the valley water table and provide a public supply, which was named the Danzell (or Damoiselle) Spring. The shaft intercepted the waters that fed other springs lower down the valley, including Waumswell. This imposition led to hostilities between the inhabitants, who had relied on the springs, and the water company who then wanted to charge for a piped supply. 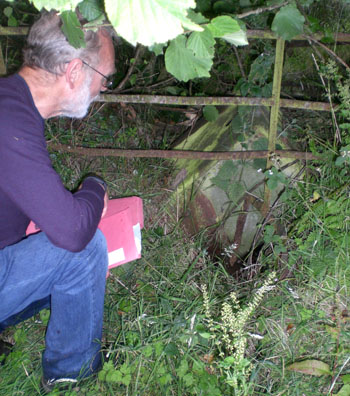 Today the water still flows from the lower springs into a contour leat that runs to the nearby farmhouse. Thanks to George Demidowicz, the early history of these water sources is now revealed. To read this fascinating result of recent research in full go to malvernwaters.com and then to site number C28 on the springs and wells index.

Picture - George explores one of several springs below the Danzell Spring. The old tank was perhaps an abandoned attempt to contain the water for farm or domestic use.

Street Fountains Elsewhere -- from a Friend in the North.

Bede, recording the lives of the Anglo-Saxons, wrote that peace reigned during the time of King Edwin, and anyone could travel in safety from coast to coast. Near clear springs of water, King Edwin had bronze cups attached to roadside posts so that travellers could be refreshed. 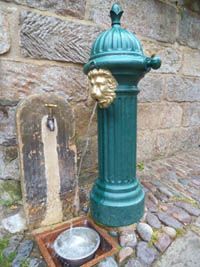 Street fountains also served as domestic water supplies. This original Victorian cast-iron fountain (pictured left) is in Robin Hood's Bay, North Yorkshire. Until the start of the twentieth century, when mains water was introduced, local people filled up their buckets several times a day at the fountain and the adjacent tap. Interestingly some street fountains were operated by turning the handle on the side. 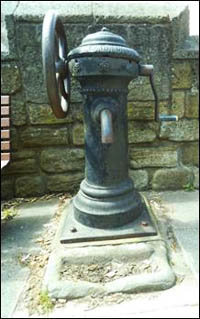 Carter's Well, in Low Fell, Gateshead, (pictured right) was the main water supply in Low Fell until the end of the nineteenth century. It is thought to date back to the seventeenth century, which may explain its unusual construction. It became defunct in 1895, mouldered into dereliction, and was restored in 1994. 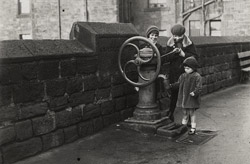 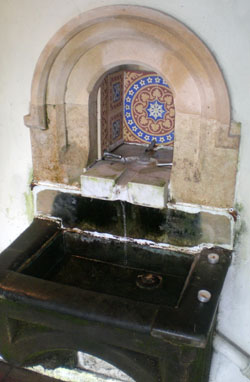 It is always regrettable when our springs and wells get adverse publicity. In the local Malvern Gazette of the 14th July the state of the Holy Well  (see picture left) prompted a letter renaming it the Grubby Spring. What happened to the Well Wardens and the owners? If anyone would be prepared to lend a cleaning hand, I am sure the owners would be pleased for you to make contact. In the meantime, bottling of the water continues as we found out during a recent visit.

A recent trip to Southern France prompted an investigation into a former Benedictine abbey. 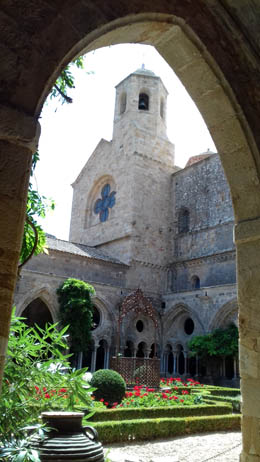 The Abbey of Fontfroid is located near Montpellier and its name, meaning cold spring or fountain, suggested an interesting water source there. A trip to the abbey posed more questions than it answered however. The abbey was founded in the 11th century and clearly has similarities with Great Malvern's  priory. The religious orders survived in this mountain side isolated community until the early 20th century when the monks departed and the site fell into private hands. Now restored, the locality is a popular tourist resort and is illustrated left.

Our own field investigation revealed that the abbey was built in a deep gorge and that a supply of cold spring water enabled a community to be established. This accounted for the interesting name. But when exploring the buildings we came across a fountain that had a marked resemblance to the original St. Ann's spout in the Malvern Hills, England. Located in the former Monks Refectory was the marble fountain illustrated right. Did this have a religious connection that would throw light on Malvern's Benedictine past; after all it was the waters of what is now St. Ann's well that enabled St. Werstan to establish the first religious cell in Malvern? In particular the scallop shell basin has similarities with the original St Ann's basin, now in the grounds of the Mount Pleasant Hotel.

St. James the Great was one of the Apostles and brother to St. John the Evangelist. The scallop shell was his emblem. Tradition has it that his bones came to rest in 'Santiago de Compostella' in north western Spain following his martyrdom. During the medieval period St James became an important sub-culture within the religious communities and a focus of pilgrimage, a practice which continues today. The scallop shell grooves all converge at one point as do the pilgrims. Does this throw light on Malvern's religious past as a possible place of pilgrimage?

During the visit it also became apparent that some of the artefacts now found in Fontfroide were the results of accumulation since the abbey fell into private hands and so any speculation on the relevance to Malvern must take this into account. Our investigations continue. If you have any thoughts on this or would like more details for a possible visit do contact Bruce.

Where was the Malvern Hills Road Train in the last Newsletter?

No, it was not on the M25 skirting London. It originates from the Malvern Hills, a stock rearing range in Queensland Australia. This sparsely populated area is used for cattle/sheep grazing and is situated just off the Wooroolah Creek.

Become a Malvernologist and discover more about Malverns Worldwide

In August we received press editorial in the Johannesburg Express in South Africa detailing our Malverns investigations and possible future visits to the different Malverns across the globe. There is a Malvern in the suburbs of Johannesburg and we are now in contact with local historians and the press there. It was encouraging to have the support of the press in encouraging local people to interact with the two dozen Malverns elsewhere. We will give more details of the African Malverns when it becomes available. In the meantime become a Malvernologist yourself and liaise with Denise and tell her which Malvern you plan to conduct a pioneering visit to. Denise's email is dnspreston@yahoo.co.uk 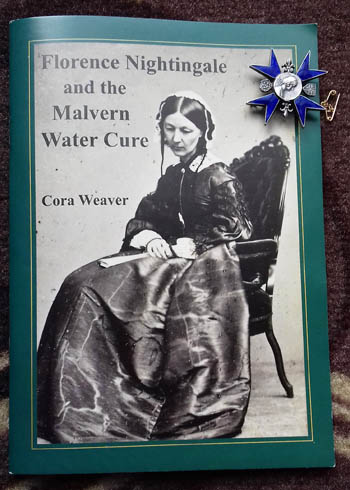 Malvern spring waters played a great part in the recovery of Florence Nightingale after the Crimean War in the 1850s. She had sailed to the Crimea where she attended to the medical needs of the troops. The injuries of the battlefield were accompanied by illness caused through inadequate provision of clothing and food for the British soldiers. On her return from the Crimea, Florence Nightingale was exhausted and Malvern offered her a place to recover her strength. Her reputation as a nurse perpetuates and a Friend has brought the Nightingale Award to our attention. This prestigious medal was awarded by St. Thomas Hospital in London in this case in the early 1990s for significant achievement in nursing. The award dates back to 1925 and the medal is based on the eight pointed cross of the Knights of the Hospital of St. John of Jerusalem. The centre panel of the design portrays the head of Miss Nightingale in relief, with the words, "Schola Sancti Thomae"

In the picture - The Award resting on the cover of Cora's new version of her book on Florence Nightingale in Malvern, obtainable direct from Cora or from our website bookshop for £4.49p.