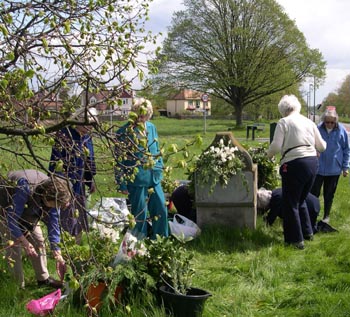 The History of Malvern Well Decorating


The annual decorating of water features in the Malvern Hills has become a major event and the largest of its kind in , if not the world. Of the 130 springs and wells sites, 40 or more are decorated each year as part of the May Day celebrations. Modern day well decorating in the was initiated in 1993 by local historian and author Cora Weaver, who wanted to draw attention to Malvern's rich water heritage. 'Well decorating' described what she wanted to promote, and was not to be confused with Derbyshire's more traditional well-dressing. The press article to the right was the start of the recruitment campaign for the inaugural well decorating.

The earliest written evidence of well decorating dates from 1870, when Ryland's Fountain at was decorated to celebrate 'the presentation of the Royal Malvern Well for the use of the public forever'. This annual event became bigger and better over the next few years, but eventually ceased.  Almost a century passed with no mention of well decorating, but a picture of Wyche Spout decorated in the 1970s still survives.

It was the 1992 publication of Springs Spouts Fountains and Holy Wells of the (Cora Weaver and Bruce Osborne) that led to the inauguration of our modern day well decorating.  The book, which gave details of 27 sites, was launched at the Victorian Weekend celebrations and for the first time gazetteered sites that had been lost or forgotten. The book ran to three editions and each time, as a result of original research and field work, more sites came to light. In 1997 there were 62 sites featured and by the 2001 edition the number was up to 88. In addition, Aquae Malvernensis was published by the same authors in 1994. This was a history and topographical guide to the sites and became the standard definitive reference work on the subject for many years. In 2012 this was superseded by Celebrated Springs of the , again by the same authors. Published by Phillimore, this impressive book put the 130 sites on the map and in turn provided a valuable record of the history and modern day status of the springs and wells.

As more sites were identified, well decorating flourished and in the past few years has been managed by Lionel Shorstone with commendable results. The continuing success of the event was aided by the inauguration of the legendary annual coach tours, conducted by Cora and Bruce during the well decorating celebrations. Subsequently, much of the activity relating to springs and wells came under the banner of the Friends of Malvern Springs and Wells, a new initiative by Cora and Bruce which consolidated the activities of various disparate groups specialising in Malvern waters and related matters.

In 2006 Coca-Cola, bottlers of Schweppes Malvern Waters, sponsored the St Werstan Awards in conjunction with the Friends of Malvern Springs and Wells. Named after the local patron saint of Malvern springs and wells, the awards were created to promote the conservation and preservation of Malvern's water heritage. This award is made approximately once every year and in 2012 was extended to include the Founders Prize for outstanding well decorating.