Seventeenth century mineralisation of the wells

Epsom (Old) Wells are situated on the common approximately one mile south west of the town centre, grid ref. TQ 193600. The 6 inch geological map describes it as "The Old Well, 24ft to Water, Epsom salts". The Old Wells were the main focus of spa activity during the seventeenth century and although it will be shown that other wells existed, the Old Wells were where people resorted for "the cure". In spite of the popularity of Epsom Wells however it is apparent that all was not well.

It has already been shown earlier that in 1653 Dorothy Osborne had recorded that she was forbidden to drink directly from the well and that the waters had to stand overnight to allow the sediment to precipitate. A little later, in 1662, William Schellinks noted that it was practice to drink the waters early. Probably the reason for this was to avoid the muddied waters after the wells had been dipped. But Schellinks also went on to observe that the wells were frequently drunk dry. This indicates that the demand exceeded the supply with the likely result that more mud than water was dispensed when the waters were low. Schellinks also says that rain diluted the mineralised water. This would weaken its efficacy prompting the imbibing of greater quantities.

Another critique of the Wells comes from Celia Fiennes, some years later. In the early 1690s she described Epsom Well as on clay and gravel with waters from alum. The well was without a basin or pavement and she disliked looking down into the dark interior. The spring was often drunk dry and water was carried from common wells to replenish the supply. The efficacy of the water was reduced as a result unless visitors could consume the waters before they were replenished. Here Celia Fiennes made an important hydrogeological observation. Not only does this endorse the reason for early morning use; she also records that the well was replenished from elsewhere and that the "natural recovery" of the mineral water level in the well was slow. This indicates slow movement of water through the aquifer strata and suggests there were other sources of mineralised and other water nearby for replenishing.

With such problems it is not surprising that others sought alternative ways of supplying the demand for Epsom Salts mineral waters. There was one particular series of events which, although enacted out away from the town, was to have a major effect on the future development of Epsom. In the year 1679 Nehemiah Grew, then secretary to the Royal Society, read three papers "On the Mineral Waters about London" and the preparation of salts from mineral waters. He referred to Epsom within the papers although he did not make them available for publication.[1]

Nehemiah Grew was born in 1641 in Warwickshire, son of Obadiah, a Non-conformist preacher educated at Balliol College, Oxford. Nehemiah graduated from Pembroke Hall, Cambridge in 1661. As would be seen as appropriate and normal at the time, Grew became a naturalist and physician. In 1671 Dr. Grew was elected a Fellow of the Royal Society as a result of a paper on the anatomy of vegetables. He then practiced medicine in Coventry and continued his botanical studies at the Royal Society. By 1682 he was appointed curator of the Society's museum. This coincided with the publication of his "magnum opus" The Anatomy of Plants. On the medical front a purgative was developed containing calomel which became known as Pil.Purg.Grew. At about the same time his interest in Epsom Salts led to the reading of the previously mentioned unpublished papers to the Royal Society in 1679. John Evelyn recorded Dr Grew's discourse in his diary, which he attended after lunch on 19th June.[2] Grew's research on Epsom Salts had likely been underway for some years. It is recorded that the first time the salts were obtained by evaporation of Epsom Wells water was in 1675.[3] This was 4 years previous to the reading of the unpublished papers.

Turning his attention to sea water, in 1683/4 Grew published observations on making sea water fresh. It is apparent that Grew was continuing his researches into salts, sea water and related matters, no doubt using Boyle's work of 1684 as a primary point of reference. Boyle had sought to analyse and measure the density of Epsom water, together with that of Barnet, Acton, etc. in an attempt to identify the salts that gave "Purgative vertue". Chemistry was in its formative years as a scientific discipline and in 1684 Robert Boyle published Short Memoirs for the Natural Experimentation of Mineral Waters, in which he made various observations on Epsom Waters.[4]

5.2 The Epsom Old Well in the 1980s showing the Epsom Salts water during construction of the new well head. (courtesy Bourne Hall Museum) 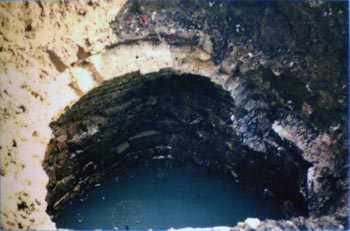 In 1695 Grew published, in Latin, Tractatus de salis Cathartici amari in aquis Ebbeshamensibis in which the first significant light was shed on the nature of Epsom Salts, especially their artificial preparation. The principal salt was identified as sulphate of magnesia and he clarified its differentiation from sulphate of soda. Grew particularly demonstrated that the salts could be taken without the need to consume considerable quantities of water. In addition he outlined the medical indications.[5] In publishing this paper, Dr Grew was the founding scientist of Epsom Salts.

Although it was not until 1695 that Grew formally went public with his discovery of how to manufacture Epsom Salts artificially, the news of his discovery was to have significant repercussions for a town which relied on the efficacy of its well for its prosperity. Grew, in due course, set up a factory for purging salts of a similar nature to Epsom Salts at Acton, hoping to make 20,000lbs (9,070 kgs.) per year.[6] The salt was reputedly sold at five shillings an ounce initially.

Realising the implications of Grew's work, others quickly started manufacturing in competition. Francis Moult, a London apothecary, and his brother George, also a chemist, initially purchased salts from Grew. They investigated other wells near London at Kensington, Dulwich, Lambeth and Richmond. The power of the springs at Shooters Hill was recognised by the Moult brothers and they started using the water for the manufacture of Epsom Salts. They were able to extract greater quantities of salts from Shooters Hill water and undercut Grew's prices. The price fell from sixteen shillings to 3 pence a pound. Dr Hoy shortly afterwards developed a method for extracting the Epsom Salts from the bitterns left after evaporating sea water for common salt.[7] Within a few years salts were being prepared from sea water at Portsmouth, Newcastle and Leamington, and dolomite (magnesium limestone). A similar substance (magnesium sulphate) was later obtained by Hoffman in about 1721, from Seidlitz water in Bohemia.[8]

Dr Grew was having difficulty in protecting his discoveries, particularly from Francis Moult. An English version of Grew's important paper was published by Grew following a spurious publication in 1697 by Francis Moult using Grew's name and translated text, but without Grew's authority. In 1697 Grew quickly distributed A Treatise of the Nature and Use of the Bitter Purging Salt contained in Epsom and other such Waters. He also secured a patent (No 354) in 1698 for "making the salt of the purging waters etc..." This was done by evaporation of Epsom or Ebbisham Waters as was set out in the original Latin publication of 1695. Grew found two drams of magnesium sulphate in a gallon of Epsom Water and for some time this had been the only source of the mineral.

Acrimonious moves and counter moves frustrated Grew's attempts to protect his invention. He was under serious attack by those wishing to challenge his patent on the manufacture of Epsom Salts. He published a defensive document containing testimonials in 1701 and Francis Moult and other infringers were taken to task.[10] Attempts at arriving at a legal arrangement with the Moults were thwarted by claiming that they were now manufacturing on Dr Grew's direction. Eventually the Moults were reprimanded by the Lord Chancellor.

By 1722 the sale of Epsom waters was seen as a cheat. The salts had been expropriated by the Moults and the product on sale was not perceived as the proper salts, as discovered by the worthy physician Dr Grew. Fictitious was the term used to describe the manufactured salts.

"It is difficult to pass by this article without setting a mark upon that abominable cheat which is now sold by the name of Epsom waters. Dr Grew, who was a most worthy physician and industrious experimenter, made trial how much salt these waters would leave upon evaporation, and found that a gallon left about 2 drams, or near, according to my best remembrance, for I have not his writings with me. He likewise found salt thus procured answered the virtues of the water in its Cathartic qualities. Of this, an account was given before the Royal Society in a Latin dissertation. But the avaricious craft of a certain furnace-philosopher could not let this useful discovery in natural knowledge rest under the improvement and proper use of persons of integrity; but by pretending to make a great quantity for sale; translated the Doctor's lecture into English to give away as a quack-bill."

This testimony was published in A Compleat English Dispensary (1722) against a background of rivalry between the apothecaries and physicians for the prescription and dispensing of drugs.[11] It clearly identifies the manufactured salts as a cheat and lays blame on the "furnace-philosopher" and translator of Dr Grew's paper. This is without doubt Francis Moult although not named. It is this promulgation that was, arguably, to herald the demise of Epsom's reputation as a legitimate mineralised water and spa.

Dr Grew had died in March 1712, aged 71, his patent having been earlier assigned to one Josiah Peter, who defended him during the legal wrangling. Grew was a pioneer in the analytical evaluation of Epsom mineral waters. During the eighteenth century the unraveling of the chemical constituents of mineralised waters was to confuse and baffle those who attempted it. It was not until the early nineteenth century that sufficient knowledge of chemical composition had been secured to give Dr Struve the confidence to manufacture a range of European mineral waters at his German Spa at Brighton.[12] Grew's pioneering approach was no doubt stimulated by the failure to resolve the supply problems at the Epsom Wells and the enormous potential market for the purgative. With the publicity that his efforts received, his findings would have been noted with interest by the medical profession, apothecaries and all interested in the spa industry. One such person was no doubt John Livingstone, more details of whom will be considered in due course.