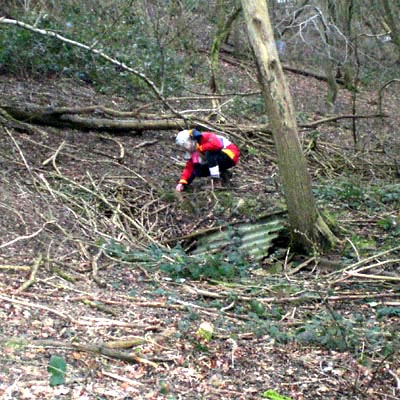 Location: at the southern end of the hills on Raggedstone Hill.
Description: a site that has seen better days but is worthy of some tidying up.

This spring has been contained in the past but is now in a sorry state. The containment has collapsed although it still supplies two nearby metal cattle troughs. To spot the spring follow the contour path around the hill for about a quarter of a mile and it can be seen just above the path on the left. Look out for the broken spout at ground level and some old slabs.

The Shadow of Ragged Stone Hill - It is said a curse befalls all who stand in the shadow of the Ragged Stone Hill on the Malvern Hills. This derives from the story recorded by Charles Grindrod, of a 14th Century monk called John, who as a punishment for seeking the company of a woman was made to crawl on all fours up Ragged Stone Hill daily, while seeking forgiveness. After months of such torment John came to his wits end and whilst staggering to the top he noticed a dark shadow coming over him. He shouted out "I will say no more prayers today, I lay instead my curse upon my punishers. May all upon whom the shadow of this rock falls die before their time, as I do!" With this he fell to his death in the valley below and his body was never found. A spiral dust cloud, in the shape of a monk, however rose from the hill following John's proclamation, whilst all below cowered under the curse thereafter....


More detail of this tale is recorded by C F Severn Burrow in the 1940s. The tragic Monk apparently came from Little Malvern Priory and the Prior who passed sentence was also living a life of profligacy, to the frustration of the recipient of the cruel punishment. The final laying of the curse was dramatised in Jean Corke's "The White Witch of Welland" with the Monk raising his arms to make a cross before falling dead.

The spirit of a prophecy is on me:
I see beyond the veil of Life and Death!
While kin of mine exist on earth
As witness to the crime ye did upon me
The Shadow shall strike Death upon its victim. [1] 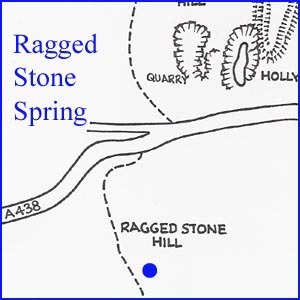