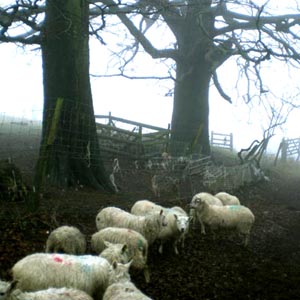 This circular brick well has water at a depth of about 5 metres (15 feet) and about a metre diameter, brick lined. Richardson identifies it as within the Llandovery Beds, and about thirty five feet deep. This makes the water 20 feet deep and not the place to fall in to. It was probably built specially for mixing the lime mortar to build Harper's Cottage which, for many years, was the rented home of the Gardiner family.

In November 1915 William Byrne bought a piece of land near Gardiner's Common and wanted to improve the roadway over the common to make it suitable for motors. The Conservators agreed but said it must not be more than 12 feet wide and no fence was to be erected. This was probably the site of The Kettle Sings Cafe and Baxhill House which, by 1936 was occupied by the Attridges: Mrs Attridge ran The Kettle Sings.

In 1993 Malvern Hills Conservators bought the 8-acre field in which Harper's Cottage once stood. On an old plan of the field in the Conservators' records was a rectangle which may have represented the cottage which used the well. By 1992 the cottage had been demolished and the well covered by several concrete slabs. Within a few weeks of the 1993 acquisition one conservator visited the site and removed the slabs to investigate the well. Unfortunately his dog fell down the well, which fortunately had been partially filled with sticks and rubble and was only 12 to 15ft deep. The animal was safely retrieved and shortly afterwards the conservators fenced off the well. The well is no longer used and a few scattered bricks and pieces of tile are all that remain of Harper's Cottage.

From the hillside there are magnificent views towards Wales. One day it is hoped that a feature can be made of this site, possibly by opening up the well to make a sunken water 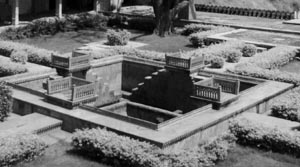 garden with steps down to the water similar to step wells found in India, albeit on a smaller scale. Step wells are water sources where the water can be reached by descending sets of steps. They date from the late 6th early 7th centuries and are often architecturally magnificent. By quarrying down they could reach a source of dependable, year-round groundwater. Building upward, masons lined the walls of the excavation with stone blocks and paved the slope with stone stairs thereby giving access to the water. Such an installation on the Malvern Hills would render the present well much safer as well as provide a stunning facility for visitors.

1. Commoners sheep now guard the well on a cold winters day.
2. The well before a fence enclosure was placed around it. 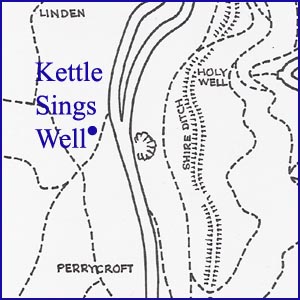