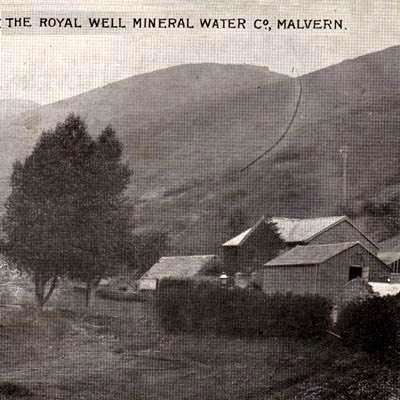 The tall building on the left hand side of the road heading south is the old Brewery generally dated 1905, although a similar building existed on the site in the 1880s when the Royal Malvern Spa was built.

The Brewery - A brewery business was established here in the mid nineteenth century and we learn that in 1860 William Wickam travelled from London by stage coach to Malvern to take up the post of foreman to the Royal Well Brewery. (He later moved to the Colwall Malvern Water Bottling plant as foreman.[1]) A brewery needs water, and a substantial underground gusher emerging from the Pre-Cambrian rocks at the Western Boundary fault was piped to a cistern underneath the 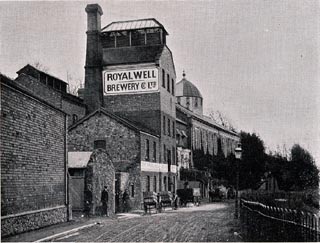 brewery here, then pumped to tanks on the hill to provide a head of water for the brewing vats. A second, and very substantial water source was discovered near the brewery c.1870. According to the local newspaper at the time of the opening of the new well, it yielded 7 gallons per minute, (10,080 gallons per day), 7,000 gpd more than the Holy Well.[2] However L. Richardson noted that the original flow rate of the Royal Well was 18,080 gallons per day.[3] There was so much water that a water bottling works opened on the site.

C.1870 the Royal Malvern Well Aerated Water Works was built over the well and the Royal Well Mineral Water Company bottled here from c.1870 until the early 20th century, producing a range of products including seltzer, soda and potash waters, lemonade and gingerade. Although the management changed hands several times over the years, the brand name - Royal Well Mineral Water Company - remained unchanged. 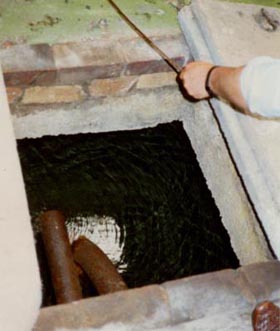 The water bottling proved most beneficial to the Jenkins family when a female relative of old Jenkins, whose cottage William Ryland had acquired, (see Rylands Royal Malvern Well) made a lot of money through owning the property where the Royal Mineral Water Works and Brewery were built. The Royal Well Mineral Water Company operated here from the 1870s to 1901, producing a range of products including Seltzer, Soda and Potash Waters, Lemonade and Gingerade.

At the beginning of 1890 Lord Wimborne was privileged to entertain at his home both the Prince of Wales and Prince George, and especially for this occasion he ordered all his mineral water from the Royal Malvern Well Mineral Water Company. The waters were apparently highly praised by H R H the Prince of Wales 'who drank the pure Royal Well water with great relish.'[4] Bottling at the Royal Well has resulted in a large variety of bottles being left for posterity, including round-ended Hamiltons, Codds, flat bottom Hamiltons, and hybrids, and Malvern Museum has a collection on display. 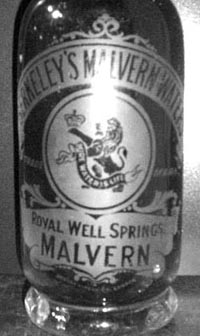 In 1901 the mineral water business was taken over by Allen Bros of Newtown Road, Malvern Link. Two years later, in 1903, The Royal Well Brewery, using the same trade mark as Allen Bros, took over the business,[5] only to be taken over themselves after a short while by Messrs Berkeley & Co. Berkeley's trade mark sported a lion rampant holding a crown and a motto "Pure Water is Life". They were almost certainly also bottling from more than one spring including perhaps the old St Thomas's spring, which is why the label on the Berkeleys soda syphon clearly states 'Malvern Waters from the Royal Well Springs'. This company remained active until the 1940s and was the last to bottle at the Royal Well.

By the 1930s the mineral water bottling factory was using a well 9 feet deep and 4 feet in diameter. It's outflow, known as the 'Fountain', supplemented the supply to Ryland's roadside spout and the houses above the brewery, which were dependent on the Fountain until mains water was installed.[6] Like Hay Slad, the Royal Well was protected under the Malvern Water Act of 1905. Clause 26 (1) stipulated that the Council might not interfere with the fountain, thus recognising the importance of the source to local residents at the time.[7]

Today water bottling is strictly controlled under EC regulations; the bottling conditions of the past were informal and apparently unregulated. As a lad in the 1920s local man Mr Loader worked at the bottling works. He recalled his job of 'sighting'. In those days the water was bottled by hand and his job was to hold the bottles up to the light to see if there were any bits floating about. If there were the water was emptied out and the bottles refilled. The 'bits' were usually particles of bracken that crept in after a particularly heavy rainfall. Mr Loader said that in those days the water was taken up by donkey to the two sisters who ran the tea rooms at the Worcestershire Beacon.

Now the brewery at West Malvern has been converted to residential accommodation. Its spring water runs to waste and forms the source of the Purlieu Brook.


Illustrations:
1. Royal Well Mineral Water Company card showing the works buildings and just visible is Ryland's Spout pillars behind the hedge. (courtesy Chris and Roland Bannister)
2. The same buildings as in 1 on the northern side of the tall brewery building, now domestic accommodation. Ryland's Spout is on the extreme right.
3. The brewery from an advertisment for bottled products circa 1880. The Spa Hall is the building with a cupola to the right of the picture. Ryland's Spout is out of sight to the left of the building extreme left.(courtesy Brian Iles)
4. The spring in the basement of the brewery.
5. Berkeleys Malvern Waters soda syphon from the Royal Well Springs. 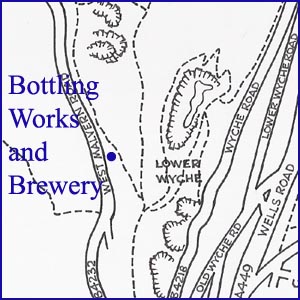