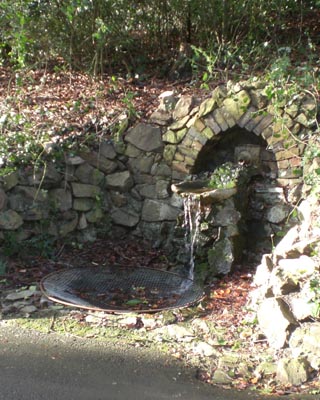 Location: on the left up the drive to Hill House (formerly The Lodge) off Worcester Road, Malvern.
Description: an ornamental spout and basin, still flowing.

During the 19th century, when Malvern was a fashionable spa town, The Lodge was let out during the `season' to wealthy patients. In 1849 Charles Darwin stayed here while seeking health at the hands of Dr Gully. Darwin wrote to his sister, Susan, 'We have taken a house for two months, and have been here a fortnight. I am already a little stronger...but Dr Gully feels pretty sure he can do me good, which certainly the regular doctors could not...& I feel sure that the water cure is no quackery'[1] Years later his son George, barely three years old at the time of the visit, remembered the fountain, which can still be seen set in a niche leafed round with holly and ivy on the left of the drive. Later, after Darwin's visit, the Lodge became the residence of Sir Henry Lambert, Bart. (1822-1872). He was the autocratic Chairman of the Local Board and nephew by marriage of the equally autocratic Lady Emily Foley.

The spout and basin are reminiscent of the Foley Fountain and basin formerly at St Ann's Well, except that from the spout is a fairly constant flow of water, just as there was in 1881 when a 2 inch main was laid to take the water from the Lodge Spring via Worcester Road to Bank Street.[2] There is a collecting tank for the spring located up on the bank behind the fountain. The top of the tank was damaged some years ago during work on the nearby transmitter mast. Repairs were carried out by a local landscape contractor and the tank now has a secure metal cover. 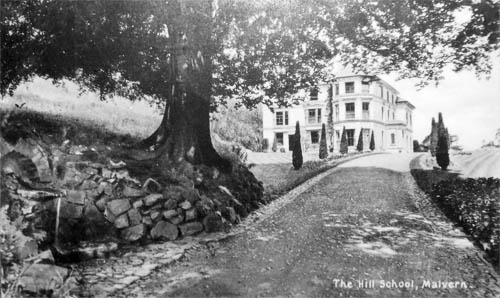 In 2000, concern was expressed following building works above the Lodge Spring. The spring is at best seasonal and developments associated with the aerial masts possibly threatened the flow. The alarm proved false.[3]

Also on the left as you go up the drive to Hill House is Malvern's only funicular railway. This is not a passenger version of the type proposed on many occasions to take visitors to the top of the Beacon but is used to service an aerial mast. One hundred years ago the local Gazette reported that the Light Railway Commissioners had been approached with a scheme to run two inclined railways up the Malvern Hills. One was to reach the top of the Worcester Beacon from the town centre; the other to extend the first from the beacon down to the Colwall Road on the western side of the hills. In 1910 several Malvern residents wrote to The Times opposing the planned funicular, indiscreetly declaring that it would contaminate the town's water supply. The council, the hotel and lodging-house keepers, and the well-to-do residents of the town were horrified at the suggestion and the council surveyor confirmed that contamination of the water supply was impossible. One of the fiercest opponents 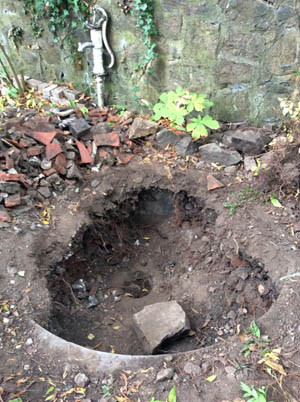 of the scheme was hydropathist, and friend of Edward Elgar's, Dr Charles Grindrod who wrote that, 'Malvern is one of the easiest of nature's beauty spots to spoil. Already its beauty is half-destroyed by badly-devised paths, incongruous buildings and above all the hideous quarries which in most places would have led to a more vigorous protest...'.[4] A funicular would have delighted the sedentary Charlotte Shaw, who disliked Malvern, unlike her husband George Bernard Shaw, who was often seen striding across the Malvern Hills. In spite of optimism at the time the schemes have come to nothing.

In 2018 an interesting water feature came to light in a house garden in Graham Road, Great Malvern. This is a pump and five foot x two foot circular reservoir or pond and likely dates from the early 20th century when the houses were built. Being downhill from The Lodge, it is possibly the containment of the watercourse down which water from the Lodge Fountain once flowed. Initially used as a supply for the builders it later became a garden feature before being lost, awaiting rediscovery. See the picture left supplied by the owners.

1 The Lodge Fountain is similar to the Foley Fountain of 1830 except that there is still a fairly constant flow of water from this spout.
2. Cora's book on Darwin available from the bookshop - click menu left.
3. The earliest known picture of the Lodge Fountain circa 1950 when the house was a school.(C and R Bannister)
4. The Graham Road garden feature unearthed. Our thanks to Anne and Jonathan for access to their discovery. 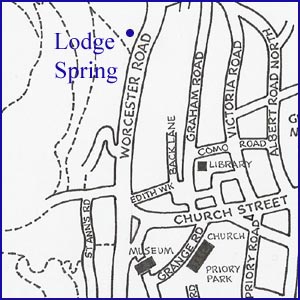 The map below is a small section of our more comprehensive map of the area. For the complete map together with a description and history of this site see "Celebrated Springs of the Malvern Hills" (2012).
Click on Website below or the top banner to go to the DISCOVERY TRAIL INDEX of springs and wells.