Friends are the recognised guardians of Malvern's water heritage (Malvern Gazette 1 March 2013 p.14). We are an independent voluntary group who relentlessly promote research, conservation and celebration of the Springs, Spouts, Fountains and Holy Wells of the Malvern Hills and of Great Malvern as a Spa Town.
Malverne New York declares 19 October 2016 Malvern England Appreciation Day.
The Malverns Worldwide project has enabled Friends to make contact with many Malverns world-wide and we have recently returned from Malverne New York. The formal visit was endorsed by Malverne NY proclaiming the occasion 'Malvern England Appreciation Day'. The American Malvern is spelt with an extra "e" and was incorporated as recently as 1920. The extra "e" was the result of a spelling error by the railroad and has perpetuated ever since. Like our Malvern, Malverne NY also has a fountain which can be found outside the railroad station. Located on Long Island, the village covers an area of around one square mile just off the Southern State Parkway. It has a shopping centre, and all the facilities of a modern stylish township and is within commuting distance of the centre of New York. 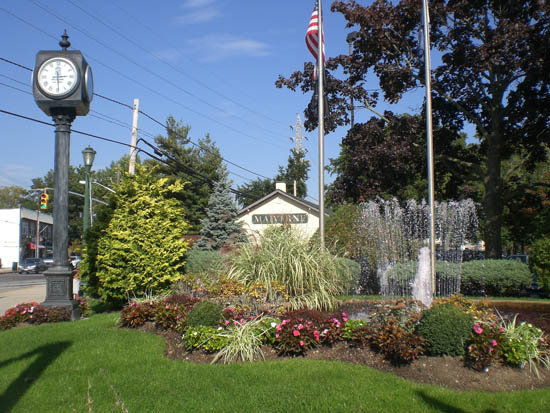 In the pictures:
(1) The fountain outside the railway station commemorates those who lost their lives fighting for their country in the wars of the twentieth century.
(2) The mayor of Malverne NY Mayor McDonald, exchanges gifts with Cora and Bruce from England. 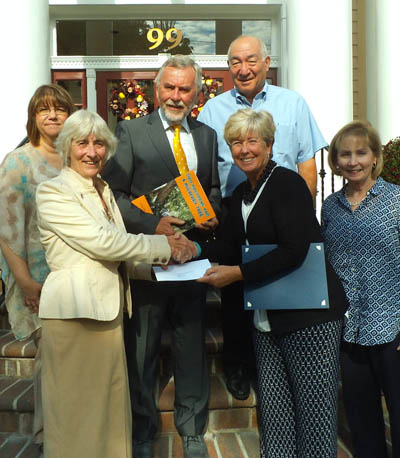 It was a great pleasure to meet the mayor of Malverne NY during our visit and to present her with a letter from Cllr Palmer our mayor in Malvern England. We also took the opportunity of leaving a number of momentous of our Malvern, including a copy of Two Malverns and a Mulberry Tree, which created a lot of interest amongst those in Malverne.
In return a number of gifts were presented to Friends to bring back to the UK and these included a proclamation for our mayor. The Mulberry Tree project that we outlined prompted the suggestion that planting George Bernard Shaw Mulberry Trees world-wide would be an excellent way of cementing our friendship. This is something that we will look into for the future. 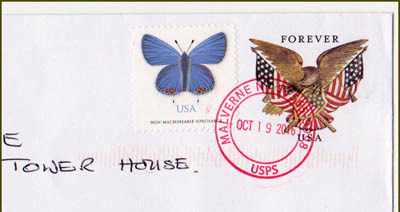 Picture left: A rare postmark on an envelope for mail sent from Malverne NY to the United Kingdom on 19th October, Malvern England Appreciation Day 2016. 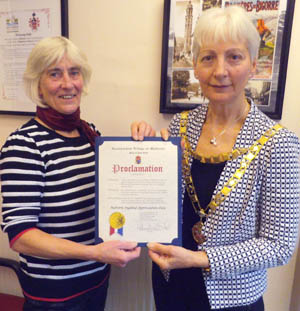 Picture right: Reciprocal presentation in Malvern England of the US Proclamation by Cora Weaver to Mayor Cynthia Palmer in November.
For more details of this and other Malverns go to www.malvernsworldwide.info

New Brine Well in Droitwich
News is coming in of the opening of a new brine source in Droitwich. In October the newly renovated supply pipeline flowed for the first time in over a century.
New pipe work has been installed on the Tower Hill site at the last remaining brine well in the locality. It was 900 years ago when St Richard de Wyche gave an episcopal blessing to make the brine flow. Droitwich subsequently became renowned for its extensive saline waters which were heavily exploited as a major industrial source of salt. Later Droitwich 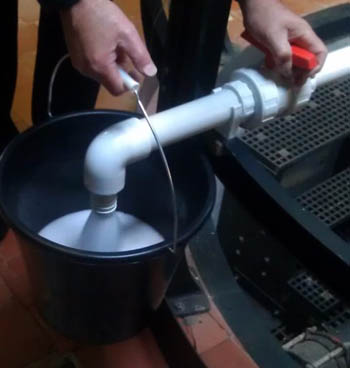 became a spa resort and built a reputation for healing using the saline waters.
Picture: Brine starts flowing again in Droitwich for the first time in almost 100 years.
Councillor Bob Brookes led a team of officers from Wychavon District Council to test out the new facilities.at the last remaining 'active' brine well in Droitwich, which is already used to supply brine to the town's Lido. The well is over 100ft deep and is potentially a prolific source of concentrated brine for which Droitwich is famous. Today the town can boast modern engineering techniques with a pump submerged about 30ft down the well. The initial assessment of the new source was a resounding success with the system working perfectly. Samples of brine were drawn off for analysis. They will then be tested to ensure they are pure and fit for human consumption. The participation of Wychavon District Council made the project possible as the first step to resuming small-scale salt production in the town.
There is much to do before we can put Droitwich salt on fish and chips. If the brine passes the analysis, a modern version of the traditional open pan method used in Droitwich for thousands of years will be tried out. We look forward to the outcome although possibly modern engineering will avoid smoke billowing across the landscape as the fires are lit beneath the giant pans.
We are grateful to a Friend for alerting us to this exciting development.
Mystery donkey spout 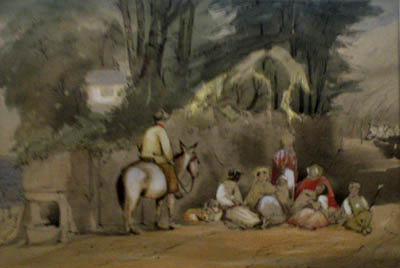 The picture on the right is by Mary Brandling and dated 1850. It comes from a collection of rarely seen pictures that Brian Iles displayed at the Priory recently. It appears to show a donkey spout or watering point on the left. The question is where is it? If you have any ideas do let us know.
St Werstan - Founding Father of Malverns Worldwide and Patron Saint of Malvern springs and Wells.

The story of the creation of the many Malverns worldwide starts circa 700 AD when a monastery was founded at Deerhurst in Gloucestershire. The story then jumps to 1016 AD when the last of the Danish incursions took place, an event incorrectly believed responsible for Werstan's death. The year 1041/2 AD saw the accession of a new King, Edward the Confessor and Wulstan become prior of Worcester. This is the background to a monk Werstan from Deerhurst relocating to the 'Mauberne Hills' where he established a small religious cell in 1053 AD. The timing was not good because the Irish and Welsh both resented the intrusion of the religious establishments from the east. As a result in 1055/6 violence broke out and priests were killed in Hereford and Werstan was slain in Malvern.
Edward the Confessor then granted a charter to Aldwyn, a monk from Worcester to re-establish the cell originated by Werstan in Malvern. Deerhurst goes into decline and the Deerhurst estates passed to the King and Westminster. In 1062 Wulstan is conferred as Bishop of Worcester.This created a dichotomy in that Aldwyn was from Worcester but Werstan was from Deerhurst and so who claims to own Malvern? 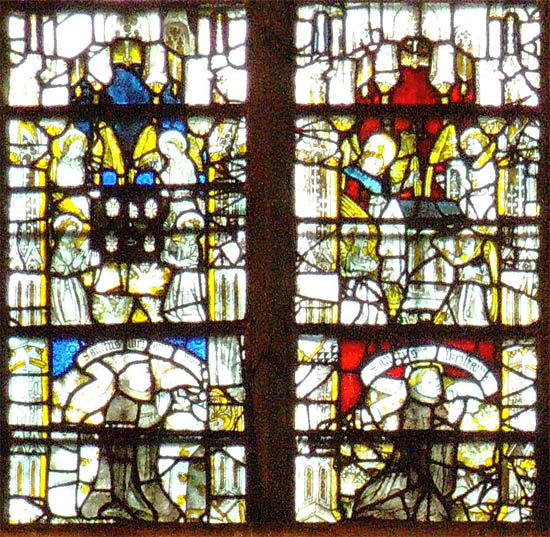 In 1066 AD, the year of the Norman Conquest, Edward the Confessor died and the monarchy briefly passed to Harold. The 1066 Battle of Hastings resulted in William the Conqueror becoming king. In order to develop the Malvern religious establishment further William in 1085 granted a second charter to Aldwyn and a full scale priory resulted in Malvern.
This story is recorded in the late medieval windows of the Malvern Priory which have survived the 1539 Dissolution of the Monasteries by Henry VIII. The reason being that the priory was designated the parish church and was not damaged to any great extent. Known as the Founders Windows, they are difficult to decipher, high up on the left hand side as you approach the altar. St Werstan is named as the Martyr Saint in the windows and appears in three of them. The fourth features the king granting Aldwyn his charter(s). Today window three and four have become transposed due to repairs over the centuries. Investigations ten years ago clarified the history of St Werstan and the opportunity was taken to adopt him as the Patron Saint of Malvern Springs and Wells. 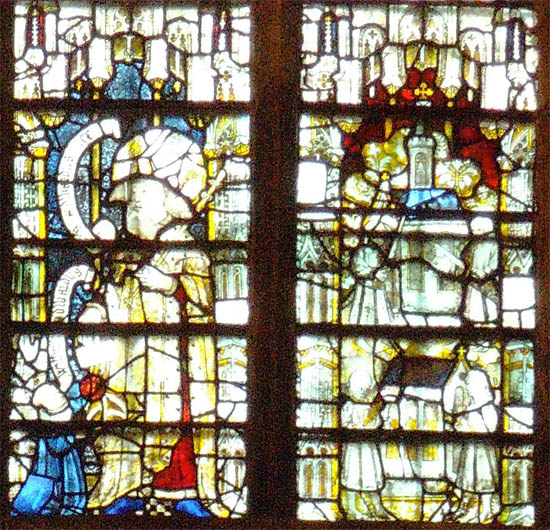 Today we can see that St Werstan was the acorn that grew into the oak tree, a metaphor for the 24 Malverns around the world. For more details of the creation of Malvern, read The Illumination of St Werstan the Martyr (2006 reprinted 2012) by Cora Weaver and Bruce Osborne, price £9.99 available from the authors and on-line from our web site - see below
Illustrations: The Founders Windows
1,(Werstan's vision)
2,(Werstan's chapel/dedication)

3.(Aldwyn's charter),
4.(Werstan's martyrdom) in the order they are today.
In the Priory they are followed by 5-8 which illustrate William the Conqueror, Bishop Wulstan and other persons who sponsored the establishment of Malvern Priory.