The Hands of Friendship Reach Out
Following on from the success of liaising with Malvern in Victoria Australia about the George Bernard Shaw Mulberry Tree, we are now extending the hand of friendship to other Malverns around the world. There are about 24 and we have already visited some of them. Our next stage is to set up some form of communication with key residents in each locality. That in turn will, we envisage, lead to a plethora of projects emerging which will bring the family of Malverns together.
Our first step has been to develop a database and this is now featured on our new web site page. To view it go to malvernwaters.com and click on Web Site Index; then scroll down and click on Malverns Worldwide; alternatively go to www.malvernsworldwide.info or click on Malverns Worldwide above. 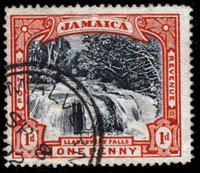 Picture - a clue to discovering another Malvern; a colonial Jamaican stamp with a Malvern postmark.
We would welcome the involvement of local residents from our own Malvern in England as well as those abroad so please contact us if you have any ideas that you wish to share on how the project might develop. In due course we hope to produce a Passport to the Malverns to act as a guide to those who feel inclined to participate in the project and perhaps visit these faraway places. 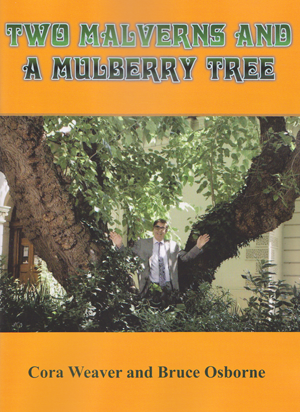 Mulberry Tree Update
The scheme to replace the fallen George Bernard Shaw Mulberry Tree in Priory Park came to successful fruition on the 25 June and was detailed in our last newsletter. The book that was published to celebrate and record the amazing story and event was available on the day and most of the 100 produced were sold. We have a few only remaining copies and anyone who wishes to secure a copy should contact Cora or Malvern Museum a.s.a.p., price Â£6.00 each including P & P. (click picture for more details)
Since August 2009 when the six Mulberry Tree cuttings arrived from Australia we have been responsible for securing their healthy growth with the assistance of experts initially at secret locations. So what happened to all six cuttings? The good news is that all six survived and have grown. The two very healthy cuttings are now in Priory Park Malvern. One by the commemorative plaque unveiled in June and a second at the southern end of the Malvern Theatres complex. Another cutting went to the Shaw Society and is now planted in North London. One went to the Mount Pleasant Hotel in recognition of the assistance they gave during the unveiling celebrations in June. The Mount Pleasant Hotel always had a mulberry tree and we hope that this will reinstate their lost tree. This leaves two cuttings that did not grow well. Both became pot bound and stunted. It was decided that these were not fit for public locations and so one has been planted in Tadworth in the grounds of a local house of some repute and another in a prominent position in a garden in Malvern. We are pleased to report that in spite of major reservations, both trees have gone from strength to strength and will likely survive to grow into splendid reminders of this project as well as a source of next generation cuttings for future projects such as Malverns Worldwide. 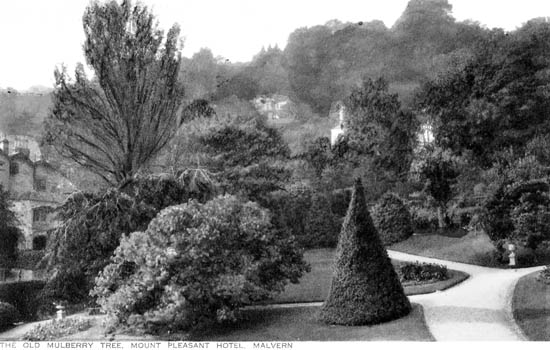 In the picture above: historic view of the gardens of the Mount Pleasant Hotel, showing the former mulberry tree next to the conical conifer.
Unique Malvern creativity throws new light on a bottle 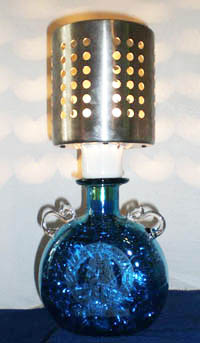 The Malvern Spa Tourism Association (MSTA) was founded in 1992 as a means of generating themes for tourism development in Malvern. Bruce representing Birmingham University and Cora were members and the first ever book listing our Springs and Wells was published by Cora and Bruce in the same year to coincide with a new Victorian Festival. Later the MSTA  was reformulated and the spa dropped from the name. During this era a decorative 'Pilgrim Flask' was created and a copy presented to the Queen. It was rumoured that she asked where the stopper had gone, alas there was not one.
The flasks for those lucky enough to have one, have stood on the shelf ever since, displaying the Malvhina logo for all to see but few to make use of. Until recently that is. In a moment of creative genius and with a bit of ingenuity, a neglected flask has been turned into an attractive lamp by Bruce. With the help of a drill and a cutlery strainer, the table lamp now provides a useful purpose and at the same time throws out its distinctive light pattern to the surrounding room.
As it says in the recent Mulberry Scion by Myfanwy Fox "creativity is a seed within each generation: nurture it because it's what our future hopes will need to find answers in a world as yet unknown."

by Myfanwy Fox written for the Mulberry Tree unveiling 25 June 2016.

Some card, some spin, some dye their world in drab
or vivid hues foregrounding spring-born rills
or clouds or clods or falling leaves, those slabs
of granite quarried from the Malvern Hills.

As moths eclose, so unexpected yet
ordained, creativity is a seed
within each generation: nurture it
because it's what our future hopes will need 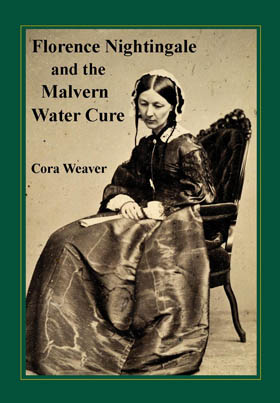 
NEW - Florence Nightingale and the Malvern Water Cure
In 2010, to commemorate the centenary of the death of Florence Nightingale, Cora published a book about Florence Nightingale and the Water Cure. Before her horrific experiences in the East, 1854-6, Miss Nightingale visited spas at Matlock, Cheltenham, Umberslade Hall (Tanworth-in-Arden), Harrogate, Malvern, Carlsbad and Franzensbad. However, when she returned to England in 1856 suffering complete mental and physical exhaustion, she chose Malvern as her hospital and the Water Cure as her medicine.
Cora has now published Florence Nightingale and the Malvern Water Cure on the 160th anniversary of Florence's return to England from Scutari. The booklet explains her relentless, recurring illnesses, the doctors she saw and the establishments where she stayed. If anyone is in any doubt about her severely debilitating state of health, which plagued her for decades, this is a must. The material for the booklet was gathered over two years of reading original letters - at the Wellcome Library, the British Library, the archive at Claydon House, Buckinghamshire (where Florence's sister Lady Pathenope Verney lived), from a collection of biographical works on the life of Florence Nightingale and from original reports of the appalling conditions in Scutari and the Crimea in the first six months of the campaign.
The new 28-page bookl is well-illustrated and contains many extracts from original letters. Priced at £2.99 plus £1.30 P & P it is available from Cora (cora@malvernspa.com).

Misleading Slip-ups Awards
THE BIG OOOOOOOOooooopps! - WHERE WE SPOT THE BANANA SKIN SLIP-UPS
We often see misunderstanding or misleading information lead to problematic outcomes, some is deliberate and some is unintentional. Even we drop the odd clanger.

Whatever the reason, good or bad, there is no real alternative to the truth, properly presented, leading to good decision making. With this award we seek to set the record straight.

Mulberry trees have been in the news lately in Malvern with the recent unveiling of the Shaw tree in Priory Park. Grown from a cutting of the Shaw tree in Malvern Australia, it was a long term project to replace the original tree planted by George Bernard Shaw in Priory Park in 1936.
Imagine our surprise therefore when we discovered a Mulberry Tree in Losely Park, a stately home and grounds near Guildford in Surrey. Situated next to a majestic Lebanon cedar, the Losely tree was planted reputedly by Elizabeth I. Unfortunately the Loselyl tree fell down during the Second World War, but the fallen trunk was left on the ground. Within a short while the trunk had re-rooted itself and a number of new shoots emerged from the remnants of the former free. Over the years these have developed as can be seen from the photograph. 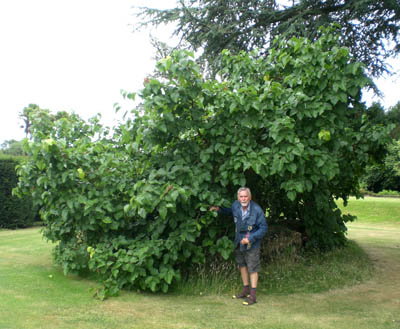 Today the tree is in fact a multiple thriving mulberry clump bearing delicious fruit as Bruce found out.
The question arises, what about the original GBS Malvern tree in Priory Park? Had the remnants of the fallen tree been left where they fell in the year 2000, would the tree have re-established itself? We can only ponder the possible outcome because the council, with the best of intentions, quickly cleared the fallen debris at the time. Fortuitously its offspring survived in Australia and we have had the wonderful opportunity of working with charming friends on the other side of the world over many years to restore the presence in Priory Park.
As they say:
"Morus tarde moriens morum cito moriturum," which translates to "the tree dies slowly; the fruit dies quickly." (taken from the frieze in the drawing room at Losely) 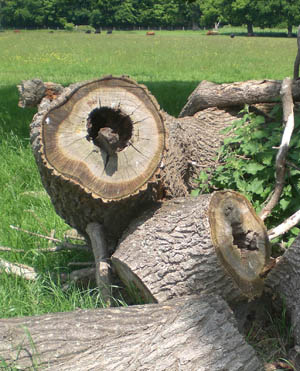 When we were in Marienbad in the Czech Republic recently with the Civic Society we came across a most interesting tradition with containing the springs and wells. Marienbad and the surrounding countryside is famous for its numerous water sources, many of which are mineralised. The application of mineralised waters for the water cure has made the town legendary and this tradition continues to this day.
While visiting the Marienbad Museum we noticed a hollow tree trunk with water in. What this turned out to be was a real life replication of the containment of a spring. What happens is that a water source that emerges from bedrock is dug down to. This can result in a hole up to three metres deep. A hollow trunk is then placed in the hole vertically. It is then packed in with the subsoil. The result is that the spring water rises in the hollow truck. From here it can be tapped off and utilised. This would not be suitable for drinking water but fine for other purposes such as horticulture. The use of a suitable pipe made from modern materials would help overcome this limitation. 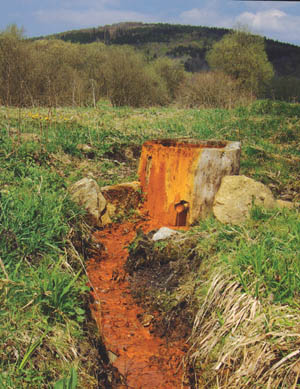 Jaromir Bartos was the gentleman who explained this at the museum and we were delighted to be able to take away his new book on the subject "Krajem Zivych Vod". The pictures show hollow tree trunks and a spring contained. The rich orange colour is due to it being a chalybeate or iron bearing source. The iron content deposits as it oxidises on exposure to the oxygen in the air. A good test for iron water is crushed oak galls. The powder turns bright purple when put into chalybeate waters. We know because we have tried it with startling results at The Pantiles in Tunbridge Wells.
Tribute to Well Decorator Extraordinaire
Well decorating in the Malvern Hills was initiated by Cora in 1993 but for the last eight years has been run by Lionel Shorestone. His leadership has inspired increasing numbers of springs and wells to be included in the annual festival. It is with great sorrow we record that he died recently aged 75 years. His interest in matters spiritual was an inspiration to many and his memory will live on.