LAST MINUTE REMINDER - Events Day Saturday  25 June 2016
The new George Bernard Shaw Mulberry tree will be unveiled in Priory Park at midday on Saturday 25th June, by Australian Ambassador Di Foster.
Programme for the day. Everyone is welcome.
10.30 - opening of Malvern Civic Week ceremony Belle Vue Terrace.
12.00 - Unveiling of the Mulberry Tree plaque and tree in Priory Park includes free ticket for refreshments reception and free entry to Malvern Museum that afternoon.
1.00 - Mulberry Pie and tea/coffee reception hosted by the Mount Pleasant Hotel. Free tickets for tea / coffee and mulberry pie to those attending the unveiling at noon.
7.00 - Mount Pleasant Hotel - an evening hot and cold buffet meal followed by presentations etc. A few remaining tickets at  £15.00 each are available from the Great Malvern Hotel in Graham Road or order from cora@malvernspa.com. Deadline for tickets 10th June.
Finish about 10.00pm.

See our previous Newsletter 71 for more details. It is on-line on our web site. This is a chance to thank all the many participants in this project over the years and Coca-Cola for their continued support.

At the Well Decorating over the May Day weekend the prestigious Founder's Award for well-decorating has this year been presented to Susan and Ian Woodcock for their decoration of Weaver's Well in Malvern Wells. The theme this year was "Friendship", with a particular emphasis on the formal twinning on 30th April between Malvern and Bagnčres de Bigorre, the French spa town at the foot of the Pyrenees. To find inspiration, Ian and Susan spent a week at the French spa with its stunning backdrop of the snowy Pyrenees. 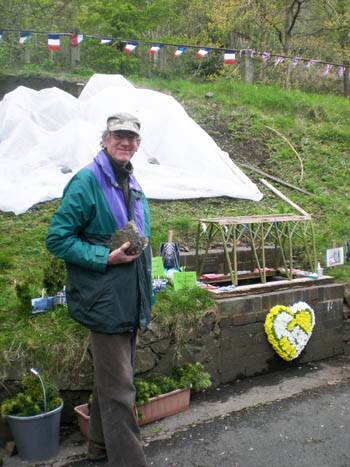 Photograph 1 - Ian puts the finishing touches to the creation.
On their return, the couple recreated the essence of Bagneres de Bigorre on the slopes of the Malvern Hills. Their reconstruction included the baths, cyclists representing the Tour de France, which passes through the town; walkers, bathers and sunbathers. On the hillside behind Weaver's Well, the white, peaked Pyrenees were recreated complete with skiers and, linking the town and mountains and, would you believe, a cable car. Following recent public debate this is the first, and probably the only cable car to operate on the Malvern Hills. Another first for Susan and Ian!

The award is a heavy, cast brass plaque and depicts St Werstan, founder of Malvern's first priory in the mid-eleventh century and patron saint of Malvern's springs and wells. He is seen kneeling on the Malvern hills with a fountain in the background and is surrounded by architectural details from the present Priory Church, flowers of the earth and stars of the firmament. The award is sponsored by Coca-Cola and the plaque designed for, and supplied by, the Friends of Malvern Springs and Wells. 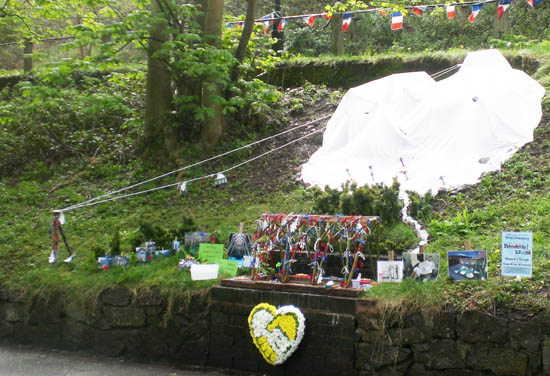 Photograph 2 - The Bagneres de Bigorre cable car and the Pyrenees were reconstructed over Weaver's Well.
Another Twin
In our next Newsletter we plan to cover the visit to Marienbad, another Malvern twinning town. Here we explored the famous Czech musical fountain and its possible application to the Elgar Fountain in Malvern town centre, England. Are there lessons to be learnt from this Eastern European spa town?

Water, Water, Everywhere, nor any drop to Drink.

This quotation by Samuel Taylor Coleridge in The Rime of the Ancient Mariner reminds us of the often forgotten importance of water in shaping our presence on planet Earth. In the Malvern Hills there is a vast reservoir of water that manifests itself as springs around the hills. Elsewhere however lack of a plentiful supply determined where we lived, our health, mobility with rivers and canals and power when it came to who owned the rights of water.

In some ways we can be thankful that lack of water meant that vast areas of the landscape were not inhabited. On the North Downs in Surrey and Kent, absence of water on the chalk uplands meant that villages and towns were established off the hills. This has left the hills as open spaces where today recreation and wildlife mean that the North Downs National Park proposal becomes a viable consideration, albeit only 20 miles from London.

The Malvern Hills are already protected and are arguable Britain's original National Park. The vast upland provides a ready source of water but it was the Victorians who eventually managed it by channelling it through pipes and water courses. This enabled the communities at the foot of the hills to use it for domestic and water cure purposes.  And so Malvern’s reputation for the water cure was created. 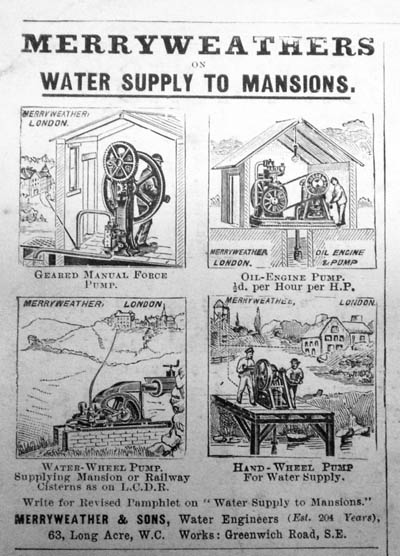 Mobility has always been a crucial aspect of a civilising society. Rivers and canals served this purpose until the invention of the steam and internal combustion engines when fossil fuels superseded horses to haul the loads.

But even if there was water around who owned it? Could you help yourself to the subterranean resources by digging a well? Would the water that you secured then drain the resources that others relied on?  Landowners were in a particularly strong position in this respect.  The extraction of water became a nightmare for many as did the contamination of supplies by others who returned the used water to the environment.

In the picture, Victorian appliances to procure the elixir of life.
In our age it is easy to forget the infrastructure related to water that makes our civilisation viable. At the turn of a tap we have trouble free, quality water. The public main supplies quantity that supersedes our requirements but this was not always the case. When the Irish, as a result of the famine resettled in Whitechapel London in the mid-19th century, water was still a major problem. Overcrowding and the Thames in effect being an open sewer meant that you fought for any drinkable water that was available for a mere 20 minutes a day from the public supply.
Village pumps and wells became the norm often commanding several hours a day to collect water from. The lucky people had their own pumping stations, especially if you were a land owner with your own well or spring. This is what we celebrate in the case of Malvern. A prolific supply of water at the foot of the hills with many public and private sources to provide domestic and industry needs.
For more information on the National Park considerations go to www.britishnationalparks.com on our web site.
New Evidence on the Demise of West Malvern Spa
Built by Mr W H Ryland of Bewdley in 1870, the West Malvern Spa was a substantial cathedral like domed building on three floors in West Malvern. It boasted a decorative fountain and was built following the benefactor's resort to the West Malvern Springs for cure of his tuberculosis. The main hall was constructed in Corinthian style using Bath stone and could seat 2000 people. The building proved more expensive than planned and Ryland was bankrupted as a result. The building was closed shortly afterwards and this thwarted any ambition for the establishment of a water cure centre there. 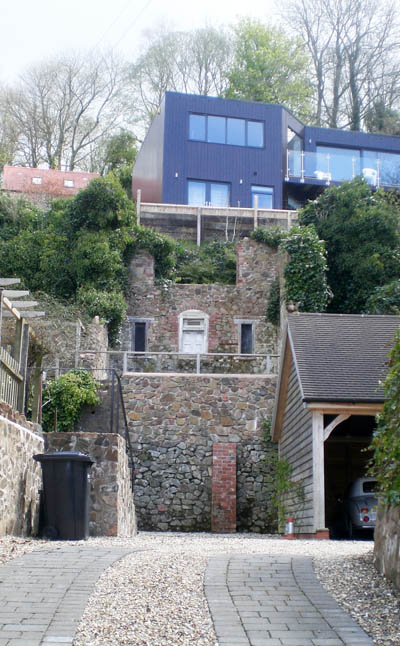 But why was it closed and then demolished so soon? It would appear that the massive building was fundamentally unsound due to structural defects. A new system of setting timber in the brickwork every six feet apparently failed when the timber rotted. The wooden floor beams were rendered unsafe and the cost of repair was far too much to warrant saving the structure. In the 1920s, after local effort failed to render it sound, the complex was demolished. This information was recorded by T A Baylis a local resident and made available by Carol, resident at the West Malvern Spout.
In Newsletters 44 and 52 we discussed the archaeology that had come to light in 2012/3. The fountain location was identified as the recess halfway up what was once the rear wall of the spa hall. The fountain was in marble and was an angel dispensing the elixir of life, Malvern water. The recent picture shows the site in 2016. It is surmounted by a modern building but the terrace that once contained the statue survives. There is no surviving picture of the statue as far as we are aware. Do get in touch if you discover a picture. The past newsletters can be read on our web site.
Mystery of Earl Beauchamp's Fountain 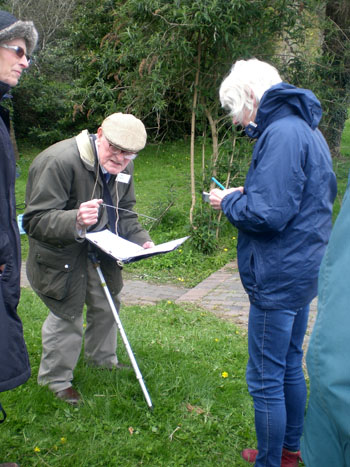 There are two Peter Goldings. One created the first designer jeans in 1970 and sold them in a shop in King's Road, Chelsea. The other is a retired engineer and professional water diviner, Peter Golding, BA, C.Eng, MIET. Peter is a member of the Professional Dowsers Register, vice-chairman of the British Society of Dowser's Water Divining Special Interest Group and is considered one of the world's leading experts in water diving. He has over 30 years' experience dowsing for water in the UK and in the driest parts of the Middle East but he also locates the route of water and sewage pipes.
What luck it was that, quite by chance, Cora and Bruce met him with a party of his student dowsers at the Clock Tower on well-decorating Saturday. Some were using metal rods and others, including Peter, used pendulums. The water at Clock Tower, he affirmed, was 96% pure.  With that in mind we told him about a nearby fountain where the flow was closed off last year because of contamination. Peter asked the name of the fountain: Earl Beauchamp's. He concentrated on his swinging pendulum and told us it was only 42% drinking quality. Why? we asked, and he told us to make suggestions. Someone said animal pollution and he dowsed and said no. Human intervention? Yes. Chemicals? Yes. What sort? Nitrates: 11%.
The suggestion was that someone has either dumped chemicals above Earl Beauchamp's Fountain or chemicals rich in nitrates have been sprayed on the surrounding fields. Does anyone have any observations or comments on all that?
In the picture Cora discusses spring contamination dowsing with Peter Golding.