Springs, Spouts, Fountains and Wells of the River Wandle - 3 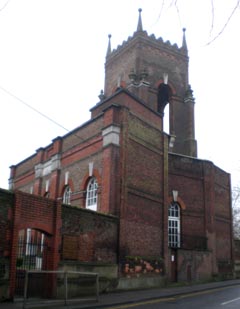 Carshalton in Surrey is the location of a significant 18th century spa or bagnio, which is only now gaining the recognition that it deserves. The Waterhouse, that includes the bagnio has been a well known landmark but the interior yields treasures previously not accessible to the public. The bagnio tower and building was erected between 1716 and 1721 by Sir John Fellowes, in the grounds of his magnificent Carshalton House. It was part of a series of engineering features designed to provide water to the house and pleasure gardens as well as the Delft-style tiled bath house or bagnio in its midst. The building, with its external pinnacles and urns, is unique and a national treasure. The source of water was a spring in the grounds of Carshalton House which fed the River Wandle. Within the Waterhouse building a "water engine" (water wheel) pumped water to the lead tank in the tower using the outfall of the lake. The pumped spring water in turn fed the bagnio as well as the main mansion. From the Waterhouse, the water, having driven the water wheel, goes under the road and into Carshalton Ponds. 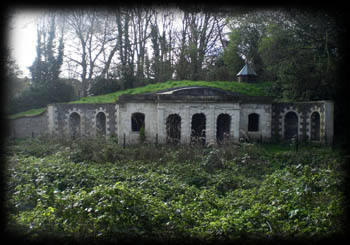 THE FELLOWES GROTTO
The spring in the grounds of Carshalton House supplied water to the extensive lake adjacent to the water tower. The lake is surrounded by a number of other ornamental features including a folly bridge and the Hermitage. The latter is a grotto that was restored in the 1990s by the Carshalton Water Tower Trust. It can be explored on open days. To find out more about the Hermitage Grotto and the Trust click the picture right.
Grotto Day was St James Day, which was observed on August 5 before the Gregorian, or modern Calendar came into use and on July 25 thereafter. In England during the late 18th and early 19th centuries, oysters were not considered the rare delicacy they are today. They were a common food source either salt or fresh water varieties being available. The large number of oysters eaten at that time meant there were many shells around. On St James Day, children used the shells to construct small decorative grottoes, possibly representing the shrine of St. James in Spain. The children begged for pennies as a reward for their efforts. Most of this grotto building took place in South London, and the custom continued right up to the 1950s. St. James the Great was one of the Apostles and brother to St John the Evangelist, and the scallop shell his emblem. For more details see section 5 by clicking on the menu below. 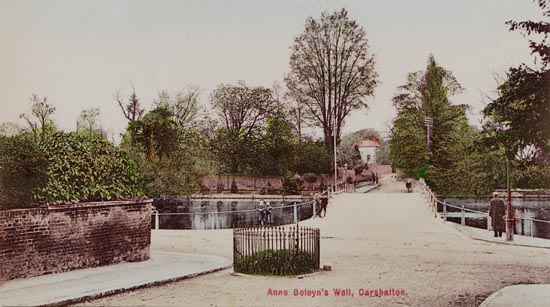 Two pictures of Anne Boleyn's Well, past and present. 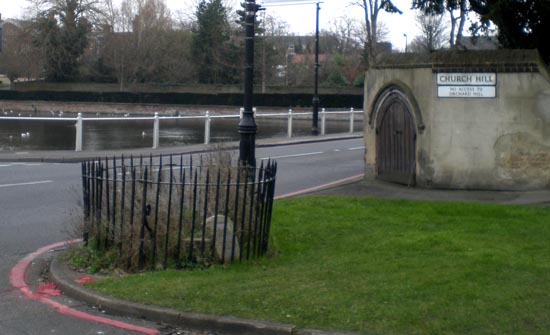 Many springs erupt in and around Carshalton, feeding the tributary of the River Wandle. This one by Carshalton Ponds is reputedly the Ann Boleyn's Well after a hoof of her horse caused spring water to erupt when passing though the village. The water is believed to originate from the Hogpit Pond in Carshalton Park. Inspection of early maps indicates that the location of the well has shifted slightly over time, varying from either side of the road to the middle. Behind the doors is an arched chamber thought to have been an access point to the source water, now dry.The proximity to the graveyard must have done little for the water quality. It has also been suggested that the recess may once have been part of a hostel for pilgrims or perhaps itinerant wanderers. 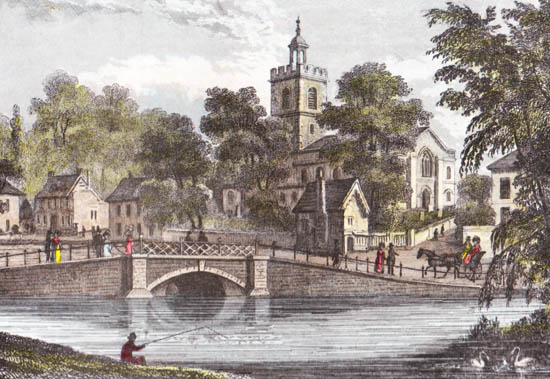 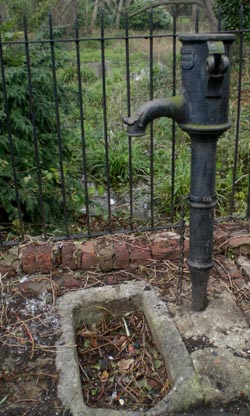 Later the recess was used to store the fire cart but before that a cottage stood on this corner. The water source here may therefore have been the original supply for the cottage, later utilised to fill the fire tender. The cottage is illustrated above.

At the top end of West Street, the pump and the spring that can be seen through the railings is variously known as Saint or Lady Margaret's Well and Pool. The water garden behind was enhanced and endowed by John Ruskin in 1876. Ruskin was a great lover of Carshalton with its water features and bemoaned the changes that had taken place between 1850 and 1870. A nearby stone tablet testifies to the provenance of the feature. It was estimated that the total input of spring water to the Upper Town Pond including Lady Margaret's spring, exceeded 7 million gallons a day. 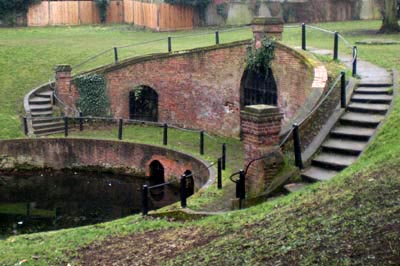 THE SCAWEN GROTTO
This is the highest of all the Carshalton springs. The grotto in Carshalton Park dates from the 18th century when it was built over springs which flowed into the River Wandle. The substantial central chamber had a large marble sea shell basin and the facia was decorated with a variety of materials including flint, glass, shells and coral to represent a sea cave. There was even a statue of Neptune on top of the central facade. Once this spring yielded three and a half million gallons of water a day. The springs rarely flow now and the finer decoration has gone. The structure dates from 1724 when it was built by Thomas Scawen, who inherited the 130 acre Carshalton Park from his uncle Sir Thomas Scawen. The grotto may well have been part of a battle of one-up-man-ship between the Scawens and the Fellowes who owned Carshalton House, where a grotto was built alongside the lake. 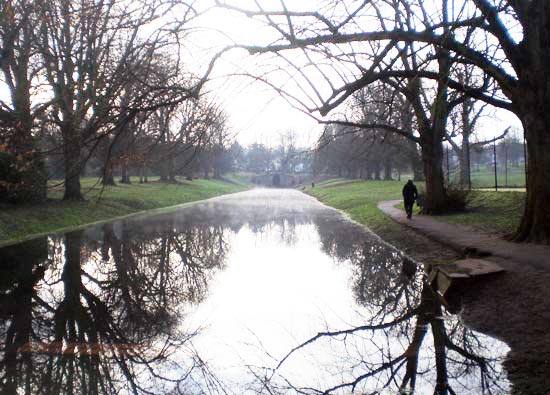 The grotto spring supplied the ornamental Westcroft Canal that flowed northwards. This in turn powered the former Grove Mill on the other side of Carshalton High Street before flowing into the Wandle nearby. The route of the canal can easily be traced and is usually dry due to a lowering of the water table since the mid 19th century, causing the out-flow at the spring to substantially drop. This was brought about by excessive pumping of the water table for public water supplies, particularly in the Croydon area. As a result the Westcroft Canal is generally seen as a waterless linear landscape feature. Freak heavy rainfall during January 2014 however caused an excess of surface and ground water availability and for a short period the canal could be seen as was originally envisaged, as shown in the above picture. The grotto can be seen in the distance at the head of the watercourse. 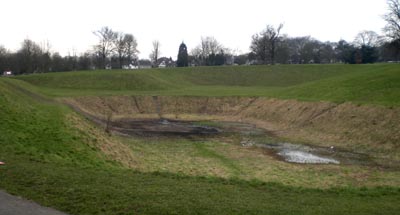 Hogpit Pond - The second feature in Carshalton Park of note is the vast depression that now acts as an arena. The name Hoggpytte can be found in 15th century medieval records and suggests the site has been an important water feature from early times. The mill-pond configuration was constructed about 1770 after the Scawen fortunes dissipated. It was used as a reservoir to power mills in Mill Lane and fed by a spring. 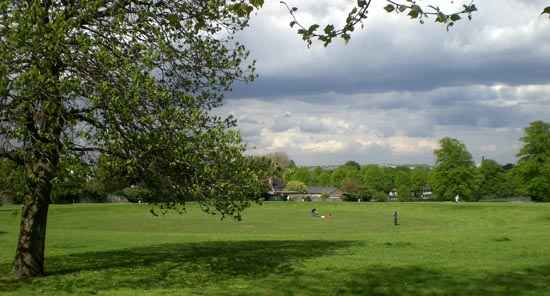 Just to the west of the Hogpit Pond in the park there is a third feature known as the Frying Pan. This is believed to have been an elevated feeder reservoir, probably using water from the Hogpit spring.  This is now dry and can be seen in the picture above with a family playing in the depression.
Since extensive water pumping from the water table commenced from the mid nineteenth century onwards the springs have 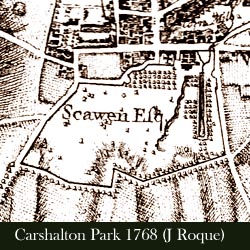 run dry and subsequent landscaping has altered the area further. The spring drained down to Carshalton Ponds and may well have been integral with the waters of Anne Boleyn's Well because in the 1860s it was estimated that the combined output was about 2 million gallons a day. Pre World War II maps show a water course leading north from the Hogpit Pond in the direction of Carshalton Ponds. Earlier maps such as Roques of 1768 show two distinct springs and watercourses, one from the Grotto and a second starting slightly further south of the Hogpit Pond site and flowing through what later become the pond. After World War II the Hogpit Pond was refilled and sand on the nearby terraces provided a play area for families. Today there is no sign of intended surface water.
In a document dated July 1979 'Your Water Supply' the Sutton District Water Co. throw an interesting light on the waters that flow through the Carshalton Ponds. When new boreholes were developed at The Oaks in Carshalton, concern was felt over the effect this would have on the water table and the supply of water to the Carshalton ponds. As a result the company constructed a small pumping station at Goat Road Mitcham to take water from the River Wandle and pump it back to Carshalton. The work was completed in 1970 and a million gallons a day supplemented the dwindling water sources at Carshalton.

The 1900 drinking fountain illustrated is located at The Wrythe, Carshalton, by the entrance to the recreation ground. Wrythe is thought to derive from the Anglo Saxon word for a small stream (a rithe). A spring rose on the site of the BP garage opposite. Also there were two ponds on the green in the mid 18th century. The ponds are long gone, the spring is now underground and the stream culverted, flowing into the Wandle at Hackbridge. Within living memory, former school children recall drinking at the fountain on the way home from school. The construction of the drinking fountain was contemporary with the opening of the recreation ground and the date commemorates this event. There was originally a horse trough and gas lamp adjacent to the fountain.
The mystery that remains is who was the benefactor of the 1900 fountain? Clues as to its provenance can be found in the minutes of Carshalton Urban District Council in Sutton Library archives. On the 8 Sept. 1897 the Council approved a loan of one thousand pounds from the Ecclesiastical Commission at three and one eighth percent interest for a public pleasure ground. Things slowly progressed and the following year on 1 June a caretaker, Mr Keattch was appointed at a salary of twenty five shillings a week. By December 1899 the Council was ready to approve the printing of the by-laws pertaining to the grounds, no doubt in preparedness for the formal opening in 1900.
On the 4 April 1900 however the Council considered a proposal "from the Metropolitan Drinking Fountains Association offering by desire of an anonymous donor a gift for the Recreation Ground of a handsome drinking fountain and trough in accordance with designs submitted on the condition that council maintain same in the future and supply water thereto."
furthermore:
"Also asking that an early reply may be made so that the benefits may accrue during the coming summer."
In the minutes it was recorded that the offer be accepted and that the Council undertook to maintain the structures in the future and supply them with water. The offer was carried unanimously. Two weeks later, on the 18 April 1900, the Council recorded the response from the Metropolitan Drinking Fountains Association indicating that the fountain and trough for the Recreation Ground will be "urged forward".
At the end of October 1900 the fountain and cattle trough at Wrythe were complete and the Clerk was to ask the Water Company to supply water free of cost. As a result of the research by Alan Underwood we now believe that the anonymous donor of a sum of three hundred pounds for the project was a Mrs Wallace of Sutton Road, Carshalton. 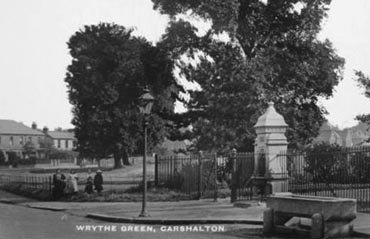 There were also other participants however. Samuel Gurney, who founded the Metropolitan Drinking Fountains Association was a local man who died in 1882. It is believed the Wrythe Green project was partially the gift of the Gassiot family. J. P. Gassiot bought the nearby Culvers Estate and subsequently lived there as a County Magistrate. (For more details see the sections on Croydon and Wilderness Island including the Culvers Estate information in the Wilderness section on the menu below).
The fountain is listed by Sutton Planning Dept. for future possible protection within the Conservation Area but has yet to be approved. We would welcome more information. If you have any ideas drop an email to info@thespas.co.uk

Click the titles to go to the details of the Springs, Spouts and Fountains associated with the River Wandle in that locality.