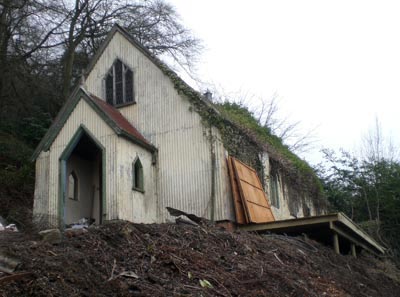 Friends are the gurus of Malvern's water heritage (Malvern Gazette 1 March 2013 p.14). We are an independent voluntary group who relentlessly promote research, conservation and celebration of the Springs, Spouts, Fountains and Holy Wells of the Malvern Hills and of Great Malvern as a Spa Town.
Holywell Chapel Restored.
One of the facilities for water cure patients and the local school pupils in the late 19th century in Holywell Road at Wells House, Malvern Wells, was the chapel on the hill. Located near the Cottage in the Wood spring, this was the type of building that was being used extensively by religious groups to bring people together for worship in towns and villages throughout England. The invention of corrugated iron sheeting in England 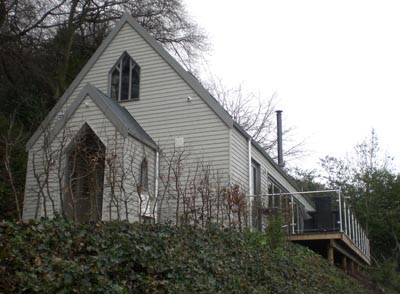 enabled these buildings to be sold in "flat pack" from a catalogue. Always seen as temporary buildings, many have disappeared over the years but they are now treasures of architectural interest. They were known as tin tabernacles and one survived in the undergrowth, near the recently restored Wells House. Knowing it was likely to be restored we photographed it early in 2013 and again recently. It is now a very smart residence with amazing views over the River Severn flood plain eastwards. The retention of original features has given the chapel a distinctive character that retains the link with its origins. Even the old hymn board can be seen in the porch. What a pleasure to see the past restored to a modern use, rather than dismissed and destroyed as an inconvenience.
In the pictures: Before and after in 2013.
Go to: www.Malvernspringsandwells.com  and click on number 74 "Cottage in the Wood Spout" to see a picture of the interior of this chapel as it once was. 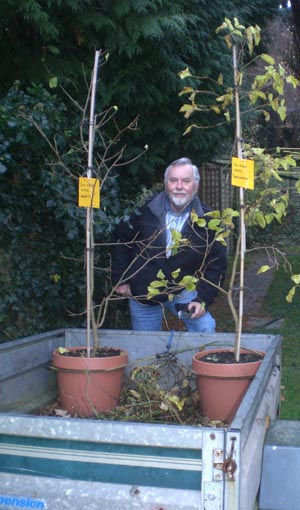 Bernadette joins Bernard for their last long journey.
In the picture left, after years of careful nurturing by Rachel, Mulberry Trees Bernard and Bernadette await their last long journey. From a secret location in Surrey the two trees are ready to travel to Malvern for eventual deployment as replacements for the George Bernard Shaw tree blown down in the gale of winter 2000. Bruce is checking the travel documentation, ensuring the trees are labelled correctly. This project would not have been possible without the assistance of Coca-Cola and has taken more than four years to bring to this stage. Transport has been laid on by Steve Farrar of Tenbury Wells and is a far cry from the massive journey that the original cuttings undertook from Malvern, Australia. It is there that a 1959 cutting of Shaw's original tree in Priory Park, Malvern, England survives and this tree has been used to propagate the prized saplings.
Update: the two trees arrived in Malvern safely on the 29th November 2013.
For more details of this project go to:
www.malvernwaters.co.uk and do a Key Word Search for Mulberry. 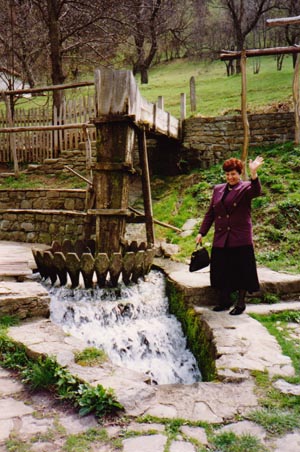 We learn that we can now expect many more visitors from countries like Bulgaria, as the borders come down in Europe. These charming people have an interesting culture that will be more accessible to us as a result.
During a visit some years ago, Bruce discovered this amazing historic water feature. It comprised a stream from a spring that fed down the wooden chute and produced this unusual fountain, The question arises, what was it for? Was it some form of washing facility or perhaps to filter out debris from the stream? We have nothing like it in the Malvern Hills but perhaps we should have. This water feature was discovered in the countryside near Elena in central Bulgaria with the help of Friend Maria (see picture). Let us have your comments and ideas as to what it is.
Island well-dressing update.
We have heard from the Friends in the Isle of Wight again about their well-dressing at Whitwell. The tradition is somewhat 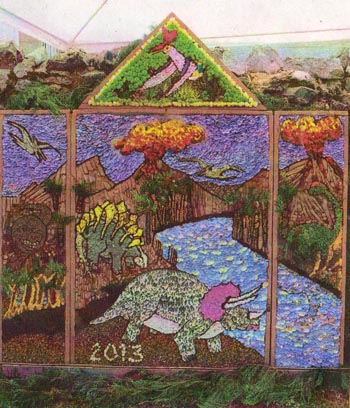 younger than the Malvern well decorating and dates from 2002. The latest theme 'The Year of the Dinosaur' mirrored the 2013 theme for the Island overall and proved to be one of the best decorations done to date by the volunteers. The celebrations included a service at the local church followed by a blessing at the well. The Derbyshire style decoration is shown in the picture from the Isle of Wight County Press.
Did Malvern have a grotto as well?
The idea of grottoes as a heavenly cave dates back to ancient Greek and Roman times. In Britain, grottoes became a fashionable feature to have on the estates of the wealthy from the late 17th century. This Renaissance inspiration originated from Italy and during the 18th century the landed gentry competed to create the most imaginative and impressive. These cave-like structures had several necessary requirements. Grottos were a place of mystery and awe where the visitor could indulge in mythological fantasies. Essentials included a 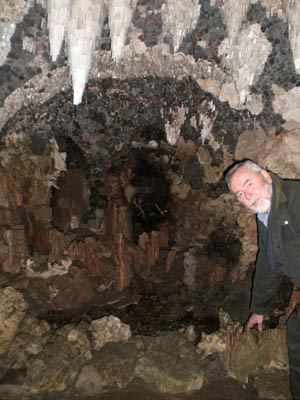 sacred spring or well and portrayals of gods and creatures that inspired the imagination. Today grottoes are being extensively restored and one well worth visiting is Painshill, at Cobham in Surrey. Built in 1760-70, it adjoined two islands in the extensive man-made lake, alongside which flows the River Mole. By the 1970s the crystal grotto was derelict and the roof had collapsed.
A Trust was formed in 1981 to restore the park and the grotto was completed in 2013 together with the restoration of many other landscape features at Painshill. The mystic spring was of particular interest and this has a water cascade flowing to a series of pools in the main chamber. The lower walls of the grotto are lined with dark clinker stone and the roof and stalactites created from gypsum, calcite, quartz and fluorite. This results in an amazing underground experience for visitors exploring the cave like passages where peep holes reveal spectacular views across the lake.  Outside natural oolitic limestone creates the impression of a rocky outcrop concealing its hidden secret. 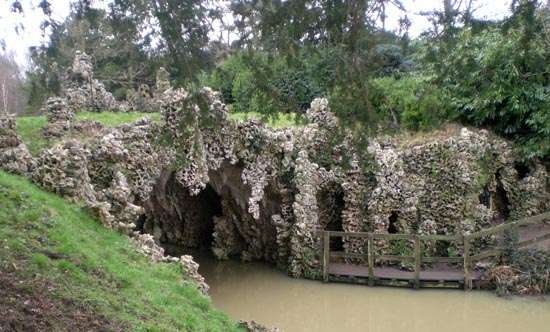 In Malvern we have seen charming underground water features destroyed in recent years, the latest being the vandalism of the Gothic Well detailed in our earlier newsletters. Here the well chamber had  been converted into a Second World War air raid shelter before being totally walled up last year. How much better it could have been, if, with a little imagination, it could have been metamorphosed into a grotto. This could have captured the mystery of an ancient well site and provided a feature which would mystify and amuse visitors. It also raises the question, was the Gothic Well originally designed as an Ancient Grotto? It is well established that Gothic revival styling was used in grotto design in the early 19th century. As such it would have been Malvern's unique contribution to a long tradition of grottos elsewhere. 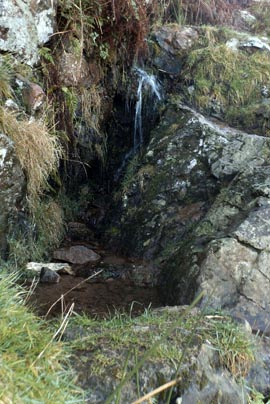 Instead it was converted to an air-raid shelter and eventually destroyed by the owner.
Read the recent history of the site in our earlier Newsletters on-line and let us have your views.
In the pictures: i. Bruce checks out the sacred spring in the main chamber at Painshill, albeit without the spring cascade running on the day of the visit; ii the grotto entrance for both foot visitors or by boat.
Drooping Well or Dripping Well?
A Friend alerted us recently to the felling of some oak trees adjacent to the Dripping Well, high up on the hills, which is a favourite spot of hers. She was rather sad because, to her, the trees were so much a part of the beauty of the spring. On a beautiful, sunny, spring-like Sunday in January we trekked up there to take a look. Counting the rings, we found that the trees were between seven and 20 years old and very close to the spring, which was gushing after all the recent rain. It is likely that, were the trees to grow unfettered, they would eventually undermine the spring and send it off course, or divert it 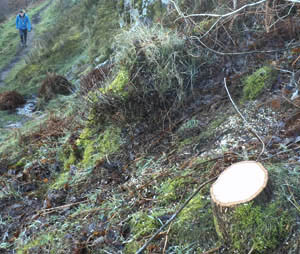 completely underground. There are more similar trees on the hills, but there is only one Dripping Well. There will be those who say, "Save the trees from felling," and others who say, "Save the Dripping Well from drooping."
In the pictures: one showing the Dripping Well gushing; one showing the stump of a 20-year-old oak tree
Myrtles Spring (Site Number 100)
On our annual winter tour and inspection of the springs and wells we discovered that the Myrtles Spring in Como Road has been completely fenced off from the public. 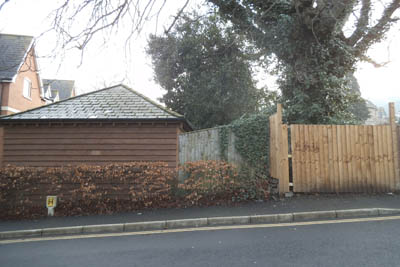 Once you could approach the end of the garden that it lies in up a short drive. Now you are confronted with fencing and buildings.
Have a look at our on-line database or see Celebrated Springs of the Malvern Hills, it's on page 127 to see how it once looked.
Legendary Donkeys on the Hills
The following card was sent by a Friend. Having not seen it before, we thought it worth including in the newsletter. Can you think of an alternative caption? If so email it to us for the next newsletter. 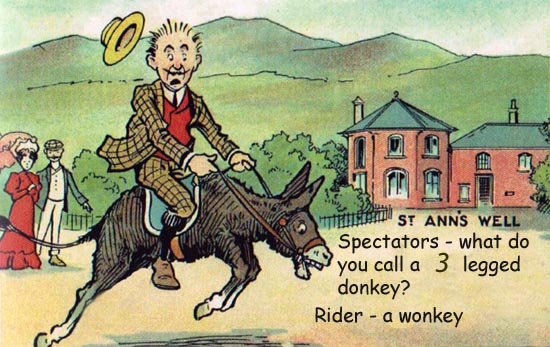