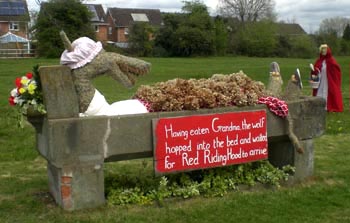 Friends are the guardians of Malvern's water heritage (Malvern Gazette 1 March 2013 p.14). We are an independent voluntary group who relentlessly promote research, conservation and celebration of the Springs, Spouts, Fountains and Holy Wells of the Malvern Hills and of Great Malvern as a Spa Town.
Well Decorating Founder's Award 2013 and Little Red Riding Hood goes missing.
The theme for the 2013 Malvern Well Decorating was "Once upon a Time". Red Riding Hood was part of Team Trough's bewitching nursery rhyme interpretation at Barnard's Green Fountain for this May event. It caught the eye and imagination of event judge Cora Weaver, who founded modern well-decorating in Malvern in 1993. This year, on behalf of Friends of Malvern Springs and Wells, Cora presented the Founder's Award for Well Decorating to Team Trough. The award is a handsome, solid brass plaque depicting St Werstan, patron saint of Malvern's Springs and Wells, kneeling on the Malvern hills beside a fountain. It was purpose made at a foundry in Telford. The Founder's Award scheme is run by the Friends of Malvern Springs and Wells and is sponsored by Coca-Cola Enterprises.
Picture above - There was new twist to the traditional tale after this picture of Team Trough's winning entry was taken - Little Red Riding Hood was thought to have been kidnapped some time between Monday night, 6th May, and 5am the following morning, when she was seen on the Morrison's roundabout at Malvern Link. She was also sighted in Great Malvern, so perhaps she wandered off alone on a shopping expedition for her grandmother. See the next page for the presentation picture.
Little Red Riding Hood wasn't eaten by the wolf, but her disappearance is an unusual end to the story. Wanted posters, and an email that was circulated to some local primary schools, have failed to find the missing red-cloaked maiden. If you have any information, please email  cora@malvernspa.com 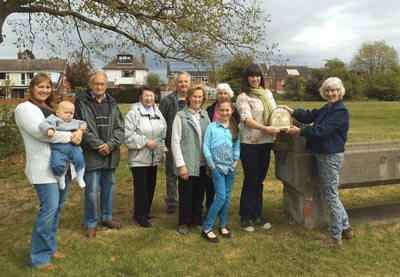 In the picture, Cora Weaver presents the 2013 St Werstan Founders Award to Team Trough at the Barnards Green Fountain.
From left to right: Della Cole with baby Isaac, Ted Higham, Molly Waldron, Richard Bosley, Joan Young, Jackie Higham, Jasmine Cole, Stephanie Underwood-Webb, Cora Weaver.
Mulberry Tree Project
The project to plant a replacement Mulberry Tree in Priory Park using a cutting from the Australian tree that was in turn a cutting from Shaw's original Malvern tree took a leap forward in April. Cora and Bruce had the opportunity of visiting Melbourne and viewing the Australian tree first hand as well as meeting up with Di Foster and husband Ross who are masterminding the project in Australia. The cuttings taken from the Australian tree are now growing well in England and it is hoped to use one to reinstate the Mulberry in Priory Park in the foreseeable future. The plaque alongside the tree in Malvern Australia, records its planting in 1960 using a cutting from the Malvern, England tree. 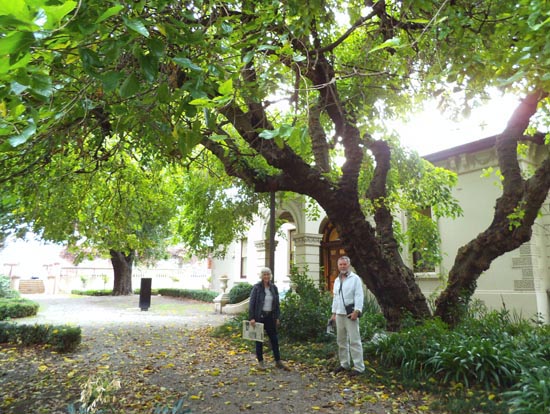 It was also an opportunity to find out more about Malvern which is a suburb of Melbourne. The area had been grazed by sheep and cattle since 400 head of cattle were overlanded in 1835. When the first immigrants came to Malvern in the 1850s they camped in tents around a copious spring, which was on the slope of Malvern Hill. Thereafter early residents of Malvern obtained their water supplies from the valuable spring. In 1865 residents sought a pipeline from the spring to a reservoir to bring the water to the expanding township. The scheme did not go ahead but wells were dug to supplement local growing needs. 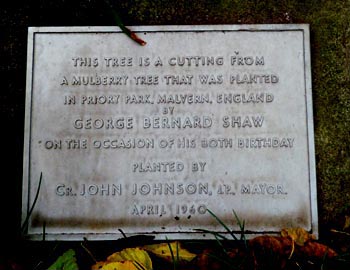 The area around the spring was soon after designated a water reserve and eventually became Malvern's first public park. Today this is but a short distance from the Mulberry Tree.
In the first picture: Cora and Bruce by the Australian Mulberry Tree. The plaque right can be seen behind Bruce recording the planting of the tree in 1960.
For more details on the project go to www.malvernwaters.com and key word search Mulberry.

Another one bites the dust - former public well lost - Gothic Well.
This once distinctive water feature lies along the Wells Road between Malvern and Malvern Wells. We were disappointed to discover that the unique Gothic Well road access has been completely walled up in recent weeks. The style of the entrance on the main road was neo-gothic and was part of a much larger Victorian development, which included the substantial houses above and to the right in Hanley Terrace. The Gothic Well provided a domestic water supply and one can imagine servants collecting water from the underground chamber and carrying it back to the sculleries and kitchens using the nearby archway and steps. For the occupants of the house directly above the well there was a shaft down from the garden above, which avoided the necessity of using the pavement entrance. During the Second World War the chamber was used as an air raid shelter.
Now only the outline of the arch is visible in the wall. To see what it once looked like see our book Celebrated Springs or go to www.malvernspringsandwells.com and click on number 76. It demonstrates that greater awareness and vigilance is still necessary in order to protect Malvern's water heritage.
At the recent St Werstan Award ceremony at Bottling Works Spring the proceedings were accompanied by Carleton Tarr on the Malvern Museum Dulcetone 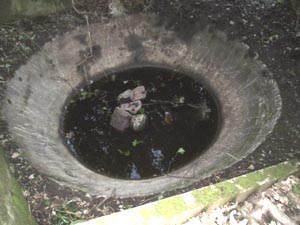 (see Newsletter No.51). As a gesture of thanks for providing this we have made a donation of one hundred pounds towards the Museum Restoration Fund.

Mystery water feature at Earnslaw Quarry.
The picture right is of cement/concrete bowl - possibly 15 feet diameter across the top. It's downhill a little way from Earnslaw Quarry. What do you make of it?
Amazing Archaeology at the West Malvern Spa site. 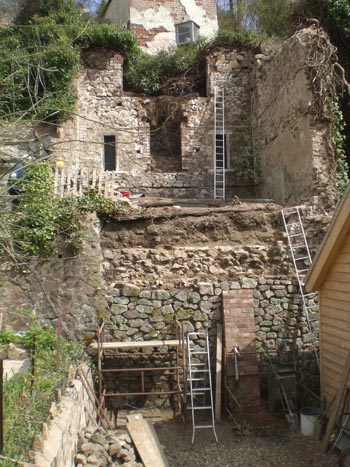 In the 19th century "The central attraction is the statue fountain, in a recess on the east side. It is approached by stone steps, is screened off by ornamental woodwork, and is fixed in the midst of an effective grouping of rockery, virgin cork etc., while just above is a pretty fairy cataract adown which water can be made to tumble at will independently of the drinking stream. The statue is in composite marble; it represents an angel dispensing the elixir vitae from a water lily in the left hand."
In Newsletter 44 we reported on the discovery of the original fountain plinth that once adorned the main assembly room of the West Malvern Spa. For many years it was believed that the building was completely demolished and nothing survived. Diligent searching by the owners however has revealed treasures beyond belief after we identified the statue plinth halfway up the cliff at the rear of the original site. In the picture you can see that the entire recess where the statue once stood has been excavated and all sorts of archaeology revealed. The owner plans to make the site a garden feature but at the moment it is very unsafe as we found out recently during a site visit. We will keep you posted as matters progress. In the meantime to read the background on-line go to www.malvernsprings.com and click on Newsletter 44.
We have never been able to locate a picture of the original statue - any ideas where one might be found? 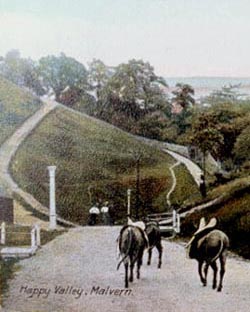 Last Newsletter - Mysterious Iron Posts are everywhere.
In the last newsletter we featured a mysterious iron post that we sought information about. The response was enthusiastic to say the least.
A Friends wrote "I did manage to find it (just) on google streetview, hidden in the trees!  Not knowing the lie of the land I would never the less suggest it may be a sewer vent pipe, this would explain it having survived the relentless 'tidying up' that is so prevalent these days."
Another Friend said: "There are also some Mysterious Iron Posts up by the Wyche cutting. I walked past two of them just last week. If you come up to the Wyche Cutting from the Malvern side and, instead of swinging round to the right to go through the cutting, go straight on 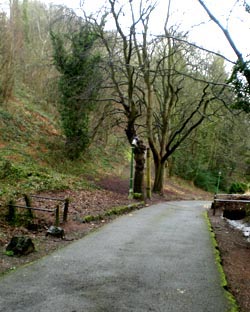 along the grassy track you will see both of them on the right hand side of the track about 50 yards apart. I think there is also one just north of the Wyche cutting - probably about 200 yards away and slightly to the east of the ridge."
And then we received a vintage picture of an iron pole in Happy Valley (left)! The pole is visible on the left and the pole beyond the two figures is a gas lamppost. We went and had a look and found the pole still there, next to a new lamp post with a wonky top. The pole is similar but not the same as the one in Newsletter 51. The modern day picture right is of the same view but now with extensive tree cover and no donkeys. Our best guess is that it is a vent for the Green Valley spring water to prevent the drainage pipe siphoning. Any ideas do let us know.