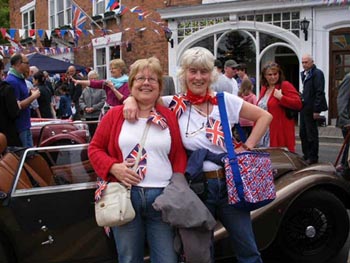 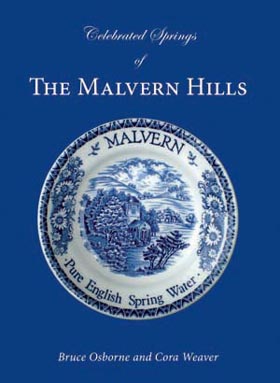 Gateway to the Springs and Wells -
Friends of Malvern Springs and Wells celebrate Jubilee Weekend outside the Mount Pleasant Hotel. The Hotel will soon be the venue for another celebrated event with the new book launch detailed below.

Celebrated Springs of the Malvern Hills.
Would you like to know where Dr Gully's Neubie House really was? Do you know where the Dumpling Fountain was - and did it look anything like a dumpling? And where is Darke's Tank, which provided such an important water supply to mid-nineteenth century Malvern? And who was Darke?
The answers to these questions, and much more new information about Malvern's history, can be found in the pages of this beautifully illustrated book, Celebrated Springs of the Malvern Hills. Printed by Phillimore in large quarto, it contains 192 pages, 8 clear maps showing the location of 130 watery sites, and approximately 200 colour plates and black and white images, most of which have never been published. The book also includes a history of bottling Malvern Waters.

The book, the largest and probably the most elegant ever to have been written about Malvern, is £25.00, but, as a Friend of Malvern Springs and Wells, you can take advantage of our special offer. You are invited to come to the book's launch at the Gateway to the Springs & Wells - Mount Pleasant Hotel on Belle Vue Terrace - on Saturday 11th August between 10am and 1pm. Sit with a coffee (provided by the management) and look at a rolling on-screen presentation of images from the book, then buy your book at the special discounted price of just £20, using the voucher printed on the last page of this newsletter.

"We believe this is a much better proposition than trying to re-establish a tea hut on the summit of the hills or a series of ad hoc services scattered over a wide area," said Bruce, "The Gateway will be the visitor centre for what is really Britain's original National Park".

We were recently invited to explore some archaeology at the Royal Malvern Spa at West Malvern. In particular, high on the cliff at the rear of the now demolished spa site, is the remains of a double curved step and evidence of a water supply. Researching contemporary scripts that described the spa in the 19th century, we have been able to identify this as the remains of the original plinth that held the central statue fountain. Investigation of early images, particularly the depiction on a celebration medallion, suggests that the main hall was at first floor level. This enabled us to clarify in our minds why the remains were poised nearly 20 feet above the present ground level. In addition numerous decorative stone ornamentations were found in the vicinity, which also appear to be artefacts from the original building.

The Royal Malvern Spa Hall and Pleasure Gardens were officially opened on 7 May 1883. The following contemporary texts describe what we have discovered:

'...the central attraction is the statue fountain, in a recess on the east side. It is approached by stone steps, is screened off by ornamental woodwork, and is fixed in the midst of an effective grouping of rockery, virgin cork etc., while just above is a pretty fairy cataract adown which water can be made to tumble at will independently of the drinking stream. The statue is in composite marble, designed by Messrs.Rogerson (Liverpool) and modelled by an Italian artist; it represents an angel dispensing the elixir vitae from a water lily in the left hand, while on the right arm rests a scroll thus inscribed - 'God's water. Drink and thirst not. Pure water is life.'...the water from this spring is proved to be very remedial in gout, rheumatism, liver and renal complaints, and general debility.' Either side of the main fountain stood two Indian Gods, said to be over 2000 years old. Outside there was a further fountain in a rustic grotto.

In the pictures: Cora climbs the precarious cliff that was once the back eastern wall of the spa building, to find the peculiar rounded plinth upon which once stood the angel dispensing the healing waters.

Having unearthed a significant piece of Malvern's past we have to consider what is best done to preserve these artefacts. This is a question that remains unanswered at the moment.

Springs and Wells elsewhere - Poxwell - Dorset  - Just 6 miles from in is a village called Poxwell. As one might expect with a name like that it has a very elaborate fountain alongside the main road. Driving past recently, one can not help wondering what the water was used for! The name originates from the 'Pokes well' and dates from when the locality was occupied by the Romans in the 1st century. The Keep Military Museum of Devon and Dorset, situated just 5.5 miles away from Poxwell, gives visitors an excuse to pass by and have a look at the well. You will note that the roadside facility was fed by a conduit, erected by John T Trenchard. Esq for the use of the Poor of his parish Poxwell 1843. The Manor House was built in 1613 to Jacobean style, and remained in the hands of the Trenchard family from 1699 until the 1970s. Cairn Circle stands on the edge of the village, a small stone circle about 14 feet in diameter. Sometimes dubbed the "mini , stop by one summer day and explore.