Malvern has joined the ranks of venues worldwide that are being recognised for their unique contribution to international spa tourism. The Spagazer SPA scheme identifies venues that have a magical spa related quality that makes them amazing and splendiferous, whether it is attributes that are heritage or modern. Malvern Springs and Wells are unique and their background, dating back to the 11th century makes them especially interesting.  This award now recognises that Malvern is in the same ranking as such places as and Rotorua. To find out more go to our web site at www.malvernwaters.com .

Pump Restoration for Friends in 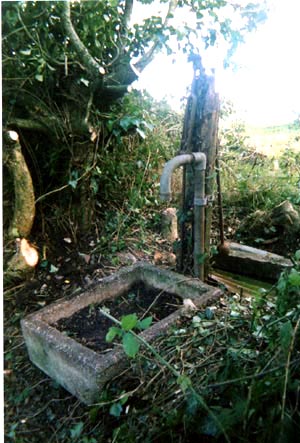 We have been asked to get involved and advise on restoration of a celebrated well site in . It is located in the , near Honiton, where they have a well and village pump in a sorry condition. The well is about 12 metres deep and has a further 12 metres of water in it. It was restored in the 1950s but the pumping mechanism is now dilapidated although the well itself is in fine condition.  We have salvaged what there is of the mechanism and now plan a rebuild using some vintage ironwork provided by a local farmer. It would be sensible to put a well house over the site and this is also being investigated. In due course we will report on progress and what may well be the start of a sister organisation covering the celebrated Devon Wells, of which there are many. Plan your next holiday to Devon therefore with a view to discovering springs and wells in and around the Blackdown Hills.

Our Friend who keeps and eye on the Dripping Well has filed his occasional report as follows.
'At last, I have been up to inspect 'my' spring. It is no surprise to say that the Dripping Well is dripping quite nicely. Quite a good trickle in fact. All around it is the lush vegetation I cannot identify, but including some lovely little ferns, and a few clumps of little yellow flowers, which I imagine are tormentil. All around the surroundings of the spring is a good crop of bilberries, and there are plenty of purple poos on the paths to show how much the birds have been tucking into them. There is also a fab crop of rowan berries, looking very bright and shiny - but no red poos!! On the way up towards Dripping, I passed the illustriously named Weavers Well and as usual it is overflowing and running along the gutter and into the drain.
All best wishes, see you soon
.'
We always welcome observations on the various Malvern Springs, especially the harder to find ones that are well off the beaten track.
Elan Aqueduct
For anyone interested in water heritage in the , we are well advanced with research on the Elan Aqueduct. This masterpiece of engineering conveys water from to via 73 miles of tunnels, pipes and canals. Do let us know if you would like to get involved or can add to our store of information.

St Werstan's Award for the Enhancement of Water Heritage 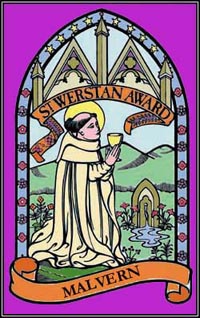 and wells and their immediate environment. This is in conjunction with Malvern Natural Mineral Water. Penny Cottage was the first nomination and we thank all the Friends who took the trouble to return the completed evaluation forms. It is important that the awards reflect grass roots views and this is Friends opportunity to express their views.

The results of the poll was the following indexed scores by category and overall: 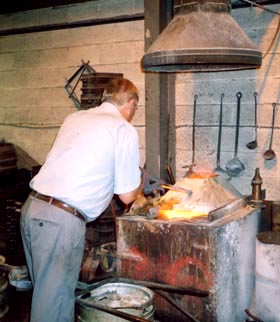 This compares favourably with the mean of 60 arrived at by a theoretical sampling of a number of sites and so arrangements will be made to present Penny Cottage with the award shortly. The award will include a magnificent, polished plaque in hand cast brass that can be displayed either inside or outside at Penny Cottage. Val and Chris Rizzotto are making these and the pictures show Val and Chris in their foundry with Cora getting in the way!  Each plaque will be engraved with the site details. A second trophy is also being prepared in the form of a stained glass window and this will be optional for sites receiving the award, depending on the site circumstances. These trophies will be a permanent recognition of the outstanding endeavour that has led to the award.
We have received two further nominations for awards. These are for a site on the western side of the hills and a brand new site being developed. The nominations will be considered after the Penny Cottage Award has been completed. If Friends have any specific sites that they consider justify Awards under the scheme do let us know. Details of the St Werstan Award scheme can be seen on our web site at www.malvernspa.com. 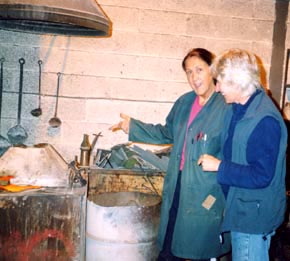 Click on the window to see details of the background to the Awards and St Werstan. Have a look at Newsletter 10 if you require notes for guidance or contact Cora or Bruce. Back numbers of newsletter are available free on request. Please send us an SAE.

The history of St Werstan, who inspired the foundation of Malvern Priory and thus the development of the town, is now being researched by a group of scholars with expertise in this specialised field of medieval history. A paper is being prepared and we anticipate that there will be new revelations about his founding of Malvern and his relationship with what is now known as ’s Well. One hypothesis is that ’s Well was originally named after him, ie St Werstan's Well, with St Ann's Well a later contraction or error. What we can say at this juncture is that St Werstan was a significant influence on the ancient development of the well site and the ultimate establishment of Malvern. This influence continues to this day through the Award scheme. 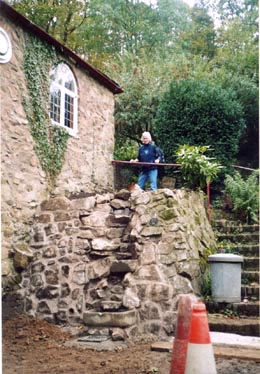 Funding for Springs and Wells Restorations
Finance for site restorations has always been a problem and now at last we see the Heritage Lottery Funding being deployed at ’s Well. It was in October 2000 that we prepared a provisional schedule of possible sites and their related works to benefit from HLF funding. Since then there has been much water under the bridge, or should we say out of the well? This includes the reorganisation of bodies representing the Springs and Wells interests around the hills. Now, 5 years later, work has commenced.  The project is partnered by the County Council with David Armitage, the Local Area of Outstanding Natural Beauty Officer, overseeing the practical work. The picture shows the new water cascade at the entrance to ’s Well. Other work includes landscaping the pond area. The emphasis is on general landscaping and it might be argued that greater emphasis on bringing to light the early heritage of this amazing site would have created a further dimension to the site enhancement. After all it is being funded by "heritage" public money.

About 20 sites are due to benefit ultimately from the HLF funding although even now the list is provisional.

Further good news is that in 2006 additional significant funding may become available for developing our water heritage. Watch this space as they say!

Unfortunately due to a series of circumstances beyond our control we were obliged to postpone the Owls Hole Pump Garden Party in September. We will be reconvening this event in the New Year and will advise the revised dates in due course. We have recently added to our stock of vintage Water Cure films. The eccentric Dr Kellogg, the inventor of Corn Flakes, was the proprietor of a Water Cure establishment at in the . His story is one of outrageous sexual repression, greed, healthful obsession and lust and will also be available for viewing at the reconvened Owls Hole party. And so we will be incorporating the showing of Charlie Chaplin's The Cure as well as one or two other gems in the proceedings.
In the meantime we are grateful to Tim Brazier, one of the Friends, who has kindly put pen to paper regarding the history of the Owls Hole Pump and Engine. Tim was on the Malvern Urban District Council Water Engineer's Staff with only a short break during the war. He was involved in the original recovery of the Owls Hole equipment in 1994/5 and has been the source of considerable knowledge about its use and maintenance. The following is an extract from his paper in which he describes the starting procedure for the diesel engine, which we believe, replaced the original Crossley petrol/paraffin engine sometime in the late 1930s. The picture shows the building that once housed the pump and engine. Owls Hole is a lonesome place in the woods below British Camp and you can visualise the solitary engineer attempting to make sense of the pump and engine in the twilight. Here is how he did it. 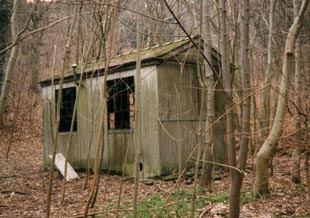 'Check the fuel level and top up if required then unscrew the Wick Plug Holder. Cut 1 inch long of Starter Wick and place in the Holder. Light Starter wick and screw in the lighted wick into the plughole. Press down the Decompression Handle and at the same time turn the starting handle 'like hell'. Once the motor has started release the Decompression Handle and the engine runs as normal with the belt drive running in the free pulley position on the pump, then slide the belt over by means of the 'fork' type slider to the fixed pulley and this sets the pump in motion. Should an airlock in the pump occur this was cleared by opening the valve in an outside chamber for a few moments to vacate the air, then close down again.'

We hope to successfully demonstrate a starting procedure at the Garden Party in 2006.

Newsletter stuff
Next time - we will announce our activity programme for 2006 when a number of events are planned.

If you would like any back numbers of our Newsletters send a large SAE to Bruce with details of which ones you require. There is no charge and they may be collectors items one day!  This may be of particular interest to the new Friends. The reason why we are able to distribute Newsletters to Friends without charge is because of the generosity of the Spas Research Fellowship, which handles our mail.