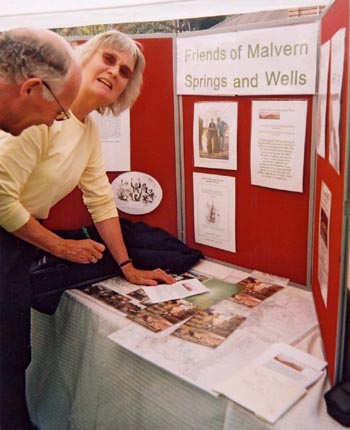 The celebrations in , Malvern on the Saturday of the May Day weekend was an excellent opportunity not only to meet many existing Friends but also for many more to join our ranks. It was all rather overwhelming and our stand was busy all day. Thank you for the many who gave their support. There is no doubt about it, there is a lot of enthusiasm for the Springs and Wells, and Friends provides a focus for this. We are now one of the largest local groups with a membership comparable to the Civic Society. Friends are invited to contribute to our programme, either by suggesting or running events or by contributing to our newsletter. Do let us know if you have something that you feel we should be saying or doing.

Picture - on the stand in

Historic Droitwich in Uproar about their 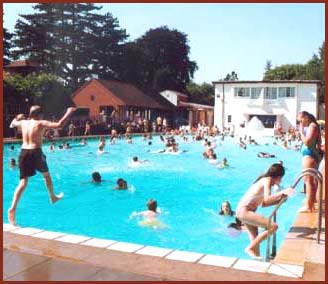 Friends may be interested in the goings on at another spa town in Worcestershire. The following is from a recent news release about a meeting convened to discuss the future of the salt water . The capacity crowd voted unanimously (no votes against and no abstentions) to demand a parish poll in protest of Wychavon District Council's recent vote to demolish Droitwich Spa's unique Art Deco natural salt-water 'sea bathing' lido. A number of parish and district councillors were present and spoke out at the meeting, including Roy Seabourne (Lab), Liberal Democrat parliamentary candidate Margaret Rowley and town mayor Anne Taft (Con). Cllr Pam Davy (Con), whose recent "We Should Have A Pool" letter to the Droitwich Advertiser has caused a storm of controversy. Parishioners arriving late were forced to listen to the proceedings, opened by Cllr Graham Gopsill and chaired by local resident William Moy, via loudspeakers set up outside. "This is true democracy in action," claimed one resident, "Wychavon's vote to demolish the lido was in complete opposition to the wishes of Droitwich and now Droitwich has spoken." The is at present derelict and overgrown with weeds. 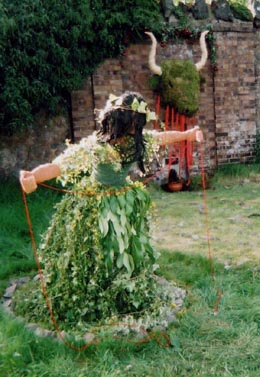 Well decorating in the dates back to the 1870s. This was when the Royal Well roadside spout was inaugurated and decorated in celebration of William H Ryland, former Mayor of Bewdley. He recovered from deaths doorstep as a result of taking the waters here and so he set up the public fountain and the West Malvern Spa. The practice of decorating the well eventually died out for many years but was reinitiated by Cora in 1993 as an annual event. It now enjoys a strong following and this year was no exception. The theme was 'Mythology'. Our personal favourite in 2005 was the Lower Wyche Spout that was imaginatively dressed as 'The Minotaur of the Labyrinth'. Well done Debbie and Jess Sly and congratulations to the many others who also decorated springs and wells so well. We are featuring many of the decorated sites on our website list. Go into www.malvernspa.com and click through to Bob Bilslands famous panoramas on the list of Springs and Wells.
Springs and Wells Legendary Coach Tour

Coinciding with the Well Decorating and May Day celebrations was the regular and now legendary Coach Tour of the Springs and Wells.  This year's tour was oversubscribed, however many Friends were on the trip and it was an excellent opportunity to converse about our Springs and Wells. The 2005 Coach Tour was once more sponsored by Malvern Civic Society and took place on Sunday 1st May, leaving Belle Vue Terrace after lunch. Tour leaders were as usual Cora and Bruce with a lively commentary provided as the party of more than 50 headed off for an anticlockwise tour of the Hills. The tour guides were appropriately dressed in period costume.

The first stop was Railway Station Fountain, quickly followed by Lord Sandys Fountain and then on to Temperance Fountain. This was the first of several opportunities to sample the waters. Cups were provided but one member of the party upstaged everyone by producing a genuine antique Graefenberg Flask. This is an oval drinking glass used by water cure patients over 100 years ago. As the tour proceeded more opportunities to try the waters solicited debate as to which was the best. Meanwhile the guides plied the assembly with historical facts and anecdotes, not only about Springs and Wells, but also about some of the incidents that had occurred on previous tours.

Tours have been operating most years since 1993 when annual well decorating was reintroduced. This year's tour once again meant that many of the decorated springs and wells could be viewed. By 5pm the tour arrived at British Camp for the traditional Ice Cream break having seen and sampled the waters at many sites. The party then headed back to Belle Vue Terrace to draw to a close yet another memorable tour of our water heritage.

For those who were unable to secure a seat on this tour contact Cora to reserve a place next year.

We have been researching a publication along the lines of the Great Malvern Water Trail published just before Christmas last year. This new publication will be based on the and will be an opportunity to discover many more exciting water locations. One of the many attractions is the restored Pump Rooms that date back to when Tenbury Wells was a spa of some repute. It is often forgotten that parts of the outstandingly attractive are within Malvern District and that the physical geography of The Malverns extends as far as Abberley.  More importantly, the publication will detail up to 20 sites that have not been explored in tourism publications over the last 20 years. These are additional to the 110 sites around the and include two old spas. This will be the opportunity for everyone to put on their walking shoes and find out about them. We will keep you posted regarding publication dates, which are planned for summer this year.
OOOOOoooops
In our last newsletter we inadvertently mentioned Civic Society Wardens under Diary Dates. This was an error on our part - sorry for any confusion. It should have just read Civic Society.  As you know, Wardens are now absorbed into Friends of Malvern Springs and Wells and this was done to avoid confusion and to reinforce our belief that there should only be one group as the focus for interest in Malvern Springs and Wells. Friends continue to work with the Civic Society on joint events but are not part of it. 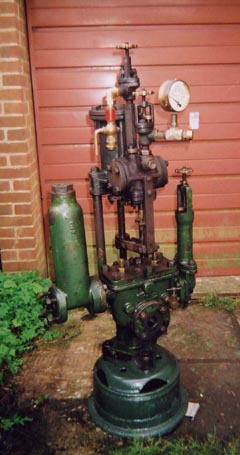 Recent acquisitions - The Steam Pump
In the last newsletter we gave details of the steam pump that has recently come to light. We promised more details and here they are. It is a rather cumbersome steam driven reciprocating pump and we have now had the opportunity of mounting it on a base and cleaning it to see precisely what it is and how it works. This piece of machinery was of the type believed to have been used to pump the Railway Tunnel spring water from the tunnel under the hills to the reservoir above. Here it supplied local houses that had lost their water with the digging of the tunnel. The lower part of the unit is the water pump and the top part is the steam mechanism. The latter drives the former by means of a reciprocating rod and this is all working as far as we can tell. The next stage is to connect it to an airline and see if it really pumps water. To find out more about the Railway Tunnel Spring go to www.malvernspa.comand click on the Warden to go to the site list of springs and wells. Then click on 63. Railway Tunnel Spring. In the meantime if you would like to get involved with this project or have any good ideas as to how this beast can be usefully deployed give Bruce a call on 01737213169.

Our constant pursuit of the rare and interesting has yielded what we think is an amazing acquisition. Malvern Spa was founded on its Springs and Wells and the 19th century water cure regime was world famous. We now have in our possession rare vintage film footage of Charlie Chaplin in 'The (Water) Cure'. Dated 1917 and lasting about 30 minutes, this silent movie promises to be a rare insight into the more humorous and possibly bizarre aspects of the water cure. Mr Chaplin visits a spa taking some alcoholic beverage with him. He has several brushes with other patients and the masseur and the alcohol ends up in the mineral water fountain with disastrous results. 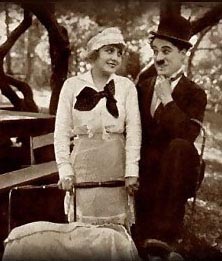 This blast from the past is therefore of interest to anyone studying or amused by the goings on of the vintage water cure patient and practitioners. It looks in excellent condition; we have located a projector and are now in the process of transferring it to DVD. We may have a small number of spare copies on DVD, which we hope to sell to cover the costs incurred. The plans are to show it at the Owls Hole Garden Party on 18th September. Make sure that the date is in your diary therefore if you are a Friend or a Malvern Civic Society member.

Get dressed up and come and laugh your socks off!
18th Sept. 2005 - Party with the Malvern Civic Society. Time to relax with friends of like interest on Sunday 18th September. The Owls Hole Pump and Engine will be working at 4 Hall Green from about 4pm to early evening and you are invited to drop in for a chat and a snack.  More details nearer the time.
Friends stuff
To become a Friend drop us an email with your name and contact details. Friends@malvernspa.com  Friends are an informal interest group. There is no fee and no imposing rules and regulations. If you get this newsletter mailed direct you are already registered as a Friend. If you have lost interest, or are receiving our newsletter unnecessarily please let us know. It saves us wasted postage.

If you would like any back numbers of our Newsletters send a large SAE to Bruce with details of which ones you require. There is no charge and they may be collectors items one day.  This may be of particular interest to the new Friends. The reason why we are able to distribute Newsletters to Friends without charge is because of the generosity of the Spas Research Fellowship, which handles our mail. As our numbers increase we are on the look out for one or more sponsors to assist with our administration costs. If you know of an organisation that would like to be associated with Friends, please let us know. We are happy to promote an advertising message in return. Do have a look at the Spas Research Fellowship web sites by going on to our web site and then exploring the top of page links.