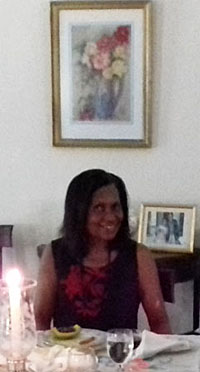 Friends are the recognised guardians of Malvern's water heritage (Malvern Gazette 1 March 2013 p.14).  The Friends is an independent voluntary group which relentlessly promotes research and celebration of Malverns Worldwide and the Springs, Spouts, Fountains and Holy Wells of the Malvern Hills, UK.
A message from June Cheesman, Malvern Plantation House, Barbados

Thanks for sending the links to the Newsletter and for making the corrections to our web page. It would be interesting to know about any Malverns in Africa.  That is such a troubled Continent and needs so much love!  I think it will probably take another thousand years to restore peace and harmony there, but since this is a time of change perhaps there will be persons who can really go into the various parts and do tremendous work to restore peace and harmony.  It is so hurtful to hear of the many persons who are suffering there. I send you and Cora many blessings as you endeavor to bring light and joy into the lives of others.

In the picture left - June at her Malvern Plantation House, Barbados.
A league of great locations called Malvern - Inspiration for the Future.
Historically, the British Empire was seen by the Brits as one of the world's greatest empires. But the Empire struck back and, in the eighteenth century, saw the departure of North America.  Over the next two centuries a further 58 countries gained independence from the British Empire. Some of these countries, although becoming self-governing, retained Britain's monarch as head of state and together form the Commonwealth of Nations.  Although only a shadow of former empire days, the Commonwealth enabled a heritage link to be retained by these historical colonies of Great Britain.
In the meantime, in 1973, Britain became part of another reciprocal partnership when it joined the European Union (EU).  With such things as migration and the expansion of the EU into Eastern Europe, tensions arose and now Britain seeks separation from the constraints and liabilities of the EC. After less than half a century, it has begun a Brexit agenda that will be completed by the end of March 2019.

But will the future role for Britain be as a solitary, relatively small country in a world of great powers?  A new initiative, it is suggested, is perhaps the forerunner of a fresh approach to how Britain may once again command a valuable role in bringing countries together.  Known as Malverns Worldwide, the project originated in Great Malvern, Worcestershire in 2016, where it was founded by the Friends of Malvern Springs and Wells.
Malverns Worldwide aims to link the two dozen Malverns around the world in a league of friendship, sharing and tolerance that respects each Malvern's heritage and way of life. This vision of the future is already well established as representatives from Great Malvern continue to interact with Malverns in other parts of the world. Malverns in the United States and Australia are already participants. In 2017 Malvern Pennsylvania and Malvern, Barbados were added. In 2018, visits are being planned to Malvern in Jamaica and the two Malverns in South Africa: near Durban and Johannesburg. Meanwhile links have been made with New Zealand's Malvern. Is this a prototype of what might be Britain's route forward after Brexit - a league of friendship that is not based on geography, ethnicity, religion, culture, gender, age, ability or status? Your comments and involvement are welcomed.  Become a Malvernologist and participate in this family of Malverns across the globe. Malverns throughout the world are not alone and forgotten. In the picture Di Foster and husband entertain Cora and Bruce when visiting Malvern, Melbourne, Australia on one of the first international contact missions.
For more details of Malvern Worldwide see our web site www.malvernsworldwide.info  The various gifts exchanged as a result are displayed in a special cabinet at the Great Malvern Council Offices UK. From Eyesore to Eye Catcher.
Lamalou les Bains
If you are a traditional spa town with mineral waters and modern health facilities in the Pyrenees in Southern France and your main access road is crossed by a railway viaduct how do you turn an eyesore to advantage? The answer is a couple of statues!

The town of Tenbury Wells lies within the Malvern Hills District and like Great Malvern was once a famous spa resort. The local paper, the Teme Valley Times, in their Christmas 2017 edition carried a most interesting article about the Pump Rooms and as a result brought to light an interesting artefact. Titled 'The Cranston Heritage', the Times ran an informative article on the local works of architect James Cranston, suggesting that Tenbury probably retains the largest surviving collection of his works. This includes the distinctive Pump Rooms alongside the Kyre Brook as illustrated left. Other examples include the Round Market and the Corn Exchange both of which date from the mid-19th century. 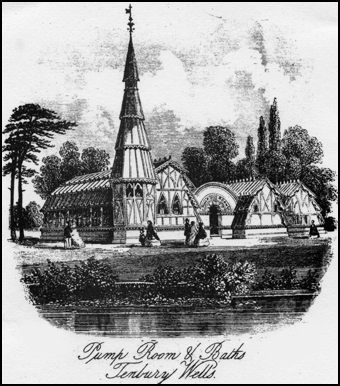 The first saline spring in Tenbury was identified in 1839. In the same year, Dr Granville, the author and international expert on mineral springs and associated spas, visited Tenbury and proposals were put forward to develop the health spa. Further wells were soon sunk locally to reach the saline geological strata some 42 feet down. As the spa developed, in 1862 James Cranston was given the opportunity of designing and building new spa pump rooms and baths for those participating in the mineral water cure. The result was a pioneering prefabricated building to the distinctive Chinese Gothic style which survives to this day. Towards the end of the 20th century the spa treatments had long been discontinued and the building fell into a state of extreme decay. Then in 1989, with funding from a variety of sources, the Tenbury Pump Rooms were restored to their former glory and in doing so provided the town with a unique iconic building for public affairs and meetings.

The article in the Teme Valley Times reminded us of a piece of thin metal that we had been given some time after the restoration. Apparently retrieved from the builders rubbish heaps, it measures 33cms x 11.5cms. Most interestingly it is decorated with a pale blue design suggesting that it was a frieze or similar. Although seriously corroded, the decoration is still discernable as can be seen from the illustration below. We have never been able to identify its former positioning in the original building, assuming it was once located there. Is it a last remaining panel from a forgotten internal décor? We would welcome readers' comments before we possibly offer it to Tenbury Museum as a Cranston artefact from the past - see picture below.

A recent editorial from Malvern Historical Society Newsletter Australia about a cricket bat.

A momento of friendship 1948 A cricket bat, signed by the Worcestershire County Cricket Club cricket players, was presented to Malvern, Victoria from Malvern, UK, in 1948.The following is a transcript of the accompanying letter. 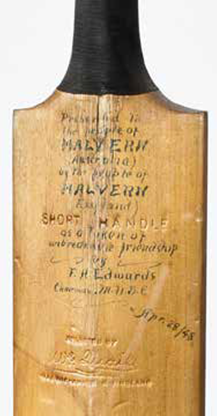 It gives me the greatest possible pleasure to extend greetings to you and the citizens of Malvern, Australia, on behalf of the townspeople of Malvern, England. We in the Motherland are not forgetful of the great service rendered by Australia, particularly by her fighting sons, during the war years, nor are we unmindful of the part she is playing to assist in our post-war recovery; nor too, do we in Malvern, forget the kindness and beneficence of the people of Malvern, Australia in sending of food parcels which have served to enhance the bonds of friendship which exist between the two towns which I can assure you have been very greatly appreciated. As a small momento of the friendship existing between the two towns and in the hope that it may serve to perpetuate and preserve that friendship, I am to ask you to accept a cricket bat on which is inscribed the signatures of the members of the Worcestershire County Cricket Club, which include, with one exception the signatures of the Worcestershire team which met the Australian XI in the opening match of their 1948 tour. The missing signature is that of R. Howarth, who at the time the signatures were obtained was on tour with the England team in South Africa. Also on the bat are the signatures of the members of the Malvern Cricket Club and the Barnards Green Cricket Club, which are the two main Clubs of the town. A cricket bat has been selected as symbolic of the spirit of friendly rivalry between our two countries but at the same time it serves to remind us of the team spirit which has brought us through the dark war years and without which we cannot hope to succeed in building up a new world founded on friendship, fellowship, peace and prosperity. The bat has been despatched to you under separate cover and I am to ask that you will accept it on behalf of the citizens of Malvern, Australia, and to express the hope that it will find a place among the treasured possessions of your City and in the hearts of your citizens as a token of lasting friendship from the people of Malvern, England.

In 1910, Maddie sent the following card from Malvern Australia, halfway around the world to her homeland England, outlining her wish to remain in contact with friends and family there. Today we send this card on behalf of Malverns Worldwide and Great Malvern England to wish you, Malverns elsewhere, NEW YEAR GREETNGS for 2018. May the coming New Year enable you to prosper and develop not only in a physical but also in a spiritual sense. We look forward to making contact in the New Year enabling the concept of Malverns Worldwide to evolve further as a basis for international friendship. 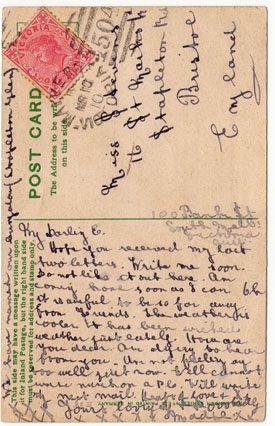 This edition of the Newsletter has been an opportunity to express our rationale and plans for Malverns Worldwide, albeit at the expense of editorial on our Malvern Springs and Wells theme. The balance will be restored in the next Newsletter. In the meantime do go and have a look at the Tenbury Pump Rooms if you have not seen them before and spot where the frieze came from.