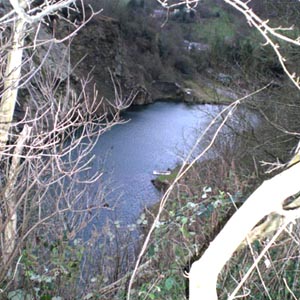 Location: This source lies in the flooded Hollybush Quarry.
Description: The quarry contains a substantial lake fed by groundwater where it penetrates the water table.

Malvern Stone has been quarried on a small scale since man first occupied the area but it is since the 1800s and the expansion of the industrialised society that resulted in the hills being a source of valuable commercial stone. The stone is hard and not easily worked, breaking into irregular lumps. It is used extensively for walling in both buildings and boundaries and for road stone. The Lords of the Manor traditionally enjoyed the quarrying rights with unlawful digging later becoming an issue that was pursued by the Malvern Hills Conservators.

The passing of the Malvern Hills Act in 1884 attempted to restrict the amount of quarrying but the Malvern Hills Conservators, who were empowered to uphold the terms of the Act were powerless to stop the lords of the manors from continuing their spoliative custom.

By the 1900s huge scars were appearing on the hillsides and this was causing concern. There were 13 working quarries in the Malverns at this time. A fierce battle raged between the conservationists and the quarry operators over many years. George Bernard Shaw was one of the principal protagonists and in 1929 wrote in The Times:

"The approach to Malvern from the great plain of the Severn...now has a peculiar horror...the northern hill...hideously disfigured by three gigantic scoops, reaching so near to the top of the ridge that they bring home with a shock the appalling conviction that before very long the scoops would go right through, leaving between them a couple of enormous jagged teeth of hill, which will presently be blasted away in their turn, changing the Malvern Hills into the Malvern Flats."

And in the local paper: "Here you have I was going to say, the beautiful Malvern Hills - they certainly were there when I first came to Malvern, and I admit that there is some of them left, but very soon they will become a mere memory. As I look at the few relics of these once beautiful hills, and I see the enormous gashes made in them, I think of the enormous amount of money spent in ruining them... and I cannot help thinking that with one hundredth part of all the labour and money taken to make these horrible quarries, you could have made a beautiful out-of-doors Theatre - a Theatre on the Hills".[1] On another occasion he suggested that the quarries should be filled with disuses theatre tickets.

Shaw did not stop there however. He launched an attack on the Conservators. He proposed that National Park status was called for. Had he succeeeded in this wish the Malvern Hills would have been England's first national park. On this web site we argue that the Malvern Hills were exactly this in all but name.

As the conservationist lobby gained support, rationalisation of the quarries in use meant that by 1934 the Pyx Granite Company was working North Hill, Scar and Tank Quarries in the north; The Malvern Hill Granite Company worked Tolgate and Upper Wyche Quarries, and then there was Hollybush and Gullet Quarries operating in the south. In the late 1930s Earnslaw Quarry was opened but, after the war, declined in spite of earlier being a large scale operation. Aided by the 1924 Malvern Hills Act which enabled the Conservators to compulsory purchase land, manorial rights and mineral rights. All quarrying eventually ceased by the early 1980s. Hollybush and Gullet Quarries were the last to close.[2][3]

Subsequently the weathering of the rock, flooding and the invasion of plant life has resulted in some former quarries becoming secret havens of wild life. Others perform the useful function of providing discrete car parking. 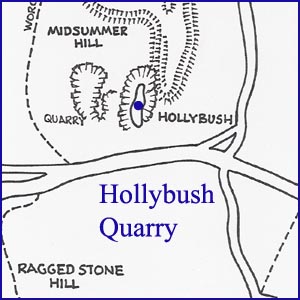