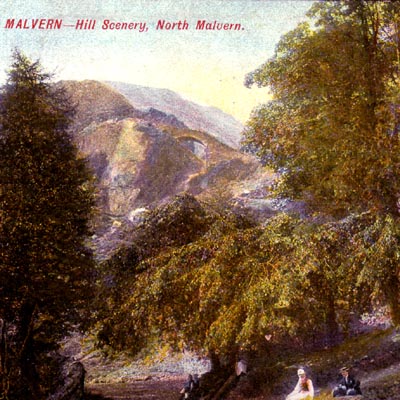 Location: at a higher level behind the Clock Tower
Description: an underground reservoir and other features

The population of Great Malvern almost doubled between 1851 and 1861 but the fragile pipes of the public mains produced not a drop more water. Residents and visitors struggled from one dry summer to the another. In July 1871 a public debate concluded that a new, large tank should be built at North Malvern on the hillside above the Clock Tower. The tank was designed by the town surveyor, who also supervised the work. He had never undertaken such a grand project before. Work began at the end of 1872 when the weather was not quite at its best; in June 1873 the central arch and some of the brickwork collapsed and a sudden rainfall swept away a further 18 feet of brickwork. Despite these drawbacks the new tank was completed by February 1877. Fifteen hundred curious local people visited the vast, cathedral-like tank during a grand opening ceremony between midday and 5pm on a cold, raw 26th February. Regardless of the weather there were streamers and banners; the post office band played; the area was illuminated by gas; a primitive steam lift carried the ladies up the hillside, and all had a memorable time.

The North Malvern Tank measured 99 feet x 85 feet x 19 feet to the top water line. It was expected to hold one million gallons but only held 720,000 gallons. It was fed by surface runoff water and the North Malvern hill springs, but was later supplemented by a borehole in Upper Howsell sunk in 1903. Once the tank was completed the water from Charles Morris' tank at the Clock Tower was reduced to a trickle, so many inhabitants lost their free water and were forced to accepted metered water. Charles Morris' philanthropic gesture of providing free water was defeated by the Local Board. By the 1970s all his remaining tanks were abandoned in favour of the public water supply, although several of them still have water flowing from them.[1] The water from the North Malvern tank runs into the collector main. This pipes the water to British Camp Reservoir, where it runs to waste, except for a small quantity that feeds the Malvhina Spout on Belle Vue Terrace in the town centre.

The only external evidence of the huge tank is a grassy plateau with green chamber lids, up behind the Clock Tower. In recent times there has been a move to fence the tank which has been resisted by the Malvern Hills Conservators.[2] On the hill above the North Malvern tank is the remains of an old chlorination plant. This was a small stone building, erected during the war. It contained pipework and crock basins but was ineffective because it depended on rainfall for its operation. It was vandalised in 1948 and never used subsequently.

The underground reservoir, currently operated by Severn Trent Water, continues to be fed into the collector main. This pipes the water to British Camp Reservoir, where it runs to waste. Except a small quantity that feeds the Malvhina Spout on Belle Vue Terrace in the town centre.

1. The North Malvern Spring in the distance. 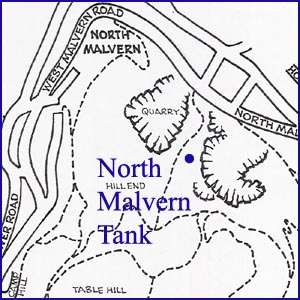