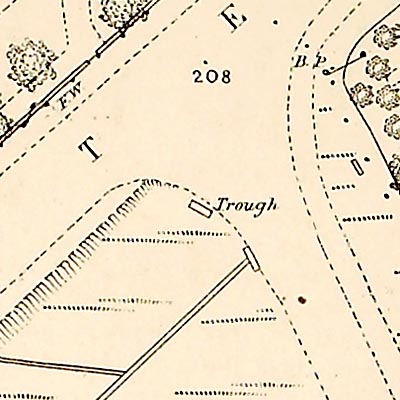 Location: at the junction of Pickersleigh Road and Worcester Road, Malvern Link
Description: a public trough for humans and animals

There was once a horse trough on the corner of Pickersleigh Road and Worcester Road. It was similar to the Barnards Green Trough, comprising a lower trough for dogs and an upper trough for cattle and horses. It was provided in 1901, replacing an old iron one that was moved to Newtown Road. The new trough was the gift of Mrs Pears, widow of Colonel Pears, and Miss Roget (daughter of Thesaurus compiler Dr Peter Mark Roget), who was an annual visitor to Malvern.[1] Both ladies were members of The Malvern Society for the Prevention of Cruelty to Animals.

The MSPCA, which had been partly founded by the Pears, was established in 1875 and was responsible for promoting humane feelings towards animals. Its work included organising essay competitions on the subject in schools, prosecuting anyone found ill-treating an animal and giving lectures on kindness to animals, emphasising the fact that much cruelty was done through ignorance and a useful cure would be the study of natural history. The society erected animal troughs around the town and on the hills and some still survive.

For human consumption, a cup and chain enabled tramps from the nearby tramps' ward to drink there. The local paper painted a pleasing picture of the busy rural scene, at the same time revealing the early Edwardians' concern for animals and their welfare. Any day, it said, people could witness that this trough was more appreciated by beast then man. 'Not only do the passing horses find a welcome draught, but the many animals which graze on the Common find their way to the spot from time to time, while in the hot weather numerous dogs drink and splash happily in the trough provided for them.'[2] In May 1904 a report to the SPCA stated that during the course of one day 86 people, 81 horses, 17 dogs and 5 cows were counted drinking at Link trough.[3]

Water was not always the only thing found in the trough. During the Second World War, when a bomb destined for the railway station hit the Link School by mistake, the blast knocked P.C Jack Williamson right into the horse trough. By the mid-1950s the supply for humans no longer worked. It was said that 'In some cases drinking fountains have been discontinued because it is felt they are unhygienic, because parts of them disappeared, and because they are misused by the public.'[4]

Water for animals was still available here as recently as 1956 but late in 1962 there were complaints about the state of the trough. There were suggestions that, since there were no longer horses and ponies permanently tethered on the common, it might be moved back from the edge of the road though removed entirely. Another suggestion was that the trough should be drained and offered to Malvern Urban District Council for use as flower planters. The Council said it needed repairing and was useless where it was. In 1964 an advertisement offered it free to anyone who wanted and collected it. No one wanted or collected it. In June 1965 the conservators' ranger broke it up and carted it away. It has completely disappeared.

1. The site of the trough 1856/7, courtesy O.S. sheet XL.5.21.
2. The trough in the 1950s barely visible behind the approaching lorry.
3. The modern day site of the Pickersleigh Road trough. The trough looked very like the Barnards Green Trough. 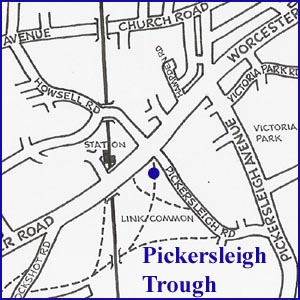