Friends are the recognised guardians of Malvern's water heritage (Malvern Gazette 1 March 2013 p.14). We are an independent voluntary group who relentlessly promote research and celebration of the Springs, Spouts, Fountains and Holy Wells of the Malvern Hills and Malverns Worldwide.
FAKE NEWS - FOOLS GOLD 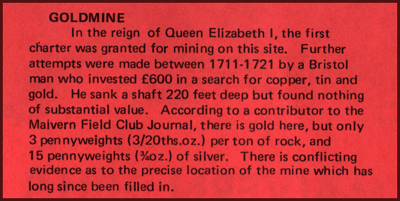 In the 1st April edition of the Newsletter (no. 77) we published some fake news about gold being exploited secretly in the Malverns. This was of course Fool's Gold on April Fool's Day. However we have found this verification illustrated above of gold in the Malvern Hills albeit some centuries ago and in minimal quantities. Now you know as much as us but do explore the subject further on our web site where we have page 38 accessible via the on-line INDEX.

By chance the Chapel Pump comes to light
A recent surprise discovery is this springs and wells site previously missed. Located in St Andrews Churchyard at Poolbrook, this iron pump sits in the corner of the churchyard. It no longer dispenses water. It was manufactured by Joseph Evans of Wolverhampton, a well-established Victorian company founded in 1810. It is believed to date from the 1880s when the Chance Memorial Chapel was built on the site. It subsequently became St Andrew's Church and is still used for worship and social activities. The chapel had an extension built in 2009 and the pump can clearly be seen in photographs taken at the time.
The chapel was originally named after Edward Chance (died 1890), who lived at Lawnside in Avenue Road. He was a local entrepreneur who ran the Chances Glass Works in Birmingham and later Malvern. This well-known business provided glass for the Crystal Palace in South London as well as the Houses of Parliament. Amongst their other products were lighthouses and one is preserved in Port Adelaide in South Australia. The full details are available on our springs and wells web site, see site C3:1.

In May 2017 envoys Cora Weaver and Dr Bruce Osborne from Malvern England visited Malvern Pennsylvania extending the hand of friendship between the two Malverns. Hosted by David Burton, Mayor of Malvern Pennsylvania, the visit included a presentation about Malvern England to the Council and citizens. This was followed by a historical tour masterminded by the local Historical Commission. Symbolic gifts and letters from each town were exchanged to provide permanent reminders of the occasion. A picture from and of Malvern England was presented to the Council as part of an exchange of gifts with the mayor and Malvern Borough Council in England. England received a state flag of Pennsylvania that had flown over the State Capital in Harrisburg on the 26 April 2017, together with a number of books detailing Malvern's history. 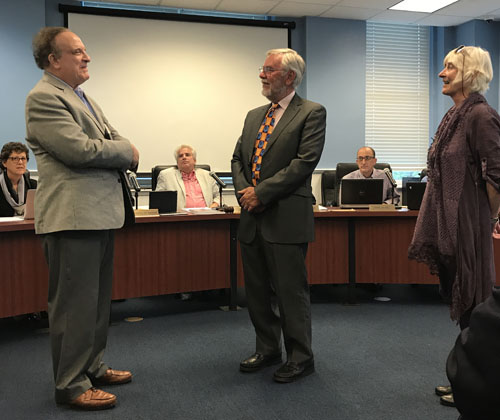 In the picture Senator Dinniman, who, at the well-attended Council meeting, presents the book The Sacred Challenge to envoys Cora and Bruce. He outlined the enthusiasm that existed locally for a friendship across all Malverns. In return he received a book on the historic founding and the springs and wells of Great Malvern England.
Following the presentations, the local Historical Commission masterminded a tour of Malvern which included the Paoli Battlefield. This site of the Revolutionary War battle of 1777 is marked by two iron cannon. The visitors were then shown the History Centre where Malvern's heritage can be explored.
The trip, it is anticipated, will have many repercussions and will lead to a strengthening of the link between the two Malverns. One particular repercussion that perhaps we could have anticipated is that Malvern Pennsylvania wants a George Bernard Shaw mulberry tree! Many more details of the trip are on our web site. Go to www.malvernsworldwide.info and click on the link to Malvern Pennsylvania. Our thanks go to the many new Friends who assisted with recording the event on camera and for making our stay so productive and enjoyable.
Also follow the link to Chester County News -  http://www.philly.com/philly/news/pennsylvania/chester/Malvern-UK-England-Worldwide.html

Would you like to attend a meeting to discuss Malverns Worldwide?
The following suggestion has been received from a Friend, Denise and we would welcome your views.
Would Friends be interested in meeting socially, where we could find out more from Bruce and Cora about the Malverns Worldwide project? Maybe you, too, would be interested in venturing forth to discover other Malverns or maybe would just like to hear more about them? If so, would you get in touch with me so that we can see who might like to get together in the Malvern area in the summer for a drink, a chat, maybe something to eat and to hear more?

I look forward to hearing from you soon!
Denise Preston, Malvern, England
Email to contact with your reply:
dnspreston@yahoo.co.uk 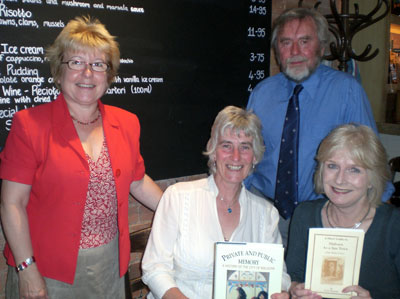 Please note that the Friends of Malvern Springs and Wells does not have external funding, so we would each need to purchase what we consume at a pub or other venue. If you have a particular venue you would like to propose, please say so in your message. In the picture above, Denise with Cora and Bruce and Di from Malvern Melbourne Australia, all participants of the Malverns Worldwide project.
Since its inception by Friends last year, the Malverns Worldwide project is capturing people's interest and growing as a result. One proposal is a study of Malvern trains and railway stations worldwide. Another is to look at the history of hospitals in Malverns world-wide. If you have a particular subject interest that is applicable let us know and we can add you to the informal team. Other possible subjects include researching the founding of the various Malverns and what brought this about. Then there is the possibility of visiting one or more of the two dozen Malverns world-wide. Let us have your thoughts and welcomed participation.
A suggestion we received from the mayors of Malverne New York and Malvern Pennsylvania is that a George Bernard Shaw Mulberry Tree is sent for planting in a prime position within the towns. You will recall that we received cuttings from Malvern, Melbourne, Australia for replacing in 2016 the GBS Mulberry Tree in Priory Park Great Malvern blown down in the year 2000. The cuttings came from a sapling from the original tree sent to Australia in the 1950s. We are pleased to report that there is the possibility of some more suitable cuttings from the GBS tree in Australia. If so this cuts 6 months off the lead time than if we took cuttings from the British trees next autumn.
Afterthought - If someone interested in archaeology is an archaeologist is someone interested in Malverns a Malvernologist?
Mystery Picture in the last Newsletter? 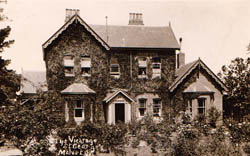 In the last Newsletter we revealed a mystery postcard from a Malvern elsewhere. This was quickly identified by readers on the other side of the world and we received the following email from Di Foster in Malvern Australia.
The postcard of the vicarage at St George's is certainly from our Malvern - as Jane says, the church and vicarage are 2 minutes' walk from my home. St.George's Vicarage is in Malvern, Victoria. I believe it was a school c1914 as well as the vicarage to St.George's Church. Fortunately our History collection includes the same card which is dated 1911.
Many thanks for updating us on the vicarage Jane and Di. We will no doubt have more mystery pictures as we go worldwide!
Tank House arises from the ashes 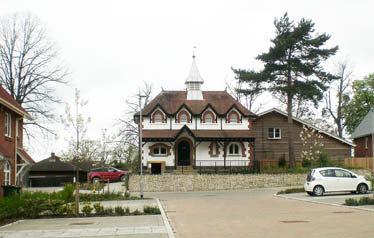 Like a phoenix, the famous Tank House in Colwall stands proudly on what was once the site where Schweppes bottled the famous Malvern Waters. When the closure of the plant was announced in 2010, we went to enormous trouble to retain significant mementoes of the historic bottling works. First, we relocated the Stone Bottle Fountain to the Three Counties Showground where is can still be seen in the garden by the South Gate. In addition the Tank House was in danger. This building was a scaled replica of the Holy Well building and was located on the Colwall bottling works site. In order to ensure its survival while all else was lost, Cora went to great lengths to get it listed. This meant that the future developers incorporated it into the site plans, rather than removed it with all the other paraphernalia of the historic works.
As a result the Tank House now stands proudly at the top of an avenue of modern housing looking out towards the Malvern Hills. The picture above was taken in April this year and speaks for itself. Our thanks and appreciation goes to Coca-Cola who owned the original site and all who helped in achieving this impressive result. Do go and have a look, it is just behind the new convenience stores.
Well Decorating 2017

Once again we are able to report on a most worthwhile weekend when the now famous Malvern Well Decorating took place over the May Day bank holiday weekend. The theme was the 'Tree of Life'. This year we were abroad on the Malverns Worldwide project and had to suspend the presentation of the Founders Prize. Friends reported however that one of the most stunning of the many sites decorated was the Lower Wyche Spout as illustrated. (with thanks to Friend Linda Hart for supplying the above picture.) .The site was decorated by a team from Severn Trent Water. 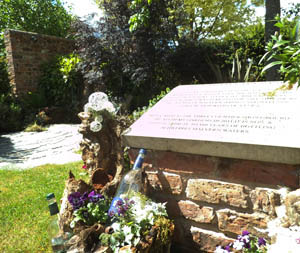 In addition the picture left shows the Stone Bottle Fountain decorated for the first time at this year's Well Decorating festival. It was on display during the Royal Horticultural Society Spring Garden Show in mid-May at the Three Counties Showground.