Friends are the recognised guardians of Malvern's water heritage (Malvern Gazette 1 March 2013 p.14). We are an independent voluntary group who relentlessly promote research and celebration of the Springs, Spouts, Fountains and Holy Wells of the Malvern Hills and Malverns Worldwide.
Glass of Friendship from Malverne New York 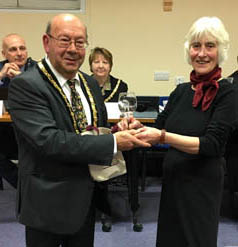 On the 6th December a special gift was presented to the people of Malvern as a sign of friendship from the other side of the Atlantic. At the Council meeting that evening, Cllr John Raine, Chairman of Malvern Hills District Council, received a wine glass from Malverne Historical Society in New York as a way of formally recognising the link between the two locations.

The glass will now go on show in the Council House in Avenue Road, along with the other numerous artefacts presented to the people of Malvern over the years.

Cllr John Raine, Chairman of Malvern Hills District Council, said: 'I am delighted and honoured to accept this gift from Malverne, New York. My thanks to everyone who works hard to promote and foster the links between our great town and other Malverns around the world.' 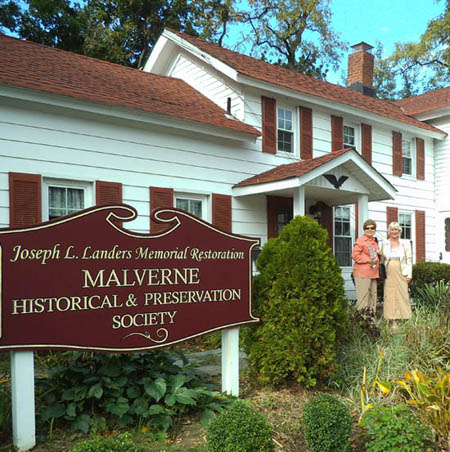 The Friends of Malvern Springs and Wells are endeavouring to link all the Malverns worldwide in a wheel of friendship, with Malvern U.K. as the hub. Mayor of Malverne Patricia Norris-McDonald suggested that all the Malverns should receive cuttings from the mulberry tree that was planted in Priory Park in June 2016 by Di Foster from Malvern, Victoria.

Pictures:
1. The glass was handed over by Cora Weaver, of Friends of Malvern Springs and Wells.
2. Malverne Historical and Preservation Society in Malverne, New York. 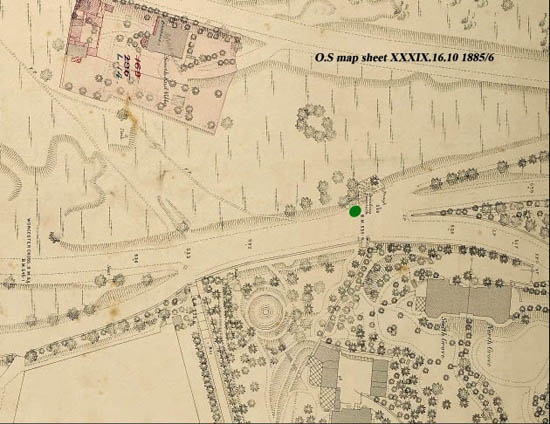 The last newsletter (no.75, December 2016) showed the picture below by Mary Brandling, dated 1850, and asked readers to decide the location. A Friend suggested that it is near where Ellerslie Fountain is today, at the junction of the A449 Wells Road, the top of Abbey Road, and the road leading from Wells Road up to the Wyche Road and Foley Terrace. Ellerslie Fountain was erected here in 1860 behind where the women are sitting. The Brandling picture predates this. On both maps (see above and below), the green dot marks the spot. 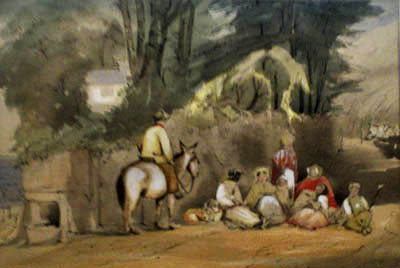 In the Brandling picture foreground to the left is the wayside water feature that would probably have been almost opposite the toll house and used by the toll house keeper and his family. The water feature is no longer there but the water still cascades down the hillside at this spot every winter. If this picture is at that road junction, then the white cottage in the background is debatably in the wrong place. In the 1840s, there were two cottages (renamed  South End Villa - see 1885/5 OS map) but were they a little further south of the house in the painting? 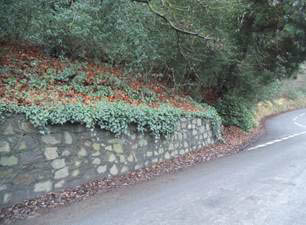 Why might Mary Brandling have chosen that spot to paint her picture? Possibly because it was on that junction near the toll house and would have been busy throughout the day with carts and horses, pack animals, pedestrians, commercial travellers and flocks of sheep being driven to market. Also country women were taking their fruit and vegetables to sell in Great Malvern which, in 1850, was busy and vibrant with wealthy water cure patients and tourists.
If the painting isn't of that junction, where might it be? Give us your thoughts. 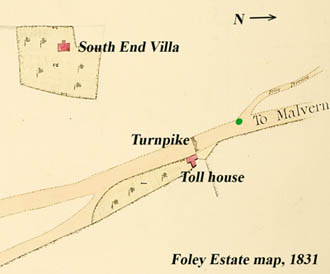 Pictures -
1. The 1885/6 OS map of Ellerslie Fountain.
2 Mary Brandling's pre 1860 water feature painting.
3.The site of Ellerslie fountain today.
4 The Turnpike and Toll House map of. 1831.with the Ellerslie spout site added in green.
Civic Week
Advance notice that plans are afoot for a Midsummer Malvern celebration in 2017 - timed for 17 -24 JUNE this is a date to put in your diaries. Plans include involvement by the Tolkien Society with events highlighting Tolkien's link with Malvern, concerts, gardens open, talks, walks, a schools' literary competition, and lots more. The Civic Society needs support from all local groups and it is an excellent opportunity to promote your own organisation or activity. Contact the Civic Society with your ideas. roy.barber07@btinternet.com
Poolend Spout
We were recently asked to investigate a strange underground structure in Barnards Green. Our investigators went in hot pursuit and reported back their conclusions as follows. 'We have now had an opportunity of inspecting the structure that you mention in your garden in Clarence Road. Looking at both the field evidence and historic documentation, it appears to be a water tank. In view of its positioning it is likely the old header tank for the former Poolend Spout. It is a straight downhill line to the spout from the tank going under the railway bridge.'
Clarence Road was formerly Mill Lane and included one or more mills fed by spring water from the hills. This water would have been contained in a pipe line that fed the header tank, ensuring a reservoir supply for the spout when it was in use. Unfortunately the Poolend Spout is no longer in existence but details of it can be seen on our web site under site number 3.

Malvern Worldwide - Future Plans
This project is now starting to take shape and plans are afoot to develop further this worldwide relationship with other Malverns. As you will have gathered from the opening article in this newsletter, a suggestion from Malverne, New York is that George Bernard Shaw Mulberry Trees are gifted to Malverns elsewhere. This is a project that needs careful planning in order to develop cuttings that are suitable for export. The other task is to develop contacts with each Malvern and this is progressing with a planned trip to Malvern Pennsylvania US later this year. If you would like to make a suggestion or participate in this international project please contact Bruce.
New Year's Eve 2016/17  The Eye Well 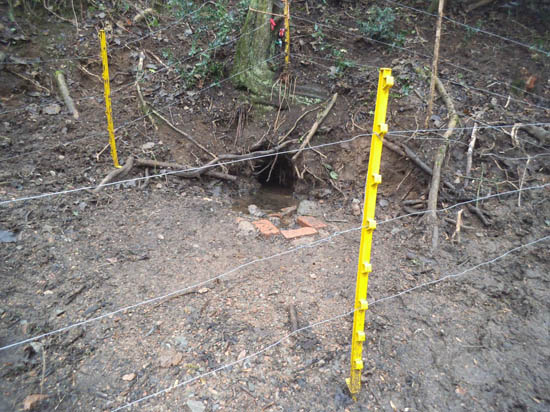 When the Malvern Hills Conservators moved their grazing stock to the southern end of the hills, not only did they construct a temporary enclosure around the animals but also made a special little enclosure for the Eye Well. This was not to protect the stock from the water, nor to protect the water from the stock.  The Conservators' Galloway and Belted Galloway cattle, and the Beulah Speckle Faced and Cheviot ewes, are watered from bowsers on the hills. However, if there is a spring within sight or smelling distance they will head for it. The fence was installed to prevent the stock from trampling down the land adjacent to the Eye Well and damaging the delicate root structure of the tree above it.
Thank you MHC for preserving our spring water heritage.
Spring Time on the Malvern Hills 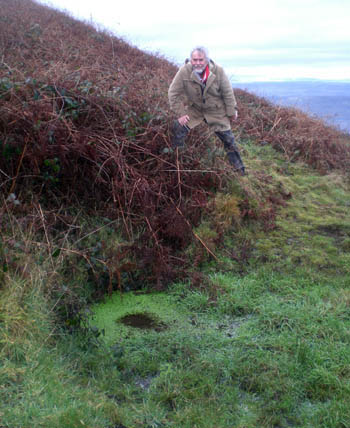 For many years we've been puzzled by a spring that is marked on a Conservators' map that dates back at least to the 1980s or earlier. The spring is marked on the north-east slope of North Hill directly above Lodge Spring at approximately 352 m high. That is very high up, over 50 m higher than the Dripping Well, which emerges at about the 300 m contour. The spring is shown as situated above Lady Howard de Walden's Drive but below a minor footpath that crosses the hill's summit.
Undeterred, when the Christmas pudding and the delights of the New Year were weighing heavily on our vital organs, we shimmied up the hill to look once again. The spring was difficult to find, nestling in the bracken, but also because it is located directly above Osborne's Fountain, which is approx. 50 m north of The Lodge.
There was no movement in the pool of water, suggesting that it is a surface spring, being a hollow where water from above collects. It's an ideal spot for roaming livestock and there is plenty of hoofprint evidence to indicate that it is well used.
What name might this watering hole be given? Lady de Walden's Watering Hole or North Hill Spring? Perhaps it's time to recognise the immense contribution that the Malvern Hills Conservators make to the maintenance of the Malvern Hills and our consequent enjoyment up there by naming it The Conservators' Pool or MHC Mere. Send us your suggestions.
To get there: take the steps near the bottom of the drive that leads from Worcester Road up to The Lodge (now called Hill House) and Lodge Fountain. Zig-zag your way uphill until you meet Lady Howard de Walden's Drive somewhere above Ivy Scar Rock. (Use the white aerial mast up The Lodge's drive to get your bearings.) Walk northwards until you see a narrow path leading to the top of the hill. Take the path - quite a climb - and look out for the pool about 20 metres below the summit. The pool is about two and a half metres in diameter and the views are worth the effort.
Picture - Bruce on a cold winter day having climbed North Hill to near the top finds the spring after an extended search.