Ellerslie, Evendine, Holy Well, Jubilee, St Ann's, , Wyche, etc. - what springs to mind when you read this distinguished list? These are not merely the names of some of our most popular heritage water sources but also the names of the conference rooms in Qinetiq's new Tom Elliott Centre in Malvern. The centre was opened in August 2006 and the idea to name the rooms after local springs and wells was that of Nicola Hughes and staff in QinitiQ Estates Department. What a lovely idea!

Malvern Spa features on BBC documentary.
On 1st June the BBC screened a documentary about Florence Nightingale, the Lady with the Lamp of mid 19th century Crimean War acclaim. This was seen as the opportunity to air modern interpretation about her role in the and how errors such as polluted water supply led to high fatalities of troops in her care. The revelations include Nightingale's belated recognition of her hospital's mortality rates and the Government cover-up. Troops fared better in field medical units than in her hospital due to unsanitary conditions. The resulting guilt led to a mental breakdown and it was her family who came to the rescue so aiding her recovery. During this period she withdrew to Malvern Spa to come to terms with the realities of her situation. We know that while here she stayed at Malvernbury where she was a patient of Dr Edward Johnson. There is an appropriately named spring in the garden, leading to an ornamental pool and perhaps it was Malvern Water as much as her family that enabled her to eventually return to a more normal routine, albeit shadowed by remorse for the rest of her life. For more details see our forthcoming book on the springs and wells.
St Werstan's Labyrinth - Rosebank Gardens
It was February 2007 when we first discussed the idea of a labyrinth in to celebrate St Werstan. We spent quite some time looking at other labyrinths, discussing the implications with labyrinth experts, with officers from Malvern Hills District Council, and with landscape designers. The spot chosen was of special significance in that it is adjacent to St Werstan’s original cell and chapel. Finally, at some cost, we had a formal design drawn up which met general approval. We also secured funding from sponsors. Planning Permission was then sought and we were delighted that Malvern Hills District Council's planning officers recommended approval of the project. 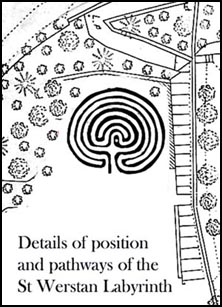 In a way that we had not anticipated, our proposal stimulated further interest in the future of and understandably the long term future is now under consideration. You will have read in the local papers that there are now numerous other plans afoot for . These include some major improvement schemes that are still under wraps. MHDC is looking at the long term strategy for improving not just but the whole town. Due to the uncertain future of our chosen venue we are faced with a long period of uncertainty until the final future of the Gardens is determined. Under the circumstances we have decided to withdraw the labyrinth scheme while we reassess the situation. Obviously we are very disappointed, but just watch this space!

In the last newsletter we highlighted the innovative bifurcating spout installed at Hay Slad with HLF money. This raised a comment from one of our Friends regarding the now famous bifurcating spout and Colwall statutory compensation water. The concern is that the smaller bore pipes might not pass enough water to comply with the volume that should flow to Mathon Brook .Two one inch pipes pass substantially less than one two inch. Apparently the Mathon Parish Councilors used to turn up regularly with buckets and stopwatches to make sure that they were getting the water they were entitled to. We have asked the HLF/AONB Officer to comment but at the time of going to press he has not given a response for the Newsletter. 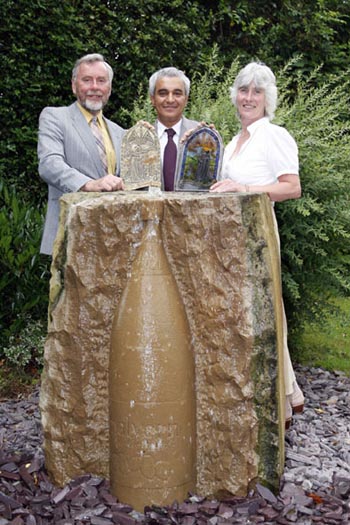 Readers will recall that two years ago we balloted Friends regarding a possible St Werstan Award for the Stone Bottle Fountain at the Colwall Bottling Works. The result of the ballot was that the award was made shortly afterwards. The story does not end there however. We were honoured last month when Sanjay Guha, President, Coca-Cola Great & visited the and the bottling works to receive a St Werstan Window in recognition of their stewardship of Malvern's most famous water.

It was in 1927 that production was switched to the Primeswell source near British Camp and this led to the era of modern day bottling. In the 1980s the bottled water industry was revolutionised with the upsurge in demand. Production and marketing became highly sophisticated. In spite of tighter regulation and the demands of modern day marketing placed on water bottlers, the bottling works at Colwall has survived. There can be no doubt that this is due to the astuteness and support of Coca-Cola Great who own the site and bottling partners Coca-Cola Enterprises who manage and maintain the site. Here we have a charming local enterprise, employing about two dozen local people. This we believe is something that we in Malvern should be proud of. It promotes Malvern world wide and establishes an awareness that benefits the local economy in many ways.

In recognition of all these aspects of Malvern, The Original, English Water and for the subtle support that Coca Cola give the local community, it gave us great pleasure in presenting Sanjay with our St Werstan Window and plaque. St Werstan the Martyr was the founder of Malvern and is commemorated in the 14th century windows of Great Malvern Priory. His cell was located near a Malvern spring and his memory is perpetuated as patron saint of Malvern Springs and Wells.
Doc Holliday's Connection with Glenwood Springs.
In the last newsletter we identified the connection between Doc Holliday the gunfighter of fame with where he died. We suggested that there may have been a link with Glenwood Spring, Malvern, UK., once used as a source of bottled Malvern Water. A Friend has now identified another piece in the intriguing jigsaw of the Holliday family connection.
John Henry Holliday, later known as Doc, was born in on August 14, 1851. His father was Henry Burroughs Holliday from . In 1861, Doc's father accepted a presidential appointment from Jefferson Davis to serve as a Quartermaster in the 27th Ga. Infantry, of . He was soon promoted to the rank of Major and fought in the of Malvern Hill. In 1862, he was forced by poor health to leave 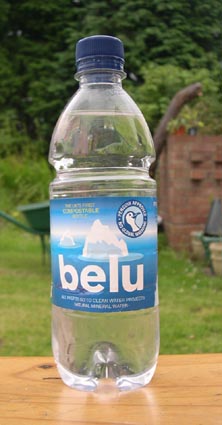 the army and return to his family in . As the war came closer to home, the Holliday family moved south to , where they settled on a farm seven miles North West of Valdosta. This further connection with Malvern is all very confusing. Please let us know if you can guess the full picture.
'Store in a clean, dry, rabbit free place', is the advice Belu prints on its water bottles. If this seems odd, then read on.
Belu is one outcome of the launch in 2001 of Global Compact, the U.N's attempt to solve some of the world's environmental problems. The water is Wenlock water, bottled at source at the bottling works at Church Stretton in . Like Malvern spring water it has very low mineral content, because like Malvern water it emerges from the Pre-Cambrian hillsides.

But best of all are the bottles. Belu (the root of the word is Latin for 'beauty') makes its bottles out of CORN!  So they can either be recycled or composted. The bottle label states that 'commercially composted' it takes eight weeks for the bottle to decompose back to soil - a million times faster than standard plastic bottles. That must be good for the environment. I shall domestically compost my bottle and let you know what happens.

Summer 2008 Opening will put the Spa back in Malvern

If you have been down recently you will doubtless have caught sight of the impressive new building and sign for the new spa. This is excellent news for local tourism and the town in general because it will attract visitors from far away. 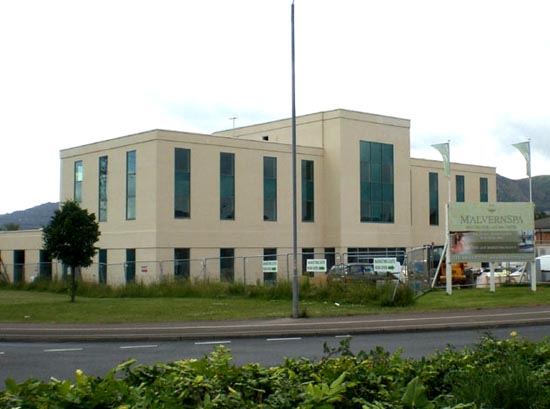 The dramatic beauty of the forms the backdrop to the unique hotel and spa facility that is now open. For the first time in a century a mainstream spa using the famous local Malvern source waters will make it's appearance. The brainchild of Colwall entrepreneur John Williams, this world class Spa - Hotel - Health Club complex offers a unique experience. On offer there are hydrotherapy pools of warm bubbling Malvern source waters. Jets of air and water gently massage and stimulate you as you glide between the connecting indoor and outdoor pools. Imagine swimming out on a frosty day or the evening twilight into warm Malvern source waters from deep underground aquifers.

It all spills out at Spili

Once more we develop links with other parts of the world and this time it's . Those of you who have explored the island will probably have seen the famous spouts of Spili. No need for a Springs, Spouts, Fountains and Holy Wells guide of with maps - they are all in one place! Our roving explorer Friend noted 25 spouts in the main assemblage with 4 more nearby, all running except two. Situated some 30km south of the town of , and approximately in the middle of the of , Spili has everything for the visitor who wants to experience ''natural ''. which hovers over the town and the cobbled streets and flowering shrubs are a photographer's dream. In the centre of the village is the Venetian fountain with a long row of stone lions heads splashing welcome cool water into the trough below.

Who are Friends? Friends promote research, conservation and celebration of the Springs, Spouts, Fountains and Holy Wells of the Malvern Hills and of Great Malvern as a . If you would like any back numbers of our Newsletters send a large SAE to Bruce with details of which ones you require. There is no charge and they are now collector's items!