NOW AVAILABLE - The Illumination of St Werstan the Martyr - a detailed study on the legend and authenticity of St Werstan - by Cora Weaver & Bruce Osborne, 2006, Cora Weaver, Malvern, 53 pages, 20 illustrations, 2 maps, Size: A4.

This scholarly work re-examines the legend of the founding of Malvern in the 11th century. It concludes that St Werstan was the original martyr saint who established his hermitage near the present day St Ann's Well. His legend is recorded in the ancient windows of Malvern Priory but has been erroneously dismissed by some historians as a fabrication. This work puts his life and work into a proper perspective and as such plays an important role in understanding Malvern's history and St Werstan's relevance to the local Springs and Wells.

What Malvern now needs is a pilgrimage focus for St Werstan. , alongside the 99 steps ancient may be a good location for a St Werstan feature - any ideas welcomed.

Plan ahead by entering the following date in your diary - Thursday July 12th a coach trip for the day to Buxton Spa and Well Dressing - this is a Malvern Civic Society function organised by Bruce that Friends can join. Buxton Civic Society is acting as host. If it proves to be half as enjoyable as the Llandrindod Wells trip earlier this year it will be a good day out! 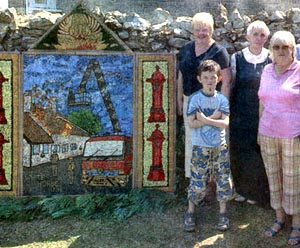 Can well decorating be used in a way that is more relevant to community life? Friends from the Isle of Wight have drawn our attention to their local Whitwell traditional well decorating, as featured in the local . The village pub, probably the oldest on the was devastated by fire recently. The loss of the White Horse pub meant that the social centre of village life was destroyed. Determined to reactivate their community spirit, this year the villagers used the fire as a theme for their well decorating. The celebrations became a symbol of new birth and new hope for the future. Whitwell took its name from the well in the village that was a place of pilgrimage in the Middle Ages. It was also a healing well of some repute. Today it acts as a focus for village revival demonstrating how well decorating can be given a direct 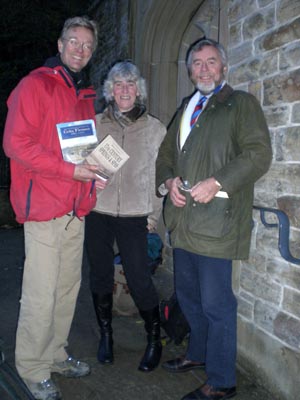 relevance to the spiritual and cultural values of the community. Sandra Lloyd, the parish vicar blessed the well as part of the celebrations, giving thanks for the water and for the village itself. We are informed that the White Horse is now being restored, which gives the event a good outcome.

We have been working with a production company on the new BBC2 series for next year 'Great British Travellers' In the picture media personality Nick Crane enjoys a copy of 'Rediscovering 17th century Springs and Spas in the footsteps of Celia Fiennes' with the authors Cora and Bruce.

HLF project for springs and wells

For some time now we have been in communication with the Heritage Lottery Fund Offices regarding the grant of nearly a quarter of a million pounds for restoration of Malvern Springs and Wells. The grant was announced in 2004 and the project is being implemented through Worcester County Council as grantees and the Area of Outstanding Natural Beauty offices are managing the programme of works. At the time there was envisaged 10 major projects and up to 10 minor projects. As a result of our dialogue we can now give a summary of project plans and progress on our web site. The following is work has been completed to date.

Landscaping works including the Old Moses Folly were completed in December 2005 (paving mid May 2006) additional benches and tables have been supplied.

After several years we still await the major enhancements of the many sites submitted on the original application for HLF funding.

Calistoga - town of and spas

This autumn presented the opportunity of a study tour of another resort that boasts numerous springs and wells, this time in . At the top of the , centrally located between and counties, Calistoga is the historic resort destination for wine, water, and wellness. Visit wineries, take a balloon ride, hit the hiking or biking trails or just relax with a treatment in a spa. Numerous modern spas have developed based on the thermal waters that abound. Unique shops, galleries and fine restaurants dot the historic downtown, which is easy strolling distance from the many inns, hotels, and of course world-class spa resorts. This is and wine country as it was before freeways and fast food. Calistoga lies at the foot of and volcanic ash is incorporated in some of the therapies on offer. Other activities available include the restored 1886 Railroad Depot, the Petrified Forest, the , Calistoga’s Old Faithful Geyser and much more - all enabling you to explore Calistoga's rich heritage of Chinese quicksilver mines and The Silverado Squatters by author Robert Louis Stevenson. Malvern Springs and Wells are rapidly becoming part of a world wide community of similar resorts

Letter from a Friend

Thank you for the Newsletter - I always enjoy reading it.
I just wanted to report on the Dripping Well as I have been up to visit it for the first time since I had a small op. in April. It was trickling rather than dripping, and looked much as ever. Lots of lush greenery all around and robin, dunnock, chiffchaff, blackbird and linnet all went for a drink whilst I was watching from nearby. A few very bright tormentil were growing around the edges of the hollow, and in the wider surroundings there is a very good crop of bilberries - though becoming overgrown by bracken in many areas. The local birds are already enjoying the bilberries as shown by purple poos on the path. All best wishes,

The 'St Werstan Award for outstanding endeavor in the conservation and renovation of our springs and wells and their environment' was initiated in 2005 in conjunction with Malvern Natural Mineral Water. So far we have made two awards: the first to Penny Cottage in Malvern Link and the second for Stone Bottle Fountain at the Colwall bottling works.

We have now received a nomination from a Friend for the long term conservation of s Well by the Malvern Hills Conservators, culminating in the landscaping work that was completed at s Well in 2005.

The history of the s Well valley and spring is linked with St Werstan and the founding of the religious community in the locality in the 11th century. The earliest written evidence that we have of s Well so named is the 1744 Foley estate map, when a straight path led to it from the village; the earliest published analysis was by Dr John Wall in 1757.  The water would have been a streamlet, issuing from the sub surface until the pump room was built c.1819. The octagon extension was built c.1860. For decades St Ann's Well was the highlight of a day out for excursionists but by the 1960s it was described as dank, dark, dreary, damp and depressing and was scheduled for demolition. The building was saved though the landscaping remained fairly desolate. Some years ago the Malvern Hills Conservators built new public toilets at the site, carefully hidden from the well by foliage and 'landscaped' with a turf roof. In 2005 the area was again landscaped with money from the Heritage Lottery Fund. New paths, fences and plants have enhanced the pond and the old, dry cascade to the right of the well house is now in working order - albeit having been subsequently dry throughout the summer of 2006. Completion of the work was celebrated at the well on 9th December 2005.

The appraisal is based on six factors, preservation, environment enhancement, public accessibility, provenance, maintenance and general WOW! factor.Do go and have a look and see what YOU think - and please let us know using the appraisal form attached to this newsletter. It is Friends who decide, using the appraisal scoring, as to whether the award is justified. Your vote counts! 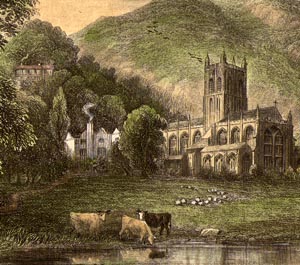 In the 1850 picture, the entrance to the s Well valley and the site of St Werstan's Oratory is seen high left behind the Priory.

Trip Report
SPA TREK DAY TRIP On the 24th August a party set of from Malvern to explore the heritage spa town of . This was a guided coach trip organised by Malvern Civic Society to which Friends were invited via the Friends Newsletter. The tour was led by Bruce, assisted by Cora and was timed to coincide with the annual Victorian Festival at Llandrindod. Arriving just after 10 am the party went on a conducted tour of the historic spa area and the afternoon was taken up enjoying the Victorian revelry and exploring the rest of the town. The day trip was so successful that it will likely become a regular annual event. In 2007 it is intended to run a similar trip to Buxton to coincide with their Well Dressing. This generally takes place in 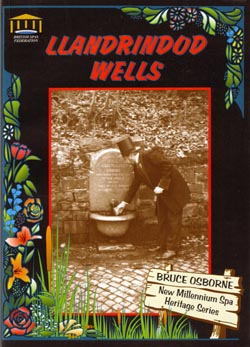 July. Details are posted elsewhere in this Friends Newsletter.

Diary Date - next year the legendary Springs and Wells Coach Tour will take place on Sunday 6th May. Book this date for a tour of the hills to be remembered.

Friends seek to save The Myrtles Fountain

In conjunction with the Civic Society, a submission has been made to the Planning Department about the proposal to develop in . We are concerned about the stream and stone basin/fountain. If the development proceeds, the stream that runs down the middle of Northcot's garden, would run through the middle of the Eastcot house site into the stone trough in the drive to the east of the proposed site. We have asked that the stream be landscaped/diverted to allow it to continue to fill this water feature.

In the last letter we raised the issue of a possible tractor train taking visitors up to s Well. A Friend comments: Thank you for the Friends newsletter - which I always enjoy looking through. In response to your comment about the land train, I think it would be an excellent idea. I am not sure where to run it from, because of the lack of space around the Elgar statue area (station car park perhaps ?? - or create a good use for the Gardens at the foot of the 99 Steps).

However, from the numerous responses, verbal, written and emailed that we have received the majority view is that such a facility is unwelcome. However one Friend commented as follows: I have often wondered if a funicular straight up would be a good attraction for Malvern to develop. That may not meet with universal approval!! Doubtless the debate will continue, in the meantime we will feed comments back to the Conservators.

Friends promote research, conservation and celebration of the Springs, Spouts, Fountains and Holy Wells of the Malvern Hills and of Great Malvern as a . If you would like any back numbers of our Newsletters send a large SAE to Bruce with details of which ones you require. There is no charge and they may be collectors items one day!  The reason why we have been able to distribute Newsletters to Friends without charge in the past is because of the donations from individual Friends and the generosity of the Spas Research Fellowship, which handles our mail. From 2007 however, due to the ever increasing numbers of Friends (now in their hundreds), we have to make a small charge for occasional Newsletters of 5 pounds for 4. This will only apply to renewals and new Friends.