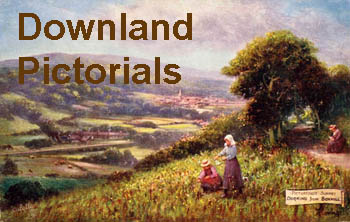 EXPLORE THE DOWNS WITH VIEWS OF WHAT IS PROPOSED AS A NEW NORTH DOWNS NATIONAL PARK. (click the pictures below for full screen image, click your "back" button to return to this page) 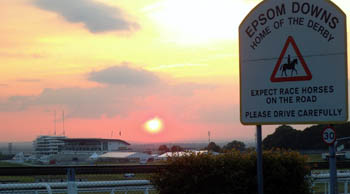 Sunset over Epsom Downs as it prepares for the Derby  - horse racing on the downland is an activity dating back to the 16th century and still going strong. 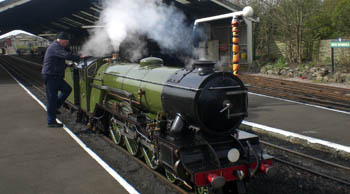 Steam trains are popular with children as well as adults. The Romney, Hythe and Dymchurch Minature Railway runs a line connecting Hythe with Dungeness in Kent. The trip takes over an hour. 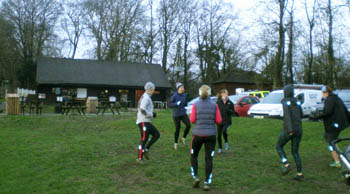 Walking is not the only exercise on the downs - a group of ladies outside the Reigate Hill cafeteria on a winter's day. 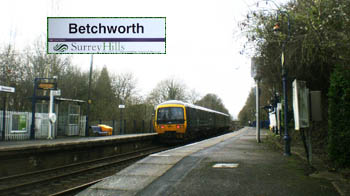 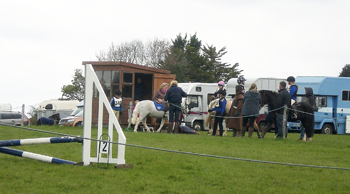 The North Downs has a great tradition of horse riding for people of all ages. On the uplands it can take many forms from local gymkhanas to hacking and even racing. 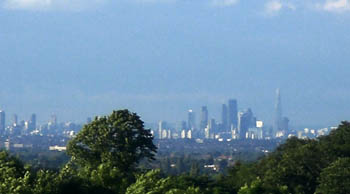 London viewed from the North Downs on a summer's day. The close proximity of London makes the North Downs an accessible outdoor recreation facility for those living in the concrete jungle. 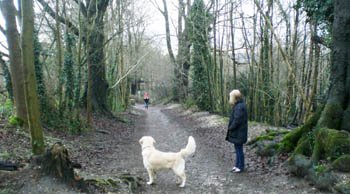 Dog walking along the North Downs Way. For many this is a regular recreational activity on the downland that offers a wide variety of different locations to explore. 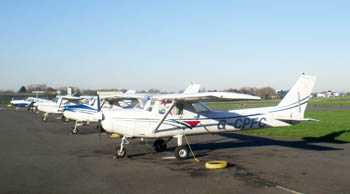 Biggin Hill Airport sits on the North Downs in western Kent. It provides an important facility for recreational flying as well as small commercial traffic. 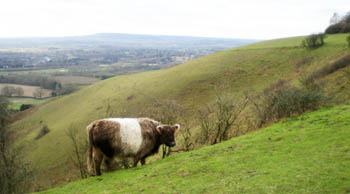 Curious cattle grazing compete with visitors for the green slopes of Colley Hill. The North Downs Way along the summit of the downs was once used by drovers herding animals to market. 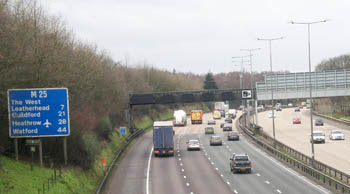 The M25 and M20 motorways run across the North Downs east/west in Surrey and Kent providing an important road artery for heavy traffic leaving the downland roads tranquil and coping only with local traffic. The M25 links London's Gatwick and Heathrow airports. 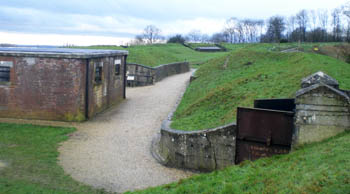 Twelve historic forts are sited along the crest of the North Downs. These were constructed in the 1890s to protect London from foreign invasion. They are located at Farningham, Halstead, Westerham, Woldingham, Fosterdown, Merstham, Reigate, Betchworth, Box Hill, Denbies, Pewley Hill and Henley Grove. Some but not all are accessible to the public. 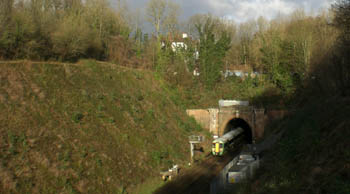 At Merstham the main north-south railway line runs through a deep cutting before going underground. It roughly follows the course of the earlier iron plateway line from Croydon to the Merstham mines. 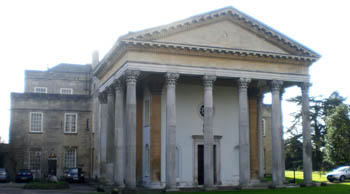 There are many Stately Homes and Parks on the North Downs. Gatton Park is now a private school, others have found alternative roles. Tadworth Court for example is now a hospital for children. 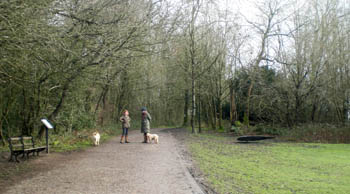 The aircraft wing shaped seat on the right commemorates the circumstances that gave rise to this clearing on the North Downs Way. In March 1945 a US. B17 G Flying Fortress crashed here killing all 9 of the crew. 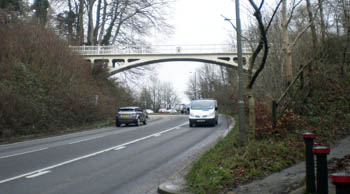 Passing through the North Downs, a network of north-south roads connect London to the South East. In the picture the North Downs Way crosses the A217 at the top of Reigate Hill, separating ramblers from the traffic. 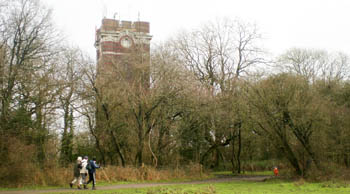 The North Downs has may surprises for visitors. Here a group of serious ramblers stride past Colley Hill Water Tower. Built in 1911, it replaced the Tadworth Water Tower for local water supply. Now redundant it houses radio masts. 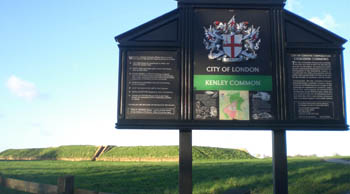 Kenley airfield is one of many freedom to roam open spaces for the public. Once a wartime airfield it is still actively used by aircraft enthusiasts occasionally. 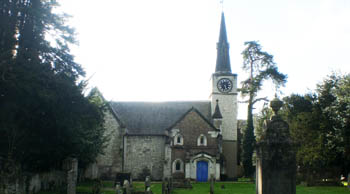 Gatton Church is built from local Merstham or Reigate stone. Underlying the chalk hills are miles of mine tunnels used for many centuries to obtain the Upper Greensand stone. It was the nearest source of building stone for London after the Great Fire of 1666. 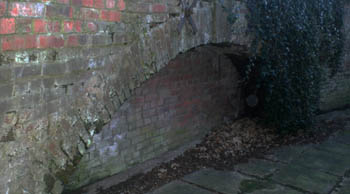 The North Downs has many hidden treasures to discover. Believed to be the oldest railway bridge in the world, this arch is alongside the Starbucks at the northern end of the M23. It once bridged the extension to the Surrey Iron Railway, a plateway used to ship local stone between 1805 and 1843. 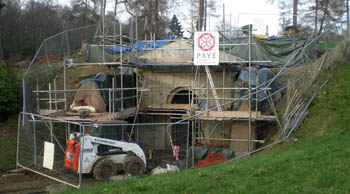 In July 2015 Mole Valley District Council (MVDC) announced their plans for a two year complete restoration of the ruinous and forgotten Deepdene estate, making it a public gardens and recreation area. The estate lies at the foot of the downs at Dorking. 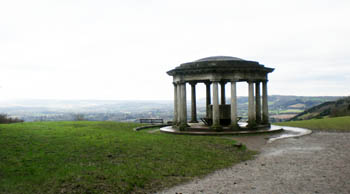 The grandeur of the North Downs can be appreciated from the Inglis Memorial near Reigate Hill. Built in 1909 it was once a watering facility for horses. Now it is a viewpoint for visitors. 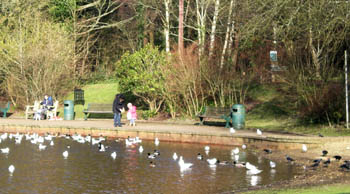 Wildlife abounds on the downs. Feeding the ducks and gulls at the pond at Walton on the Hill, one of several attractive villages located high on the North Downs. 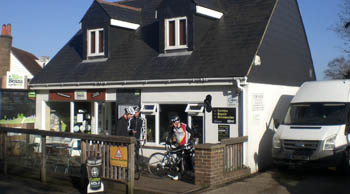 Cycling is a popular activity and where better to start than the Bike Beans Cycle Cafe at Ashtead. Here bike shop combines with cafeteria to service both bike and rider. In 2012 Box Hill became the location for the spectacular Olympic Games road cycle races. 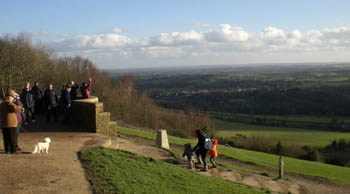 The viewpoint at Box Hill is a popular venue for those wishing to enjoy outdoor recreation. The stunning views to the South Downs National Park are enhanced by facilities provided by the National Trust. 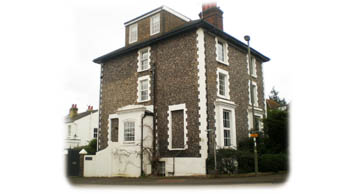 Flint is a natural stone that occurs in chalk. It makes an interesting building stone with distinctive local character, either napped with a smooth dark face or as dug with a mottled white surface. This Victorian building in Epsom is a good example of its utilisation on the North Downs. 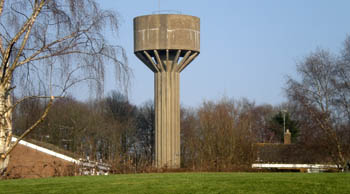 The North Downs uplands has many water towers which benefit as a result of their elevation.  Some are traditional in style and others modern concrete structures. This one near the Trosley Country Park in Kent is now surrounded by modern housing demonstrating that the North Downs is not yet protected from the demand for such residential development. 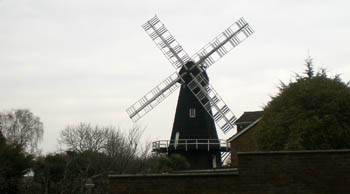 Downland traffic cruising through Meopham in Kent will be confronted with this mill near the village green; one of many on the North Downs preserved from a bygone era. 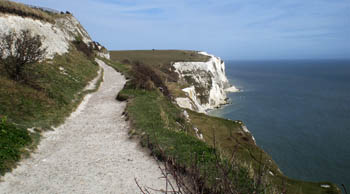 The iconic White Cliffs of Dover, where the North Downs meets the sea - travellers returning to Britain know they are nearly home when they see this quintessentially English landscape.