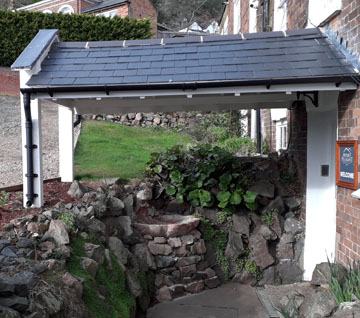 The Mount Pleasant Hotel in Great Malvern has continued with its plan to protect the historic Foley Fountain from further weather damage by building a shelter over it. Having built the protective roof, las

r someone caused major damage, probably by sitting on the basin for a smoke under the new shelter.  We can now report that the shelter has been finished and the broken basin restored with a Malvern stone plinth built beneath it. Now further effort is going into restoring the fountain head spout. Do go and have a look in the grounds of the Mount Pleasant Hotel. Our thanks to AJ., Catherine James and all who have worked to save this Malvern treasure rather than just criticise its location and weather torn state. We also thank the anonymous funders for their contribution to this vital work. More details to follow.

One of our Friends visited the Council Offices recently and sent us her comments which we have edited as follows:

"I visited the artefacts today at Malvern Hills District Council (MHDC) where I met a nice lady, Nicola. I said I would specifically like to see the Ohio wall hanging and I am pleased to say that she brought it with her. Must have read my thoughts as she then made room for it in the Malverns artefacts cabinet., where it now resides! 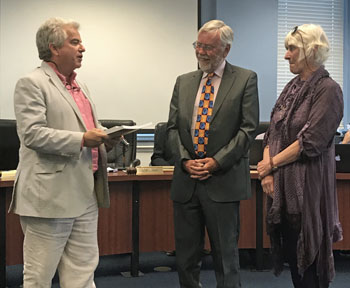 With the ever-growing collection of Malvern material from across the world, the cabinet does not do justice to its amazing contents. For example, there are several items piled up on top of each other.

She said that visitors can come and look at the contents of the cabinet by appointment and that on the open day each year they unlock it so that visitors can take a look throughout the day. Perhaps I will go back then and will be able to take a better look at some of the books for example, which interested me.

We discussed the fact that the cabinet is really too small (she was the first to state this) but she then said that as they are only a "small" Council, they cannot permit themselves to buy a grander one. I felt I should have been putting forward the case to have a bigger one and to show the artefacts off better. Nonetheless, I appreciated Nicola's efforts to make me welcome."

Our thanks go to MHDC for displaying these souvenirs from other Malverns and in particular Nicola for her hospitality. This visit prompts the question - can we help secure a larger display cabinet for the display? We welcome any participation in this debate from readers.

In the picture above Cora and Bruce exchange gifts with the Senator of Pennsylvania during a visit to their Malvern. Such gifts of Friendship end up in the cabinet at MHDC.

New Insights into Saint Werstan's and Aldwyn's Founding of Malvern

We continue with our review of the relationship between the interrupted English monarchy and the founding of a religious order in Malvern, based on re-interpretations of the Bayeux Tapestry and Norman historical accounts. This follows part one in our previous newsletter with Harold crowned King. 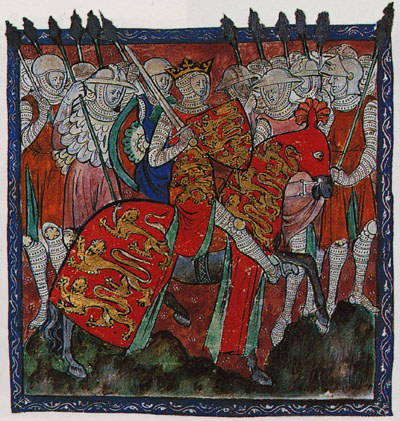 Picture right: William leads his army into England with his leading nobles.

In 1064, Edward the Confessor had directed his right-hand-man Harold Godwinson to visit Duke William of Normandy in France.  Scene 15 of the Bayeux Tapestry shows him meeting William and joining him on a military expedition to Brittany. Before returning to England, Harold supposedly reached agreement that William would be successor to the English throne. Despite this, the day after Edward the Confessor's death in January 1066, Harold Godwinson was crowned king of England.

The Confessor had a direct lineage to Richard I of Normandy, as did William, Duke of Normandy, who therefore had a stronger claim than Harold to the English throne. As a result, in 1066, Duke William invaded England, King Harold was slain, the duke was crowned William I of England and the rest is history.

Odo, bishop of Bayeux and William's half-brother, was a principal accomplice in the invasion of England, rendering it a Christian Crusade as well as a battle for power. After the invasion, Odo acted as one of William's two principal viceroys in England. The other was William Fitz 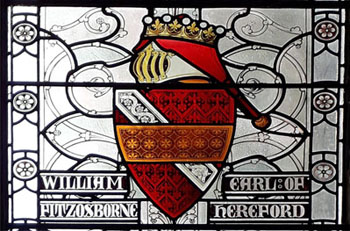 Osbern, who also had participated in the Norman invasion. This all happened at a time when Aldwyn was endeavouring to strengthen the small religious community in Malvern originally founded by Werstan. Unfortunately, Aldwyn, Werstan's successor, was still beleaguered by unpacified Welsh marauders who, in the 1050s, had assassinated Werstan. Wales at that time had degenerated into a series of rebellious states with local princes seeking to enhance their regional powers.

William I's new earl of Hereford, Wiiliam Fitz Osbern, built a series of castles to keep out the Welsh and, through bloodshed and negotiation, he secured a better working relationship. The Norman policy was of pacification of conquered communities with a combination of aggression, inter-marriage and religion, Christianity particularly created an ethos of submission, obedience and accountability to God as a means of community management. This meant that William I maintained his support for ventures like establishing a stronger religious community in Malvern. Malvern was at last secure and following aid from local gentry in the 1080s, saw the creation of the impressive Norman priory. The first prior of Malvern, Aldwyn, had architectural skills and supervised the construction which survives as the core of the building we see today in Great Malvern. Today Malverns Worldwide is the outcome of Werstan's martyrdom and the disrupted English monarchy.

Picture above - Hereford Castle, one of many built by William Fitz Osbern to protect the border with Wales. Now obliterated. The above is only the tempter for what is to come. Research into this medieval relationship between the monarchy, aristocracy and the founding of Great

Malvern is continuing. This includes unearthing new and somewhat startling facts that we have discovered and the implications for Malverns throughout the world. We will keep you posted with regard to progress and look forward to revealing the full story.

To find out more about William Fitz Osbern (Osborn) click the panel right.

A Friend was recently in town on a Sunday and spotted several people wandering into the old Bottling Works courtyard and stopping to look at the water feature there. Being rather curious, our Friend followed them and enquired what their interest was. The party was divided into two - three were from Northampton and two from approximately 100 miles north of New York. The gentleman second from the right was born and raised in Cradley and had come back to see his old haunts. The group had heard about Malvern's famous springs and wells and had decided to find them all. That was a hard task, with the TIC unable to help, being closed on Sundays, when the town receives so many visitors. The man of Cradley explained how, as a child in the 1960s, all his household's water had been drawn from a well in the garden. To which one of the ladies commented in surprise that he appeared to be quite normal.

The mound of debris at the foot of the spring, caused by a collapse of the Triassic sandstone some weeks ago, is still there and caught the eyes of our visitors. It was such an opportunity to talk about the odd geology along Belle Vue Terrace.

Late last year, one of the Civic Society town guides mentioned that the brass St Werstan award, which hangs high on the wall above the Bottling Works Spring, was partially obscured by a shelf, so it was difficult to see the detail. The shelf has gone, and the plaque once more visible, though it could do with a bit of a clean. Any volunteers?

Like many people who grow up in a country town, after graduating from high school, Mary Beth Costello couldn't get out of Malvern fast enough. She was convinced that nothing ever happened in Malvern and never would. 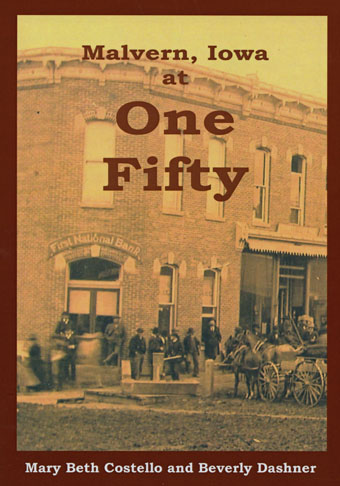 Years later she started to appreciate how her upbringing had such a dramatic effect on who she subsequently became. Mary Beth Costello started researching the four generations of her family that lived in Malvern. As her interest grew, so did her research. More stories of Malvern's historic past came to light, enough to fill a book. What became clear was that Mary was going to need some help, if a book was going to be ready for Malvern's sesquicentennial (150th) year.

Mary's good friend and fellow Malvern historian, Beverly Dashner, had been working with her in the archive department at the Malvern Public Library for several years. They decided that the writing of this book was a task that they could accomplish together. Completing the research for the book resulted in a much greater appreciation of Mary's hometown.

Now when Mary drives through the business district, she is reminded that nearly every section of the two blocks of Main Street burned down at one time or another. Passing by the present car wash, she envisions the large implement dealership, owned and operated by William Wortz and her great-grandfather Bushnell. At the Mills County Fairgrounds, Mary visualises the early aviatrix, Ruth Law. She's flying her plane above the auto track racing champion George Clark.

As a result of research, many insights into Malvern Iowa's past had been rediscovered, So in 2019 Mary and Beverley produced 'Malvern Iowa at One Fifty' as an information source and record for most of the important happenings in Malvern's history. With 256 printed pages and pictures with hard back cover, it provides a unique insight into the evolution of Malvern Iowa. This is all summarised in a timeline starting in 1832 when the local native American tribes were forced to leave their homeland.  As the authors say: 'without a doubt we have missed something or gotten something 'not quite right,' but please remember that we are human, and this is a labour of love'.

Due to the current Coronavirus outbreak we are sorry to learn that this popular event planned from Saturday 2 May to Sunday 10 May is cancelled.  Located across the Malvern Hills and the historic town of Great Malvern, in 2019 we saw 60 wells, springs and spouts decorated, supported by a range of activities and entertainment. 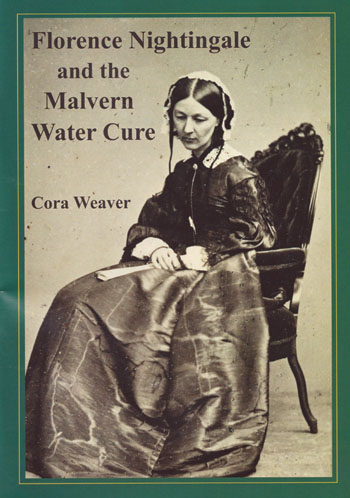 This year is the 100th anniversary of Florence Nightingale's birth. She visited Malvern and celebration of this will hopefully in due course include conducted tours around the town by Cora Weaver and a talk by Dr John Harcup about her life, illnesses and her connections to Great Malvern and The Water Cure.

Florence Nightingale was one of the pioneers of modern nursing and health care. In particular hand washing was something she advocated to reduce the spread of infection. It is ironic therefore that similar recommendations for hygiene and sanitation are being made today in connection with the control of the Coronavirus. St Thomas's Hospital in Central London includes the Florence Nightingale Museum.