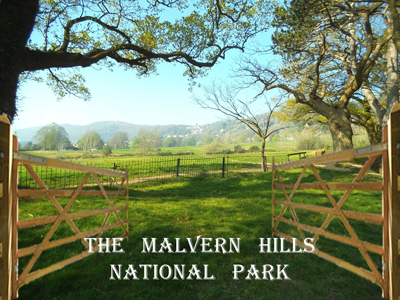 'Our next speaker, Dr Bruce Osborne, was once an academic at Worcester University, and although he officially lives in Surrey, spends half his life here in Worcestershire so is very familiar with the county.

In the 1990s he was involved in pre-recognition research through the University of Sussex into the possibility of creating a South Downs National Park. That dream came true in 2011. Now Bruce has turned his attention to the Malvern Hills. Let's discover more.'

Although not named a National Park, the Malvern Hills could arguably be called Britain's first National Park having been established with its own statutory administrative body and countryside protection initially under an Act of Parliament of 1884 with subsequent amendments. At a time when we are all concerned about environmental issues, urbanisation and conservation of the countryside, should we now reconsider the original status of the Malvern Hills to ascertain whether true National Park status should be applied to advantage?

(left  - Click the University of Sussex Armorial to read the Malvern Hills case study in the Sussex Downs Tourism study.)

But is this sufficient to ward of what could become a long-term catastrophic outcome for Worcestershire? As a result of previous legislation, we have seen the Malvern Hills protected for over 100 years but rather like a picture in a frame. The two are complimentary to the overall impression. Similarly, the areas surrounding the Malvern Hills are now under pressure from urbanism and this potentially threatens the the Malvern Hills experience which encompasses the surrounding landscape. 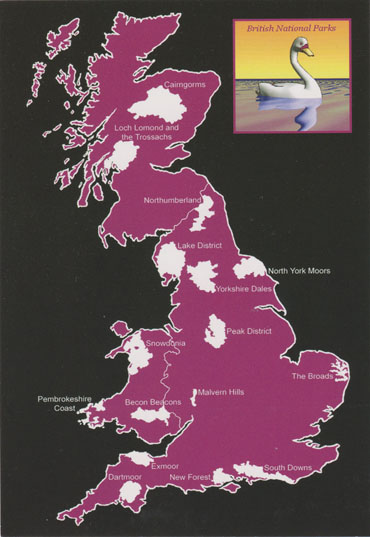 Picture right - British National Parks but including the Malvern Hills.

If the Malvern Hills are acknowledged as Britain's original National Park should formal regional designation be pursued? If so, this opens the possibility of inclusion of the Teme Valley to the north, from the confluence with the River Severn to Tenbury Wells in the west.  Much of this area is designated great landscape value (AGLV). It is noted not only for its archetypal English countryside appearance but also its distinct geology. The designation area would also include much of the Abberley and Malvern Hills Geopark area in addition to the Malvern Hills themselves which are already and would remain under protected ownership status.

This presentation proposes new measures to enhance the conservation of the Malvern Hills and their surrounding rural landscape. It will be achieved by co-coordinating, and thus strengthening, the existing landscape conservation measures that are currently dispersed across several authorities and organizations. These include the Malvern Hills Trust, Area of Outstanding Natural Beauty designation, National Trust, etc. It is proposed that this objective be achieved by conferring the region at large with National Park status. 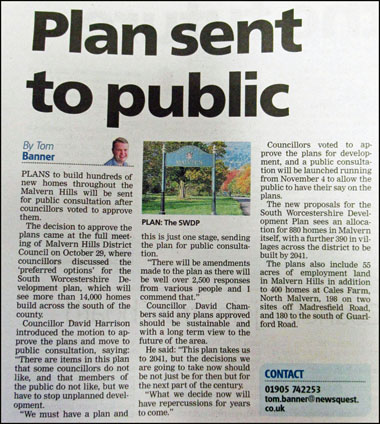 Picture left - editorial from the Malvern Gazette Autumn 2019 setting out massive urbanisation plans for the surroundings of the Malvern Hills.

Concern is being expressed about various issues as summarised below:

a)  a) The obligation of approximately 12,000 local ratepayers to fund the Malvern Hills Trust through a precept on their Council Tax. This is limiting the funding for the Trust and is despite these ratepayers not enjoying any unique benefits such as commoners' rights. The problem is exacerbated by the burden on these taxpayers increasing each year: The Malvern Hills Act 1995 p2 para (5) stated that the years preceding that Act had seen an increase in the land owned by the Malvern Hills Conservators and an increase in the number of visitors from around the country.

b)  To resolve the conflict between regional landscape conservation and the need for housing manifestedby the building of extensive housing estates and associated built infrastructure on green field sites around the Malvern Hills.

c)  To ensure that permitted economic development is sympathetic to the requirements of conserving the hills and surrounding countryside.

d)  The problem of easements across MHT land enabling development on green field sites. In particular if the MHT possibly consider it in their financial interest to grant such easements.

e)  The problem of the MHT having to spend a considerable portion of their income on legal issues in order to merely maintain the status quo with regard to managing their land, which comprises the hills themselves but not the surrounding landscape. 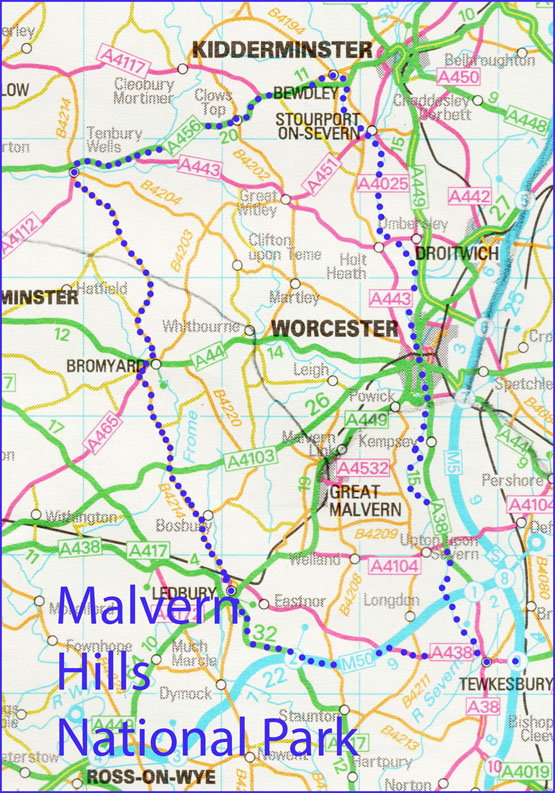 Above - the proposed boundaries of the National Park showing the gateway towns.

It is proposed to achieve this objective by conferring with National Park status an area extending from the B4214 (Ledbury to Tenbury Wells) to the west; the River Severn to the east; the A4117 / A456 Tenbury Wells to Bewdley) to the north and the A417 / M50 / A38 (Ledbury to Tewkesbury).  This will mean that the Gateway Towns to the National Park would include Bewdley, Stourport, Droitwich, Upton Upon Severn, Tewkesbury, Ledbury, Bromyard and Tenbury Wells.

Stage one is to verify the region to which the new measures will apply. Although the MHT owns and manages the core area of the Malvern Hills, the National Trust also owns and manages a considerable area. In addition, much of the locality is designated Area of Outstanding Natural Beauty (AONB). This is the second highest level of protection in the UK after National Park. In the north, it is suggested that the region under consideration includes the Teme Valley. This is extended southwards to encompass the Abberley Hills and the Malvern Hills. Much of this region is already under the authority of Malvern Hills District Council (MHDC).

Stage Two is to identify all the key agencies and organisations that have a significant role in the region as these will need to be represented on any management authority. In addition, significant organisations that have a role in rural tourism will also need to be included, as well as bodies representing the general public, notably district, county and parish councils.

Stage Three will be the consultation with national bodies to direct and support the progress of the final proposals through to legislation and national funding. This will necessarily involve parliamentary participation as well as leadership from the Countryside Agency, now evolved into Natural England, the non-departmental public body in the United Kingdom sponsored by the Department for Environmental, Food and Rural Affairs. This latter body's involvement would include discussion regarding implications for the farming community.

It is anticipated that UK National Park legislation will be customised to suit local conditions and that a specific Act of Parliament will be passed that will be appropriate to the Malvern Hills region. The process will be long and slow; it may take a year merely to delineate and agree on the boundaries of a Malvern Hills National Park. During the consultation period, entrepreneurs will almost certainly attempt to secure last minute development opportunities before the Act of Parliament is passed, as happened during the consultation period for the South Downs National Park.

A National Park Authority (NPA) will need to be established to manage the new National Park. This might be achieved by initially setting up a Malvern Hills Conservation Boardthat would eventually evolve into the NPA. All key relevant organisations would be represented on the board. When the NPA becomes operational, it would have a major role in planning and coordinating the requirements of all the land owners and relevant operators within the National Park. In addition to managing the rural environment, it would hold a responsibility for rural tourism thereby generating new visitor initiatives.

National Park legislation offers customised environmental control over a delineated region. It enables existing landowners and organisations to function within the region but with the necessity of complying with the National Park requirements. It does not jeopardise economic activity; it channels economic development to be sympathetic to the National Park status, for example by encouraging rural tourism.

A Malvern Hills National Park would address all of the issues listed under Background (see above) and at the same time provide comprehensive twenty-first- century conservation protection for not only the Malvern Hills but the whole of the area delineated as the National Park.

Having considered the methodology let us now list the perceived benefits:

To curtail the relentless urbanisation of the uplands and surrounding landscape of Worcestershire.

It will offset the impact of industrialisation elsewhere in the West Midlands including Worcester and Droitwich.

It will provide a readily accessible, green, healthy, recreational breathing space for the populace of Worcestershire and the Midlands, extending that which is already established piecemeal.

Visitor experience is high on the agenda and therefore a National Park is an economic generator.

The blanket coverage coordinates many local and regional countryside initiatives under one authority.

It extends protection of the rural heritage that earlier generations fought hard for, including such scenic areas as the Teme Valley and Abberley Hills.

The location of a National Park Headquarters, Heritage and Visitor centre in Great Malvern in the future would considerably enhance the appeal of the town to tourists and as such provide a focus for related economic development through tourism in the 21st century. 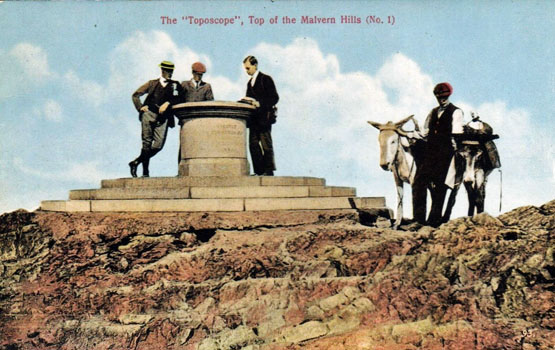 Let us ensure that the sun continues to shine on this legendary locality for centuries to come. The picture above illustrates that the Malvern Hills experience is not only the hills themselves but also, like a picture in a frame, the surrounding landscape. The 1897 toposcope view point on the top of Worcester Beacon has become an iconic symbol for the protection of the hills and surrounding countryside.

CLICK THE PANEL BELOW TO DISCOVER THE NATIONAL PARK GATEWAY TOWNS:

On 29 November 2019 the Malvern Gazette front page news was as below. This followed a national press announcement in The Guardian a few days earlier. 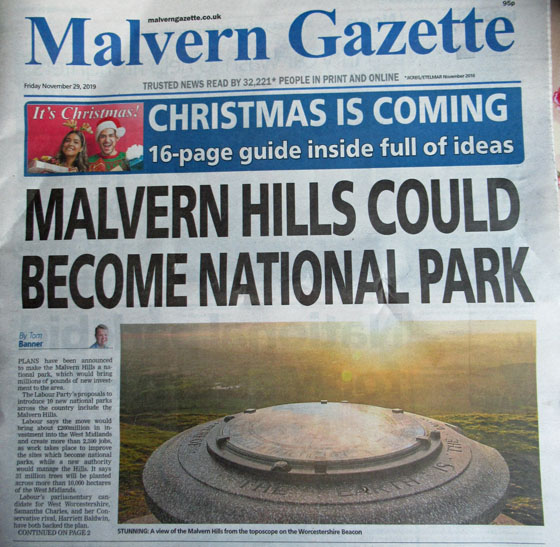 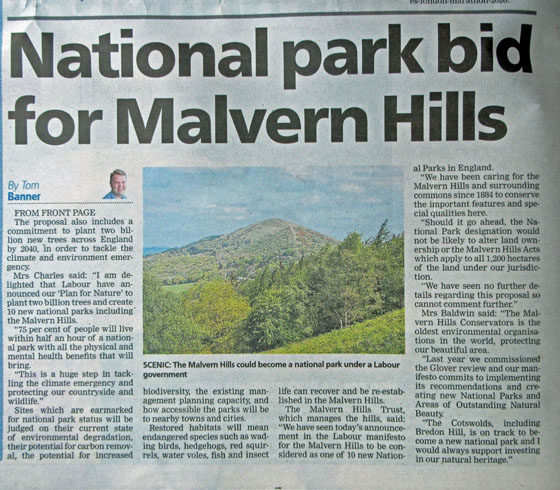 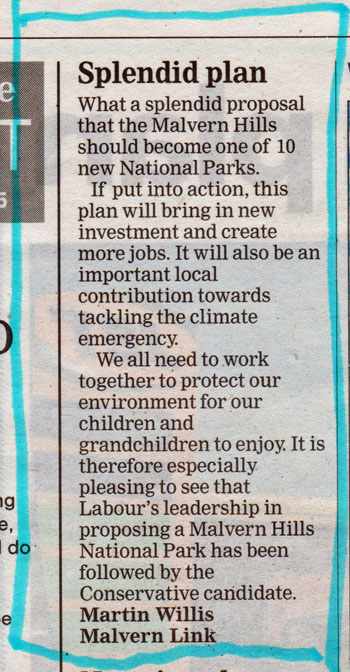