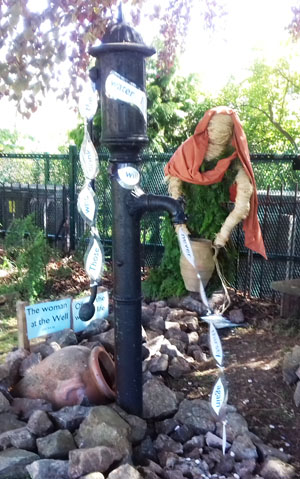 Location: St Andrews Churchyard at Poolbrook, Barnards Green.
Description: An iron pump in the corner of the churchyard, now dry.

This iron pump was manufactured by Joseph Evans of Wolverhampton, a well established company founded in 1810. It is believed to date from the 1880s when the Chances Memorial Chapel was built on the site. It subsequently became St Andrews Church and is still used for worship and social activities. The chapel had an extension built in 2009 and the pump can clearly be seen in photographs taken at the time.

The Founder's prize for well-decorating was won by Poolbrook's St Andrew's Church in 2018. The theme, Year of the Woman, was portrayed by a traditional Middle-Eastern, Biblical tableau of a woman drawing water from a well. In front of the figure was a path along which she would pass, a metaphor for the progress of women though history; the long path to emancipation and the vote. Well-decorators Iris and Peter Senior receive the award from Cora Weaver, who initiated Malvern's modern-day well-decorating a quarter of a century previous, in 1993. The award, a cast brass plaque depicting St Werstan, Malvern's patron saint of springs and wells, is sponsored by the Friends of Malvern Springs and Wells.

Originally named after Edward Chance (died 1890), he was a local entrepreneur who ran the Chances Glass Works in Birmingham and later Malvern. He lived at Lawnside, Malvern. This well known business provided glass for the Crystal Palace in South London as well as the Houses of Parliament. Amongst their other products was lighthouses and one is preserved in Adelaide port in South Australia. The following is an extract from our Newsletter 57 of March 2014. The full text is available on-line on this web site, click the Chances panel below left.
The lighthouse was first lit in 1869 and originally stood at the entrance to the Port River near Adelaide. It was prefabricated in England of iron plates and shipped in pieces. The lighthouse and lantern were  restored and re-assembled on its current site in Port Adelaide in 1986. Inspection of the structure reveals that the lighthouse was made in Birmingham by Chance Brothers and Co. who specialised in glass and lighting. They were also the company that supplied the glass for the Great Exhibition in Hyde Park, London in 1851. In all they supplied over 19,000 hand made panes of glass. The Great Exhibition centre piece was the Schweppes Crystal Fountain that we featured in our earleir Newsletter No. 55. It was at the Great Exhibition that bottled Malvern Water was launched by Schweppes; hence the connection with the vintage Adelaide lighthouse. Since then, like the lighthouse, the company of Chance has undergone various metamorphisms and, would you believe it, is now located in Great Malvern next to the Morgan car factory.
The source of water for Chances Pump would have been the water table of the Severn flood plain, fed by water running from the Malvern Hills to the west. The likelyhood is that the pump is over a relatively shallow well, probably about 20 feet deep. It was typical of hand pumps used for domestic supply in the late 19th century and many of the houses in the immediate vicinity are identified as having similar yard pumps on the large scale maps.
Click the Schweppes logo right to discover more about the Crystal Palace and Malverns link with the Great Exhibition. 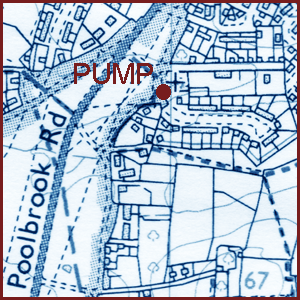 
The map left is based on the OS map. Click on Website below or the top banner to go to the DISCOVERY TRAIL INDEX of springs and wells.