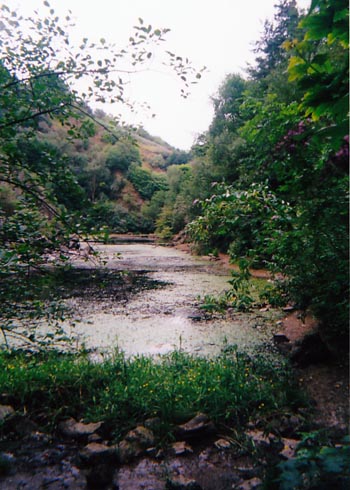 Today this Site of Special Scientific Interest is a secluded haven of wild life but this was not always the case. Earnslaw was one of the last quarries in the Malvern Hills to practice mass removal of stone, although there are indications that it was worked as early as 1836.

In 1932 there was a legal dispute between the operators and the Conservators regarding a major landslip that damaged Conservators land. Damages were awarded.[1] Soon after the quarry was taken over by the Malvern Hills Granite Company in 1934 and operated as a substantial concern until 1969. It was then declared worked out, coinciding with the conservationist lobby successfully bringing to an end all quarrying of the Malvern Hills.[2] The County Council bought the site and leased it to the Conservators who took great pains to make a car park to the south and improve the appearance of the quarry itself.
The easy access trail leading from Earnslaw car park to the quarry was once the main route to Earnslaw House, which was built c.1875. That was nine years before the Malvern Hills Act (1884) prevented any further building on most parts of the Malvern Hills. The original house was supposedly owned by Alfred Earnslaw and it was Victoria Earnslaw who created a number of ornamental terraces that can still be discerned along the drive to this day. The house was demolished in 1936 to make way for extended quarrying.[3] There is some doubt as to the accuracy of this information as there is no record of an Alfred or Victoria Earnslaw in the census or parish records. The only source known is the Conservators Information Boards, which were written by an outside company.

In 2006 the Malvern Hills Conservators repaired and reopened the path around the water's edge following erosion of the banks. The path is often flooded after high rainfall and can be precarious but if you follow it carefully to the far end of the quarry you can discover the spring on a raised terrace. 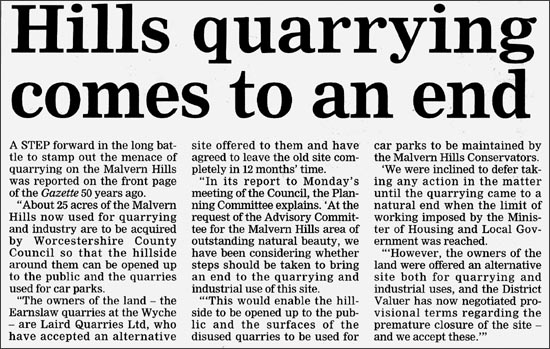 1. The view from the spring looking north.
2. Press editorial in the Malvern Gazette Nov. 2, 2012 detailing the closure 50 years earlier. 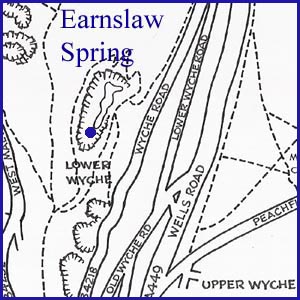 The map alongside is a small section of our more comprehensive map of the area. For the complete map together with a description and history of this site see "Celebrated Springs of the Malvern Hills" (2012).
Click on Website below or the top banner to go to the Site Index.