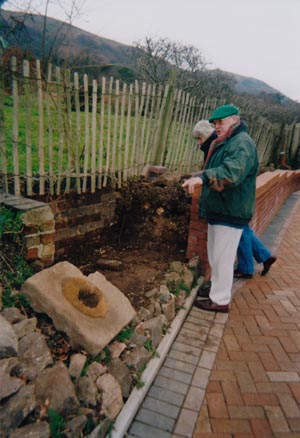 
Location: in the garden of a modern bungalow in St Andrew's Road
Description: archaeology in a garden near a former railway cutting

In May 1864 a new railway line opened between Great Malvern and Tewkesbury. Where the steam trains ran between Malvern Wells Common and St Andrew's Road they passed through a very deep cutting. The cutting has now been filled in, and the ground is level, so it is difficult today to imagine how it used to look.

Straddling the cutting was an aqueduct. It was made of lead; the bottom was approximately 18 inches wide, and the sides about 10 inches deep. Water flowed through the aqueduct from Malvern Wells Common downhill towards the common on Longridge Road. Each end of the aqueduct was at ground level, so it was easy for children to get on to. Which is what they did. In the 1930s one local lady recalls bounding effortlessly across it on many occasions. When an evacuee arrived from Birmingham in 1939, she was dared to cross it. She was scared to venture forth but with much urging from other children she cautiously made her way safely to the other side. With hindsight, it is unanimously agreed that if anyone had fallen onto the railway track beneath they would have been killed. Perhaps to the relief of many, the line closed in1952, the aqueduct dismantled, and the cutting filled in, but some old maps marked 'aqueduct' show its exact location.

In the 1930s and early '40s children used to play on the common on Longridge Road, which was dry and sprinkled with harebells and quaker grasses. Towards the end of the Second World War the common was ploughed up to grow wheat and after that the ecology of the common changed. It changed to a wet, boggy common, alive with bog-cotton and water-iris. This may have had more to do with the dismantling of the aqueduct than the ploughing.

One of the latest discoveries of an unsuspected water feature comes from a local Friend of Malvern Springs and Wells.[1] While exploring the remains of a substantial watercourse flowing through his garden, the owner of a nearby bungalow unearthed a heavy stone slab with an iron inset that looked like the base of a pump. This is believed to have had something to do with the eastern end of the aqueduct, and the watercourse is likely the one that previously had flowed through the aqueduct.

On the other side of the Ledbury-Malvern railway nearby is an enclosure with iron railings. This is a reservoir and may be part of the same water system. There was once a pumping station on the common nearby but in November 1912 the local Council decided to demolish it and sell the materials.[2]

Local Friend of Malvern Springs and Wells displays aqueduct archaeology found in his garden, adjacent to the line of the old railway cutting. 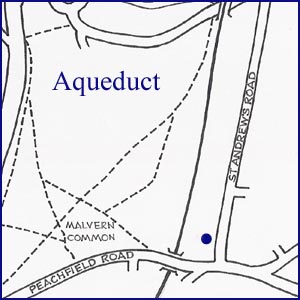 The map alongside is a small section of our more comprehensive map of the area. For the complete map together with a description and history of this site see "Celebrated Springs of the Malvern Hills" (2012).
Click on web site below or the top banner to go to the Site Index.

On Private Property
Not Open To Public
Free Parking Nearby