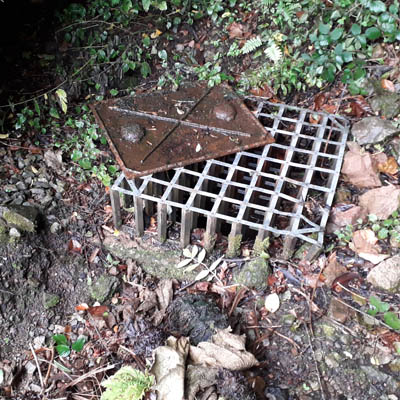 Cottage in the Wood Spout (and Wells House)

Location: the Cottage in the Wood Hotel, Malvern Wells, at the rear of the car park; between the hotel and holiday cottages
Description: a damaged iron pipe about 3-4 metres up the bank

Immediately following the Great War, many large estates in Britain were sold. In the Blackmore Park Estate sale of 14 May 1919, Lot No.107 comprised a cottage, 7.5 acres, and 'fine water from the well in the kitchen garden', all at a rent of 125 pounds p.a. The little cottage became a well-known hotel.

This source is in the grounds of a private hotel but was damaged during car park renovation in 2001. Prior to this is was running to waste. It is probably fed by a tank on the hill above. The installation would benefit from the erection of a new spout and basin.


Wells House - Adjacent to the drive leading to the Cottage in the Wood in Holywell Road is the Wells House. This was once an important water cure establishment.
In 1757 the Wells House was built on the new road to accommodate travellers and those stopping to seek the curative waters at the nearby well. Plans in Hereford Record Office refer to a building showing two separate floors, namely the principle storey front 79 feet 6 inches, and the upstairs chamber story. An estimate for UK pounds 179 plus submitted by Jos. Severn for carpenter's work to build a new house at Malvern near the Wells refers to the principle story and chamber story, and includes a main staircase and two back staircases. An agreement of December 1756 between Thomas Berkeley of Spetchley and Thomas Burchley for delivery of bricks (50,000 at a time) shows that building work was commencing. And in September 1757 an agreement was drawn up between Reginald Lygon and William Warburton for an access road for horses and carriages to be constructed through a piece of Warburton's land called the Cherry Orchard.

This original section is the tall 7-bay brick range to the south, and stables were built at the north end. It was in 1757 that Dr Wall published his analysis of Malvern waters. The combination of local interest and analytical awareness of the waters resulted in further improvements in the locality, because four years later, in 1761, Wells House was improved and reopened. Perhaps this was when the second storey and attics were added to Wells House. The back of Wells House was built on the slopes of the hill and some of the apartments on the third floor opened directly onto the adjoining hills, 'a great desideratum with many invalids'.[1]

A Long Room was added in 1769 where visitors could socialise and dances and other entertainment be laid on. This was probably the 5-bay range below the original building, and measuring approximately a 53 feet frontage. The block between this section and the stables is twentieth century.

In 1781 John Byng stayed at here, along with 25 other visitors and their servants. The weekly charge was 14 shillings with 5 shillings to 7 shillings and sixpence extra for the Red Rooms, thus catering for different pockets. The average weekly wage for an agricultural labourer at that time was about seven shillings and sixpence, so the lodgings were too expensive for some. Dinner was a noisy meal served at 2pm with a hot supper at 9pm. Byng found the room and the bed bad and did not seem enamoured of the company. However he returned in 1784, found only 12 people staying there and upon leaving wrote in his diary "our entertainment was very good and very cheap."

By the beginning of the 19th century the Steers family had the monopoly of lodgings at Holy Well. In 1817 Mr Steers kept Wells House, which by 1825 was run by his widow, while his daughters ran Rock House, a spacious lodging house adjacent to the Holy Well where people stayed if they wanted more privacy.

Wells House was well patronised except in the winter and various facilities were available to the visitors. A regular penny-post operated during the season from 6 May to 6 November; religious services were held there on Sundays and entertainment, including a billiard table, pianos and chess, was provided for evenings and inclement weather.

Lodgings here by the early 19th century consisted of furnished rooms at 8 to 14 shillings per week, and 5 shillings for each servant; candles were 1s 6d extra. Board was 2 guineas per week or 6 shillings a day if staying for a shorter period. Servants' board was 24 shillings and sixpence per week for breakfast dinner and supper. Wine and spirits were included in the price but tea and sugar were extra. Places of this nature were known as 'ordinaries', where there was a fixed charge for board and lodging but 'extraordinaries' - expendable commodities that would become expensive if used profligately so not included in the ordinary price - had to be paid for separately.

Dinner - a table d'hote, or fixed-price meal - was served at the public table in the large dining room or great room, at 3pm. A bell rang at 2.30 to remind everyone of the time and another bell rang at 3pm, when everyone sat down together; no one was allowed to eat in their rooms unless they were ill. The dining room was enlivened with a picture of market at 5am, probably executed by one of Hogarth's pupils, and two other paintings were said to be the work of a gentleman's self-taught servant. There were also various advertisements hanging on the walls, one of which mentioned Ann Farmer, who swept the walks every day in the hope of receiving donations from the visitors.

In 1851 Harriet Martineau, author of Illustrations of Political Economy (1834) and Deerbrook (1839) and some friends visited Malvern Wells and, after walking on the hills entered Wells House through the back door and found themselves on the third storey. To find some friends and take coffee they descended to the upstairs drawing room from where there was a wonderful view. Thus there were two drawing rooms, one on the second floor and presumably one on the first floor. A 19th century engraving of the Wells Boarding and Lodging House shows a delightful three-storey building, the entrance fronted by an elaborate four-columned Doric portico. There was a veranda on the right of the entrance where invalids and other visitors could watch the sun rise and take the fresh air. In the foreground were the formal laid-out gardens that were de rigeur at spas. These gardens were built after 1817 because in that year the view from the front of the House was of hedged enclosures.

Wells House remained a public lodging house until the late 1850s, by which time Great Malvern had become the centre for visitors. In 1859 Dr James Ayerst, a hydropathic and homeopathic doctor, took over Wells House and opened it to his patients, one of whom was Charles Darwin. Dr Ayerst was a great believer in fresh air and sunlight so this elevated situation on the side of the hills would have been ideal. Dr Ayerst retired in 1868 and the lease on the Well House advertised for sale. The building was described as being equipped as a water cure establishment, having forty bedrooms, 5 reception rooms and a billiard room, and containing 50 japanned baths, eight feather beds, eighty mattresses, 120 blankets, 30 counterpanes, linen, 40 iron bedsteads. In 1870 the building reopened as a school for young gentlemen.

In 1904 it was reported that neither Wells House, then a school, nor Holy Well, were on the mains water supply. This demonstrated the reliance on the plentiful supply of water from the Holy Well.[13] 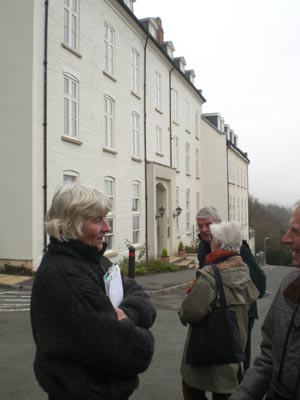 Wells House's function was practical, not aesthetic. It is a modest building yet precedes the hydropathic-associated buildings in Great Malvern by a century. The historical importance of this building is thus established: it is the oldest surviving spa building in the Malverns, which should be sufficient recognition of its importance as part of the Malverns spa heritage.

On a national level, spa buildings survive that predate Wells House, but almost all are pump rooms. Surviving purpose built accommodation is rare: Wells House, the Old Hall at Buxton (built 1570s) and the Star and Cross Keys Inns at Holywell, Flintshire (17th century) are probably the only pre-19th century buildings to survive. The Wells House has been the subject of 21st century development but has yet to open its doors to new custom.

Wells House was restored in 2012 and was considered for the Civic Society 2013 Civic Award for the best renovation. Behind the Wells House lies the Victorian Holy Well Chapel.
Used by water cure patients and the local school, the Chapel was described as follows:
Malvern Advertiser 23 July 1904

The Wells House's new school chapel stands on the hillside north-west of Wells House. It is made of corrugated iron on a brick foundation. The chapel is 40-feet long, 20-feet wide; the height to the eaves on the inside is 9-feet and outside 10-feet. The height to the ridge of the high-pitched roof is 22-feet. The inner walls are of 4" wide red Oregon pine boards and there is a 4-inch air space between this inner wall and the exterior iron wall. The chapel is ventilated by two of Boyle's patent ventilators. Lighting is through two seven-light gas coronas and several side windows. There is a large window in the north gable and a smaller one in the south gable, both with multi-coloured "Cathedral" glass. There is a small, 6-foot square porch with a tiled floor. Schoolboys - members of the carpentry class - have helped to build the chapel and will install the seating. The chapel and its furniture have been paid for by people interested in the school. For example, the brass cross above the communion table was the gift of two old boys and the lectern was the gift of Rev W. Gedge who founded the school in 1870.

For many years derelict, in 2013 it was converted to private accommodation. For before and afterwards pictures and more details see Newsletter 56 on-line by clicking right.. 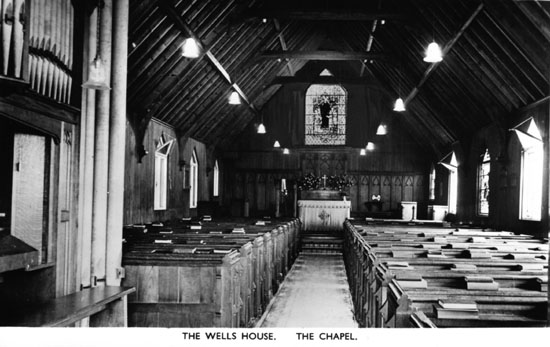 3. The Holy Well Chapel awaiting restoration in 2013.
4. Cora Weaver with members of the Civic Society in 2013 consider the restored Wells House for the annual Civic Awards.
5. The Wells House Chapel Interior, when in use by water cure patients and the local school.
Footnotes:
[1] A Visitor's Guide to Malvern c.1860.

The map below is a small section of our more comprehensive map of the area. For the complete map together with a description and history of this site see "Celebrated Springs of the Malvern Hills" (2012). 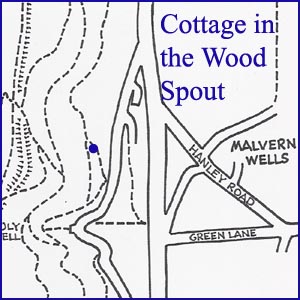 Access On Foot
On Private Property
Accessible All Year