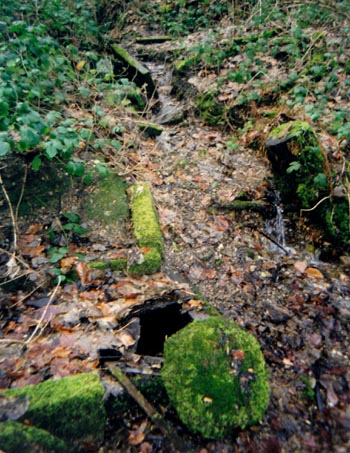 Location: in Tumuli Valley, to the south of Holy Well.
Description: a spring gushing down a narrow valley.

In 1928 Malvern Hills Conservator Mr Allan Bright of Barton Court offered the Conservators a piece of freehold land that he owned in Holywell Road. The land was nearly 4 acres and had a frontage of 373 yards along the Holywell Road. It was situated above spacious Knoll Lodge, the front entrance of which was on Wells Road and the rear entrance on Holywell Road. Acceptance was on condition that the land was kept open for ever for the use of the public and was not built on or quarried. The details of the gift included the fact that, 'There is also a good spring of water which would be handed over with the land'.[1] The terms were agreed and the gift accepted.

The spring emerges in several places high in this forested valley. It flows down to Holywell Road where, on a sharp bend by a gas lamp it runs under the road, through the grounds of Benholme, and emerges on the Wells Road beneath an iron plate at the foot of an embankment. There are two cisterns high in the valley collecting water but apart from that this substantial source is running uninhibited.

Gabions, wire cages filled with rubble, were built across the stream bed during the winter of 1996-7 to check the forces of Nature. Following a hill fire in the early summer of 1996 the vegetation was slow to regenerate, with the result that the hillside was eroded badly during two severe rainstorms in July and August that year. Malvern Hills Conservators were concerned that any further rainstorms might cause severe erosion and damage the premises lower down the hill, so the gabions were installed for protection.[2]

This site is something of a mystery with this 'tongue in cheek' tale that has captured the imagination in recent years and so we repeat it as follows.

Located in Puck's Wood, this lonesome hillside is supposedly named after a mischievous character called Puck or Robin Goodfellow and the Tumuli Valley named after the ancient burial mound on the hill above. Puck is immortalised in Shakespeare's A Midsummer Night's Dream. In English folklore he is a fairy or hobgoblin. Using dancing lights he is reputed to mislead travellers and sometimes assumes an animal form. In ancient times, Robin Goodfellows were believed to be terrestrial devils capable of inciting disease and melancholy, driving the victim to despair, rage and fury. A cure was believed to exist in the Balneum Diaboli or Devil's Bath, to purge the affected mind and body. Its proximity to Holy Well should not go unnoticed....

Anne Bradford, gives more detail about this spring in her book of mysteries. Puck was a mischievous spirit and one of his tricks was to entice travellers off the beaten track. He did this by lighting fires which would be mistaken for habitation in the distance at night. The modern explanation is that this may well have been marsh gas or methane spontaneously combusting.[3] However this explanation was of no consolation to the lost, weary and superstitious traveller finding himself at the mercy of the devils of darkness.

Today the Devil's Well or Bright's Spring runs to waste but has been decorated during the annual well-decorating event. 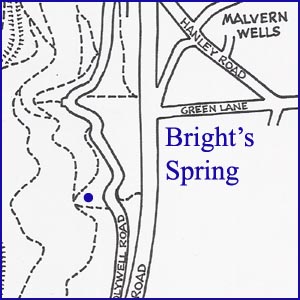