The Gullet Spring, Tank and Quarry

Location: in Gullet Wood, between Midsummer Hill and Swinyard Hill
Description: a spring, stream and tank.

Approach the site from the car park (grid ref. 765382) on Castlemorton Common.

In the 1850s naturalist Edwin Lees remarked how the valley known as Gullet glen 'between the Holly-Bush and Swin-Yard hills, is deeply excavated by a loud-voiced brook, brawling among mossy fragments of rock, and so shadowed by entangled thickets as to realise poetical description without exaggeration.' 'between the Holly-Bush...' And he went on with an unexaggerated poem:

'A winding stream flowed through this verdant valley,
And pleasant music its sweet waters made,
As with some drooping flower it here did dally;
Or lower down, amid the pebbles play'd;
Then brawl'd along through circling mossy ways,
Here lit by straggling beams, there dark with hanging sprays.'

He also talks of a water-worn ravine, the 'Gullet dingle or "The Gullet" where the water breaks out of its very neck, [which] forms a little glen of loveliness...' [1]

To find the Gullet Spring there are still pebbles, moss and dark hanging sprays and a little glen of loveliness to negotiate. From the car park walk westward up the track to Gullet Quarry. Walk round to the opposite side of the quarry and scramble uphill through Gullet Wood, to the right of and parallel with the main footpath. Look round for the stream; follow its course uphill for about 200 metres and you will see an iron tank in the stream bed. This is a leftover from the quarrying industry, which finally ceased in 1971.[2] The tank held about 10,000 litres and provided a head of water for the quarrying operations below. The spring is a short distance above the tank.

Gullet Quarry was once one of Malvern's major quarries. After operations ceased it became a water basin. Reflecting the general climatic change, over the last 10 years the water levels in Gullett Quarry have varied considerably. The depth ranges from about 2 metres where previously it was 5 metres. This has implications for people attempting to dive into the water from a great height. The quarry has been described as an awe inspiring place, but over the years it has claimed the lives of several young men who have dived from the rocky ledge above the pool into its deep and very cold water. In May 2006 the Conservators closed off the vehicle access in the hope that it would enhance the locality and deter those who feel like a swim.[3]


On the 12 July 2013, the Malvern Gazette carried a front page headed "JUST DAYS AFTER A TEENAGER'S DEATH, AND STILL THEY'RE SWIMMING AND TOMBSTONING AT GULLET". The story was of the latest death of a 17 year old in the waters of the quarry lake when swimming there the previous Saturday. Four people have died there in the last two decades. Hours after the death people were again swimming in the quarry in spite of warning notices and the advice of a Conservator's Warden on site. Inevitably this has led to calls for draconian action to save lives by draining the quarry or fencing it off like the local prison. The solution is a difficult one and revolves around the invincibility that young people feel and the dramatic landscape that makes the quarry such a popular feature of the Malvern Hills..

Illustrations:
1. The Gullet Quarry
2. The streamway and tank in Gullet Wood. 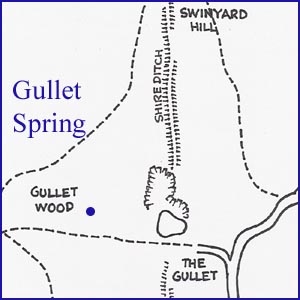