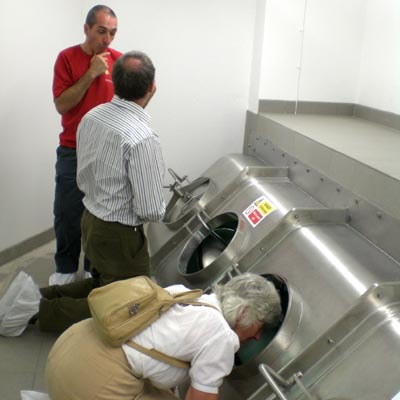 This spring is also known as the Primeswell.

This spring lies in the parish of Colwall and may have been named after Colwall property owner and benefactor Mary Pewtrice. In her will of 15th September 1724 she gave Allfords, a cottage and garden in Evendine Street, to Richard Hill and his heirs for ever on payment of four shillings a year which would be paid to the poor of the parish of Colwall.[1] The charity is lost but the Pewtrice name lives on, although in their enthusiasm to provide entertaining stories for the increasing hordes of visitors to the Malvern Hills, the Victorians decided that it was named after a Roman general named Pewtriss.

The Victorian rector of Pendock, W.S Symonds, created another legend in his Malvern Chase, an account of the Wars of the Roses and the Battle of Tewkesbury, which was first published in 1881. In it he describes how Princess Elizabeth was searching for wild flowers at a place near Winds Point where elm trees rose above a little spring, and where, according to tradition, the visions came to Piers Plowman. William Langland's Vision of Piers Plowman (earliest draft c.1362) is the greatest English medieval poem. Langland had spent some time as a novice monk at Little Malvern Priory, and at the beginning of his masterful poem his mind is by a brook on the Malvern Hills.

Having lived in the area, Langland was probably familiar with the Pewtriss Well, so this may indeed have been the stream with the wide bank where his plowman came to rest.

The Pewtriss Spring consists of three springs issuing within a few feet of each other at 711 feet above sea level. Early in 1928 a group of men from the Malvern Geographical Society went to visit the new excavation at the Pewtriss Spring. The excavation had probably been engineered by Schweppes, who had taken over the springs for bottling the previous year. A report in the local newspaper about the trip was enlightening. It described how the Pewtriss Spring is in a fault, which is a crack in the earth formed by the movement of the rocks on both sides. On the west side of the fault are sedimentary Silurian rocks; on the east are the very ancient igneous rocks known as Malvernian rocks. Faults are rarely seen because they are covered by loose rocks, stones and soil that have fallen from the steep slopes above, but here about 12 feet of this material had been dug out so that the men could see the fault.

Writing in 1930, Richardson stated that the source was by then known as the Pewtriss, Putress, Putriss or Primes Well. "This fine spring issues on the western boundary-fault on the north side of the Ledbury road in Herefordshire a short distance westwards of the British Camp Hotel, and during the shortage of the Public Supply to Malvern in 1903-5 water was pumped from it into the Camp Reservoir. The water runs over a little waterfall and down a gorge, and finally, at a distance of only about 100 yards from its outburst, sinks into the Wenlock Limestone and is lost." By 1935 Richardson had modified his view and was of the opinion that the spring west of Woodland Coppice near Evendine marked on the 6 inch OS map was in fact the piped outfall of the Pewtriss Spring.[3] Richardson also noted that in 1930 the Pewtriss Well had recently been excavated and tanked supplies sent to Schweppes' Works at Colwall Station. [4]

In 1858 the Rev J Webster said that 'Colwall' was derived from the Latin collis valli or valatum. This means the hill of the trench, or entrenched hill, referring to the ditches and ramparts of British Camp, which is so visible from Colwall. From the springs, the water gushed downhill to Colwall, which acording to others is reputed to mean "Cold Well, a place where water rushes out."[5] In 1817 antiquarian John Chambers observed springs rising on the west side of the hills in the parish of Colwall which he identified as the Pewtriss.[6] He said it wasn't as famous as nearby Walm's Well but nevertheless "healed very old ulcers on the legs of a poor fellow, after other applications had been useless; and by many trials upon his hands and the tetters*, Dr B. was persuaded that in long draughts and lasting dry frosts these waters were more effectually and speedily healing than at other times."[7]

If the Pewtriss Spring was ever used medicinally, once its fame as a curative spring had evaporated the water was bottled. For many years during the nineteenth century, Messrs W & J Burrow, who also bottled water on Belle Vue Terrace in Malvern, bottled water at the Pewtriss Well, having acquired a contract in 1897 with the Bright family to take the water. They even managed to bottle during the drought year of 1890 when there was a chronic water shortage. The townsfolk were unhappy and a letter to the local newspaper bemoaned the fact that all round the world people had the luxury of drinking "pure Malvern water while the unfortunate inhabitants are compelled to resort to a costly scheme to supply their daily necessities...The spring at the Warren would doubtless serve for bottling and exporting purposes without the erection of a costly and unsightly reservoir...Surely the Messrs Burrow would be patriotic enough to consider such a proposal.... [8] By that time engineers were already being consulted about providing Great Malvern with a vast and expensive new water supply, to include a 40 million gallon reservoir. (Vast tracts of land in this area were known as the Rabbit Warren and the British Camp reservoir was eventually built on the site of Rabbit Warren Farm.)

About this time, for aesthetic reasons when bottling, the alternative name Primeswell was used. This has caused considerable confusion as there is another Primeswell in the area. It is suspected that it was between 1897 and 1919 that the spring was renamed The Primeswell. The 1919 Malvern Geological Society 1:25,000 map records the spring as The Primeswell, some time before Schweppes took over Burrows. In 1927 Schweppes had acquired W & J Burrow. Initially they took the water by tanker to their Colwall bottling plant but soon contained the spring. The water collected in a basin and then fell over a weir to a second basin. From there it was piped to tiled storage cisterns holding 3,000 gallons and 2,200 gallons then piped two miles downhill to the works at Colwall.

On 15 May 1985 the water was recognised under the 1985 Mineral Waters Regulations as a Natural Mineral Water - just as the regulations came into force. In March 1993, the building and spring containment was demolished and new facilities installed. At the same time the pipeline to the bottling plant was renewed.

For 23 years, from 1987-2010, Coca Cola Enterprises owned and operated the bottling works at Colwall, utilising the Primeswell spring. Using the Schweppes brand, they renamed the product 'Malvern, The Original, English Water'. This identified Malvern, England as the origin of the famous product and the name Malvern was advertised all round the world at no cost to the local people. In 2007 Malvern water was reclassified enabling advanced technology filtration to be incorporated in the production line, thereby supplementing the natural processes of the bedrock purification. 'It is still the original water from the same source, has the same mineral content and the same great taste'.[10] The first consignments were dispatched to a number of famous households in January 2007, perpetuating a loyalty that has been consistent over many years.

In October 2010, the last bottles came off the production line and the spring became redundant.

Illustrations:
1. Rob Stilliard from Colwall Bottling Plant shows the post 1993 containment.
2  The spring when refurbishment of the containment took place in 1993. 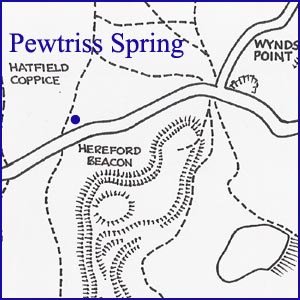