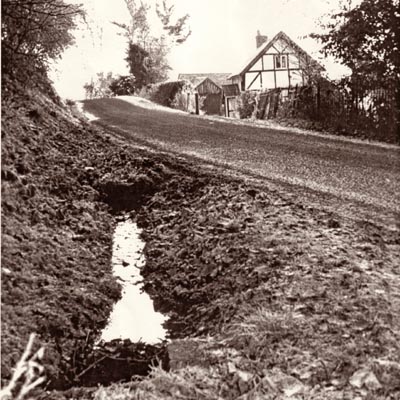 Location: Chase Road, east of Box Cottage on the bend midway between Ballards Spring and Gardiners Common.
Description: a small streamlet running alongside the road and a cistern in the garden of Box Cottage.

This was once an important site for natural spring water in the Malvern Hills and was supposedly renowned for healing.

Sometimes known as Mooralls Well or Pitts Spring this ancient source is situated on the western side of the hills in Colwall parish, directly opposite the Holy Well.[1] It lies to the north of Gardiners Common, 30 feet above Glenwood spring on the eastern side of the road and east of Box Cottage.[2] The spring was a notable landscape feature by 1633 because it appears on the Malvern Chase enclosure map of that year. It was incorporated into a parcel of land measuring 6 acres 2 roods, that Charles I accepted in lieu of his hunting rights and was later acquired by the bishops of Hereford. This is confirmed in a lease, dated 23 October 1793, of lands belonging to the Bishop and leased to John Spencer, yeoman of Mathon: '...also within the Manor of Colwall being likewise parcel of the Possessions of the said Bishoprick one...piece there containing by Estimation Six Acres and Two Roods lying at the More Way Well...And also in Colwall Purlieu...one other piece lying near St Thomas's Well containing by Estimation ten acres and one other piece lying at Primswell's containing by Estimation Six Acres Two Roods and fourteen Perches..'[3] Moorall's Well also appears on the 1838 Tithe Survey Map and the 1840-42 Tithe map of Colwall.


Mooralls Well was renowned for its healing properties and a cottage near the well once provided a brick-lined bath. In his 1796 first edition of Description of Malvern, Rev J. Barrett of Colwall wrote that 'Moorarls Well' had proved beneficial in scrofulous cases and a bath had been built near the spring for people to bathe in. In his second edition, in 1803, he didn't mention Moorarls Well at all. John Chambers in 1817 wrote that the bath had been filled in but there were plans to restore it to its original state for the use of the public. The plans were never implemented [4].

There are several outfalls of water from the locality and Richardson (1935) suggests that there is more than one spring. On the eastern side of the road is a gully along which the water flows before diverting to the other side of the road. Along the eastern road bank is a collapse of earth suggesting subterranean activity, possibly indicating the exact location of the spring. All this land, including Box Cottage on the western side of the road, was bought by Stephen Ballard I from Benjamin Bright of Barton Court in 1870/71 (now the property of Stephen Ballard III). By the late nineteenth century Pitts Spring had been harnessed to provide water to the Quarry, the Winnings and the Court.[6]

Adjacent to Box Cottage is a covered cistern which overflows through an iron pipe. This water, together with that from Ballards Spring, formerly provided the Ballard family's extensive supplies to Colwall (see Ballards and Original Primeswell). At that time the issue was 5 gallons per minute but in 1992 the rate had dropped to 2 gpm.

In the 1880s, though abandoned, the well still retained a reputation for curing eye disease.[5] The water emerges from the same east-west fault as the Holy Well and the Eye Well, which may explain its efficacy. The decline of the facility is detailed in the following testimony of 1877 outlining reasons for the demise and neglectful condition of Malvern's water sources:

"Malvern, renowned as it is all the world over for its matchlessly pure water kept itself innocent , up to a few years back, of any exhibition of special gratitude for the priceless favour thus conferred upon it. Malvern people...never let their feelings get the better of them, never permit themselves to be carried away by flights of fancy or silly sentiment, never look at anything except what is just before their noses. If they are anything they are practical, and not very much of that. Hence it is that the very site of Moorall's Well near to British Camp, which a couple of centuries ago was like the Pool of Bethesda by reason of the number of sick people brought to lie on its margin is almost utterly forgotten whereas had the people of Knaresborough or Harrogate possessed such a well they would have made a fortune out of it. Walm's Well, is in the same vicinity, though it has lost none of its ancient properties, is allowed to sink into oblivion, whereas the people of Cheltenham would have built a splendid Pump Room over it. The Holy Well and St.Ann's Well, anywhere but Malvern would be made excuses for erecting edifices above them, which would contain within them sources of pastime and pleasure which would defy wind and weather; the Hay Well, situate in the centre of the town, might have become the central attraction of the town had the same spirit actuated Malvernians that actuate the people of other watering places, and the beautiful spring at Cowleigh, were a Cavendish its proprietor, would be so conducted under an imposing and artistic canopy, that it would become a favourite lounging place for visitors, and another item of interest in the lovely expanse of Cowleigh Park."[7]

St Moorall was supposedly an early Anglo-Saxon hermit who performed baptisms at the well. May quotes McKay in the 1880s: "Moorall and Walm, the Silurian Missionaries to Dyn Wawr, the great city of the Holly Bush Ravine, and to the Romans and Celts contained in the fastnesses of the British Camp or the Herefordshire Beacon." This quotation suggests that these two missionaries were considered of importance both to the residents of Dyn Wawr and the garrison at British Camp. McKay in 1875 compares Walm's Well and Moorall's Well - "Moorall's Well, which, though less well known now, was formerly similarly celebrated."[8] Untunately such romanticism was ill founded. Originally known as More Way Well it was the Victorians who contrived the legend. 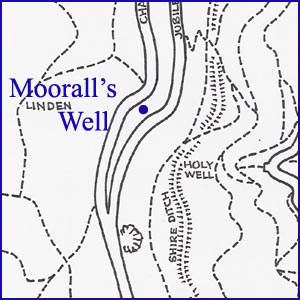