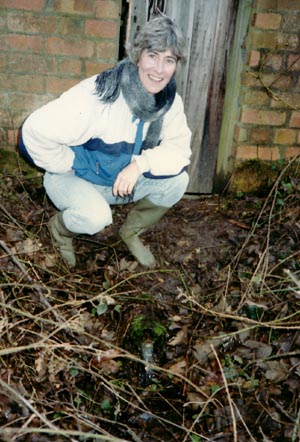 Location: Chase Road, behind a short stretch of brick wall on the right heading south .
Description: a spring contained in a cistern within a shed.

This source is on the Ballard family's private property. It is usually known as Ballard's Spring but also as the Glenwood Spring, although Glenwood House is about 150 yards north of the spring. Richardson notes two springs 150 years apart and these are discussed under 'Original Primeswell' (48).

The cistern into which the spring emerges is covered by a brick-built shed that is normally locked. The cistern overflows into a west-flowing brook. The estimated output of the spring is 10 - 16 gallons per minute, depending on rainfall.

Uses of the Water - The extensive Ballard lands, including this spring, were bought by Stephen Ballard I (1804-1890). Bottling was originally carried out in a small shed on a piece of levelled ground just below the source. From 1883 - 1914 the spring supplied Ballard's Vinegar Brewery in Colwall and the vinegar won silver medals at the Trade Shows in Paris in 1889 and Edinburgh in 1990. The British Trade Journal noted that "...the vinegar itself is guaranteed to be purely of malt, the brewery being supplied exclusively with the celebrated Malvern water, whose qualities are world-renowned."[1] The Vinegar Brewery was sold in 1914 and became a cannery, which closed in the 1960s.

In 1890 Ballard entered into an agreement with Schweppes to supply water to their new Colwall bottling plant. The cost to Schweppes was 220 pounds per annum for 21 years, and they bottled at the Vinegar Brewery for eighteen months before their new Colwall buildings were completed. The contract with Stephen Ballard assured a prolific supply from his Glenwood spring and legend has it that the 87 pounds 10 shillings due for the temporary Vinegar Works facility is still outstanding. Schweppes' bottled water was known and marketed as Glenwood Spring at this time. Circa 1925 the Glenwood spring became polluted and Schweppes were having their bottled water returned. George Ballard (he inherited from Stephen Ballard) ran a main from Moorall's Well or Pitts Spring to Schweppes but by them Schweppes had negotiated the purchase of W & J Burrow and acquired, from Alan Bright of Barton Court, the rights to water from the Pewtriss Spring, which they used until closing the Colwall bottling plant in 2010.  They renamed the Pewtriss Spring the Primeswell. 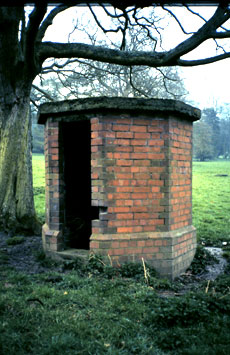 Ballard's spring was - and is still - used for the family's private water undertaking and is mentioned by Richardson in 1930.[2] It fed Winnings and other houses owned by Ballards in Colwall. This source and Mooralls Well provided a private water supply to about 130 houses, though this number has been substantially reduced in recent years. The two sources could be connected through the pipework, although each essentially had its own distribution network. There is a most interesting valve chamber related to the private supplies in the field just east of the western end railway tunnel portal. It is a red brick hexagonal building now rapidly deteriorating.

In 1948 Ballards ran water and sewer services to The Beacon Cafe on the Worcestershire Beacon, though the Cafe was derelict at the time.

The chemical analysis of the water taken by Schweppes in 1890, supplied from the Ballard family archives, included the following comment:


"It was an extraordinary specimen of fine soft water and it closely resembled distilled water".
Geo. Browner F.R.S. [3]

The Ballard Family - A long-established Colwall family, the Ballards have been frequently involved in local activities. A John Ballard was vicar of Malvern between 1644 and 1653 and in 1802 the Ballard family subscribed to C H Tatham's restoration scheme at Malvern Priory. Philip Ballard is listed as an attorney in the 1820 County Directory and later in the nineteenth century the brickmaker Robert Ballard, brother of Stephen Ballard I, between them built the spectacular Ledbury viaduct.

The most famous member of the family was Stephen Ballard I, born in 1804 at Pickersleigh Court 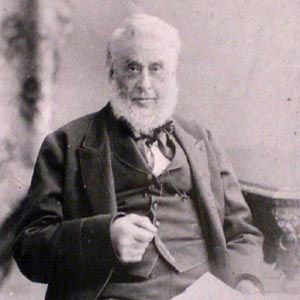 and later resident at Winnings in Colwall. He started his career as a drainage engineer but subsequently gained railway experience working with Brassey, one of the foremost engineers of the day and the engineer on the local line. Ballard was responsible for the opening of both of the railway tunnels on the Hereford to Malvern railway, one at Ledbury and the other through the Malvern Hills. They were 1,323 yards and 1,567 yards long respectively and were considerable engineering feats in their day. The line was opened to traffic in 1861 although the Malvern Tunnel was subsequently replaced (See Railway Station Fountain and Railway Tunnel). In 1887, the year of the Queen's Golden Jubilee, Ballard engineered the Jubilee Drive from the Wyche to Gardiner's Common. The first Malvern Hills Act was passed in 1884 in an attempt to overcome the problem of encroachment on the common and Stephen Ballard I was one of the principal landowners whose cooperation enabled the Commons Society to secure the legislation. Ballard died in 1890 at the age of 86 and his grave and monument lie above Broadwood House in Broadwood Drive near the circular shaft vent of the railway tunnel. The inscription on the monument reads:

Illustrations:
1. Outside the shed that contains a cistern in the 1990s, the overflow can be seen below Cora.
2. The spring containment shed now overgrown.
3. The valve chamber.
4. Stephen Ballard I. (courtesy Malvern Museum) 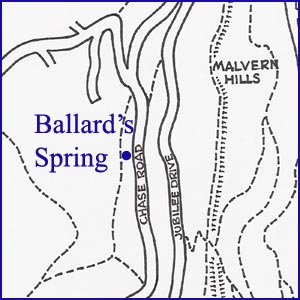