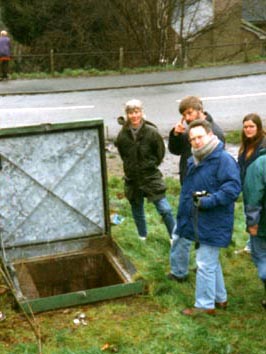 Location: on the left of West Malvern Road heading south; by a car park and bus stop just before Harcourt Road.
Description: several springs contained for public supply; spring water flows into covered cisterns and then under the road to a streamlet.

One of the higher springs is located on the south side of The Worcestershire Beacon in the Upper Dingle Valley. It is contained in a concrete covered tank at the rear of a cottage owned by Mr Jack Lewes and supplies several cottages. The lower source also comes from the Dingle Valley and was once used to supply Lower Dingle, Montpellier Road, Park Road and Lower Montpellier Road. It also fed a sheep wash located on the west side of the road, formerly used by Walter Wilkins and others. The first sheep wash had been run by entrepreneur Mrs Hadley of West Malvern, who had a tub enclosed with hurdles and charged people to wash their sheep. The late 19th-century sheep-washer stood in a 60-gallon barrel with an inlet pipe and an outlet pipe. It was surrounded by a stone wall, and nearby was a fenced sheep fold with a pond. For several generations it was run by the Pitt family of West Malvern. Today there is no trace of this useful public facility.

Following the amalgamation of Malvern Link with Great Malvern in 1898 the Malvern Urban District Council in 1902 took the water from the Dingle Spring for use in the public mains. The work was carried out under the Malvern Link (Extension and Water) Act of 1896, section 46 of which dictated that the Council should provide a fountain and trough for those with commonable rights to the Dingle Spring.

Using the water for the public mains meant that there was no more water for the sheep, so a sheep drinking trough and new sheep washing pit were provided by the council on the west side of West Malvern Road.

In September 1904, 31 West Malvern Commoners signed a petition complaining that since the Council put the tank at the Dingle, water no longer flowed into their sheep washing pool. The pool was only being fed by storm water, which did not always materialise at the required times. A sheep drinking trough was requested to be situated above the Dingle to divert the sheep from wandering down to the road to look for water. The Council compromised, offering to provide water at the Dingle twice a year "on those days when they dip their fleecy care."[1] By the middle of 1905 a drinking trough had been provided. However the dogs which frequently played in the water made it unfit for the sheep to drink and railings were required to keep the dogs out but allow the sheep to get their heads in.[2]

Under Section 46 of the Malvern Link (Extension and Water) Act 1896, it is mandatory for the District Council to provide and supply a drinking fountain and cattle trough to be fixed in convenient positions within The Dingle. This provision has never been rescinded and arguably is now the responsibility of Severn Trent Water. There was an iron drinking fountain here but it was removed in the 1970s. It was located on the verge by the lower roadside cistern.

The roadside cistern, which had previously been used for public supply, now flows to waste under the road, emerging as a brook flowing west. It is suggested that this roadside tank could easily be converted to an open spout enabling a new source of Malvern water to be available to the public.

1. A group of enthusiasts check out the roadside tank concluding that it would make a superb roadside spout.(photo by Bruce Osborne) 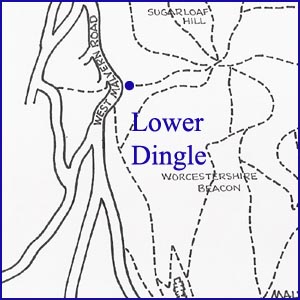