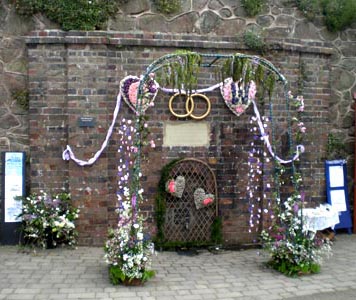 This is the third of Charles Morris's trio of gifts of water to the people of Malvern. The inscription on the plaque, until recently barely decipherable, reads "Erected for the accommodation of the inhabitants of the neighbourhood by Charles Morris Esq 1844." This date coincides with West Malvern becoming a recognised separate parish. A newspaper article dated 1904 notes, "The tank is supplied from the spring near the school quarry"[1], the school being St James's near the Westminster Bank Spout, behind which is a network of pipe work and cisterns.

The water was collected in a tank behind Westminster Spout and then piped to the cistern immediately behind Morris's spout. The cistern, measuring approx 3m x 3m x 2m high, would have contained about 4,000 gallons of water. There is access from a manhole above. The cistern roof is barrel-vaulted brickwork with a filler pipe entering from a north-easterly direction. Inside is an overflow and the feed pipe to the spout. The local people paid regular subscriptions to clean it out, although repairs were paid for by Malvern Hills Conservators (MHC) who also fenced in the top of the tank to stop dogs, sheep and donkeys from walking all over the manhole and polluting the water.

In June 1904 the hillside tank was repaired and cleaned, it being in a very neglected state. "Time had somewhat impaired his [Charles Morris] gift to West Malvern and it was no secret that the District Council's watchful Sanitary Officer had ominously shaken his head at the condition of things. The repairs have been carried out in a substantial manner by Mr A G Lewis, of West Malvern, and the cost has been borne by subscriptions... The thirsty passenger may therefore turn the tap and slake his thirst with the conviction that he is getting something good. West Malvern is not overdone with accommodation for the pilgrim".[2]

Unfortunately the generous local subscribers and the Commoners with rights to the water were to be disappointed, as were the thirsty pilgrims. The disruption reduced the flow to a trickle and eventually even that dried up. The Conservators had given their permission for the tank's cleansing and it was to them the thirsty locals turned for an explanation. It was suggested that the water course had been diverted or that the pipes had been accidentally blocked with debris. Mr Fred Ballard commented that any tank fed with pure Malvern water would not contain debris and should only need cleaning out once every thousand years! Fortunately the situation was remedied and this public supply gave, within living memory, first class, very soft water.

There used to be a post office next to the tank. In the 1890s the post office was run by Mr Hodges whose lodger, Mr Wright, planted some laurels round the tank. When Mr Hodges left, the new tenant at the post office used the laurel enclosure for storing grocery cases. The MHC ranger was worried that in time the tenant would gain a right to the land through the uninterrupted use of the enclosure. Worse than that, it was rumoured that the land had already appeared on the post office's property deeds! Mr Hodges had left the post office 3-4 years earlier but when asked he said, 'there was never any pretence whatsoever on the part of the Landlord to lay claim to the said land...'[3] The locals wanted to cut down the laurels and plant some small shrubs using local subscriptions, which they did, and which from time to time they pruned. To determine the boundaries between tank and post office, the Conservator's in May 1906 put in two boundary stones, numbered 37 and 38.

By the later twentieth century the post office (by then a grocery store) was owned by a local councillor who built a patio over the top of the tank and stored Calor gas containers on it. A deed of 1860 shows clearly that the spout was separate from the post office. An O.S title plan date 2005 also shows this to be the case. However on 21st April 2005 the shop-owner registered his title to the tank, spout and the surrounding wall. Although local people grumbled that he had misappropriated the tank, no one argued.

Water flowed to the tank through an iron pipe from Westminster Bank spring and another pipe led from the tank to the tap. For many people this was their sole water supply. Ivy Pitt recalled how, as a small child in the 1920s, she used to leave a large bucket at the spout on her way to school in the morning and on her way home at lunchtime filled it at the tap and hauled it home. The tap was much-used by local residents until the late 1950s but when the old pipes from Westminster Bank spring broke and the tank ran dry. During the summer local shop owner Ron Mason decorated the spout with hanging baskets. All was not lost however and in 2008 water from the Westminster Bank source was once again reinstated as a result of the Heritage Lottery Fund grant. This was also an opportunity to refurbish the stone plaque. 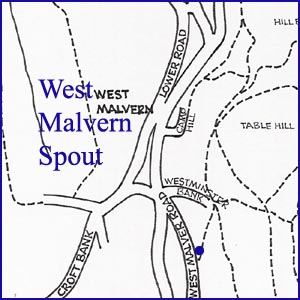