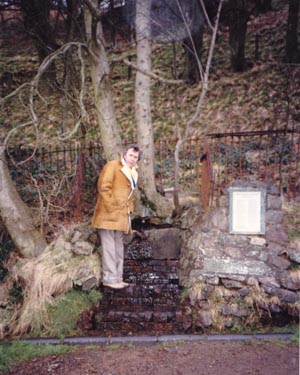 Location: at the top of Westminster Bank (off West Malvern Road), opposite the balustraded mansion that was formerly the home of Lady Howard de Walden.
Description: a spout running into a stone trough

Lying up a trackway about 400 yards from the West Malvern Road, this quaint spout flows into a basin beneath a tree that has grown over the structure. The spout flows into a rustic stone trough mounted on a blue brick plinth that was an ideal drinking receptacle for donkeys, horses and cattle. Below it is a second trough for smaller animals such as sheep and dogs. Part of the iron surround has embedded itself into a tree that grows carelessly over the water feature. Behind the spout and troughs is an enclosure that was originally surrounded by iron railings but now largely by unattractive modern fencing. The railings were planted to prevent animal contamination of the enclosure which in the nineteenth and early twentieth centuries provided the water supply for much of this part of West Malvern.

Alongside the spout is a Malvern Hills Conservators Byelaws notice and a stone sign to The Beacon. Nearby there are iron ornamental vent pipes to the sewers, decorated with weather vanes and unusually attractive; one lies about 50 yards north of the spout, with one of Malvern's 101+ gas lamp posts a few yards away. The 12 inch collector main starts in the vicinity. Nearby is the 21 bedroomed stately home built in 1891 by Lady Howard de Walden. She died in 1899 and the following year the mansion was bought by the Ballard family of Colwall. It became St James' and the Abbey girl's school two years later until 2006 when it closed.(see De Walden Water Garden for more details)

The spring is estimated to run at about 14 gallons per minute although the flow at the spout is considerably less. Behind the spout is an area enclosed by iron railings to prevent human and animal contamination of the source; a number of chambers within this area collect water to supply local properties. The depression to the far right at the rear of the enclosure when facing the public spout appears to be the main spring. A short distance downhill of the spout are two substantial double underground cisterns or tanks that supplied St James's House/College including its swimming pool. Tank No.1 is located over the natural stone wall just downhill of the spout. Tank No.2 is located to the left of the track from the spout to the West Malvern Road but is further down the hill beyond the bungalow.

Water Supplies from the Spring - From an undated map of c.1900 supplied by the late Peter Ward of Colwall, it is possible to gain a picture of the water supply arrangements that came from the spring.

On the enclosed plot of land immediately behind the spout there are seven underground chambers of varying sizes. These in turn link up with the two double tanks Nos.1 & 2 mentioned earlier via a number of underground boxes numbered 1-5, which are no longer traceable on the surface but are assumed to be still underground. Most of the underground pipe work appears to be in 4 inch earthenware pipes. 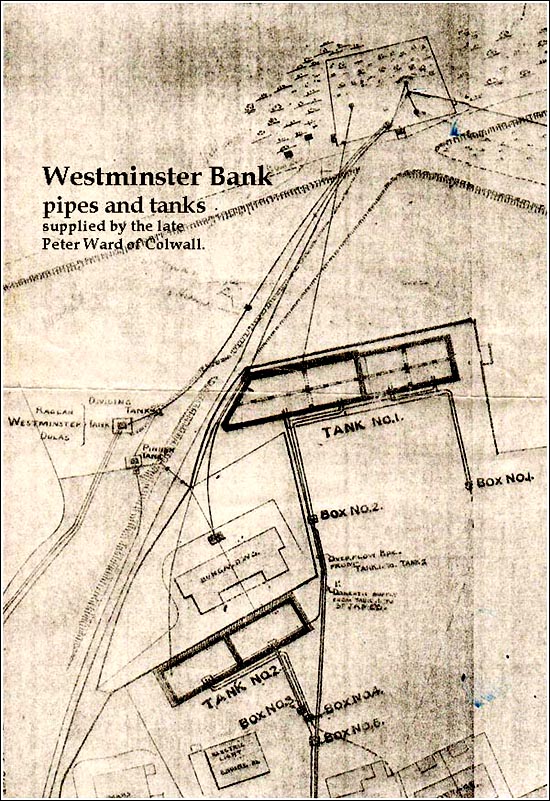 A detailed evaluation of this supply system is given in Aquae Malvernensis (1994). Amongst the various residences, establishments and other facilities that this conglomeration of water sources supplied, of special note are the following:

St James/De Walden mansion - The estate is supplied from the Westminster Bank spring via the various tanks that act as storage cisterns and header tanks. The complex supply arrangements are now little used but testify to the importance and skills of the Victorian and later water engineers. For example tank No 1 is divided into two separate halves. Each half of the tank is about 10 ft deep and the inside of the tanks is white glazed. Iron ladders give access from inspection manholes. There is a tunnel beneath the West Malvern Road through which pipe work is routed. The tunnel dates from 1930 and was the idea of Miss Baird, headmistress of St James' School. She proposed to run the tunnel under de Walden Road and West Malvern Road from the school to the playroom and gymnasium.[1] The water was vital to the school, so the chambers at the top of the hill had to be protected from contamination and vandalism. Apparently the railings weren't kept locked because in 1929 Miss Baird, the school's headmistress, said she was padlocking the spring water enclosure but that the Conservators' ranger would have a key. The water was charged at 2 pence per gallon in 1994, payable to the Malvern Hills Conservators.

There have been several problems with the supply system over the years. Circa 1910 Malvern experienced an earthquake which fractured the iron main supplying the De Walden/St James estate. On another occasion St James and the Abbey School, which closed in 2006, had its supply from the lower tanks terminated abruptly in recent years. When the owner of the black and white house lying directly uphill from this reservoir built a new computer room he accidentally perforated the pipe to the lower tanks 2, which ended the water supply.


The West Malvern Morris tank and spout (C33) was also supplied from this cluster of chambers via a pipe line that runs down the track heading in that direction. This supply has been reinstated in the early 21st century. The pipe to Morris's tank gives a clue to the age of the installations as mid 19th century.
The spout in nearby St James's Churchyard (C32) is sourced from the vicinity of the Westminster Spout. The Montpellier Spring (C31), also exists lower down the hillside and is believed to originate from Westminster Bank as does the supply for the now abandoned water garden in the grounds of St James's. (C32)

Today the enclosure can still be explored, although much is in a derelict condition. Local people still collect water daily from the spout for making tea and beer - or just drinking as it is, though a warning notice suggests that it should be boiled first. It would justify restoration, not only as a living record of early water supply arrangements but also as a means of reinstating pure spring water, available for public usage. 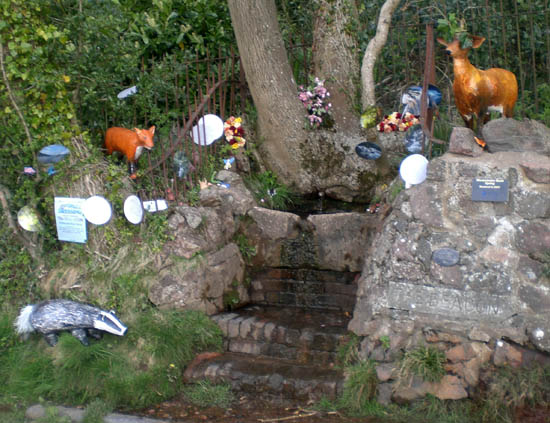 Illustrations:
1. The spout in the 1990s.
2. Peter Ward's site map.
3. Westminster Bank decorated for the 2015 May Day weekend celebrations by St. James School. 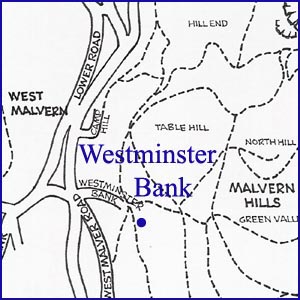