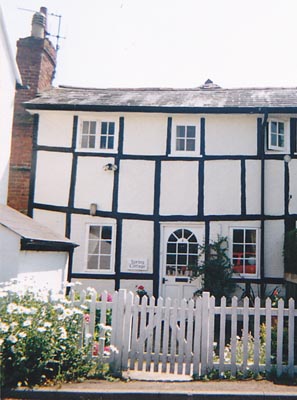 Location: just off the A4103 near the New Inn, take the lane to Norrest Farm.
Description: a covered spring chamber not generally accessible.

It is not well known that the Malvern Hills has more than one Holy Well. A second lies on the northern extension of the hills, approximately two miles north of North Hill. Holywell Cottage lies immediately down the lane to Norrest Farm on the right and has a cast iron pump in the front garden. The lane was the original main coach route and the modern main road is a later by passing of this hamlet. Teazle was the original Toll House. A tenth century charter describing the boundaries of Leigh parish says that the boundary near Storridge passed near the Hwitan Wyllan or white well, now known as the Holywell.

The Holy Well itself is apparently by the back door of Spring Cottage, a few metres further up on the left. Nearby is St Augustine's House. St Augustine is the patron of sore eyes thus giving a logical relevance to his relationship with the spring.

According to local folklore St Augustine rested in this tiny hamlet while on a mission to Hereford some time after 597 when he was acting as the Pope's missionary to Christianise the country. St Augustine is the patron saint of sore eyes, which provides a logical relevance to his relationship with the spring.

Augustine was the first Archbishop of Canterbury and was one of the first missionaries from the Pope to Christianise the English in the sixth century. Prior to his first mission to England Augustine had been of somewhat indeterminate character but this mission gave him strength of purpose.

Augustine's mission set out in June 596 on the long journey to England, armed with letters to bishops and princes in the countries that their journey would take them through. Tales of uncouth islanders appears to have discouraged the party and Augustine returned to the Pope for counsel, while his party waited in Aix-en-Provence.

Augustine returned to his party in August. In the spring of 597 they embarked on the sea crossing to England, arriving at the Isle of Thanet where they awaited contact with King Aethelberht. Both sides met, initially with some trepidation. Fear was quickly dispelled and the King sanctioned the winning of converts to the Christian faith. The party of missionaries was furnished with lodgings in the decayed metropolis of Canterbury and it was here that they established their Benedictine mission.[1]

The evident sincerity of the missionaries prompted the King to seek baptism and this gave great impetus to Augustine's enterprise and Augustine was given title as head of the English Christian establishment. Subsequently the King allowed his wider territories to be integrated into the diocese and orchestrated dialogue with the Celtic Bishops.

The Celtic Bishops however refused the strict adherence to ecclesiastical uniformity advocated by the Benedictine mission. The Celts retired back to their mountains. Augustine's response was to predict that if the Celts had no peace with the Christians the alternative would be that they would perish in the hands of the Saxons. This prophecy came true in 607.

These efforts at Christianising the Celts are the last great recorded endeavours of Saint Augustine and it must have been about this time that he travelled to the Holy Well at Storridge. Augustine died in May 604 and was buried at Canterbury. His feast day is 28 May on the Roman calendar but in the proper English tradition it occurs two days earlier, the anniversary of his death.[2] 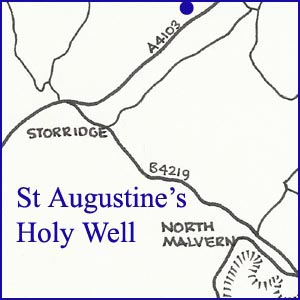 On Private Property
Free Parking Nearby