Location: by the stocks and whipping post in North Malvern Road.
Description: a derelict iron drinking fountain by the roadside.

This 4 ft high iron column, made in Coalbrookdale, was once a public drinking fountain. It is an unusual example of an urban iron standard provided as a fountain for hte populace after piped local water was laid on. Adjacent is the base of an animal trough which was established primarily for the use of cattle and dogs, and appropriately sited near the North Malvern pound. Unfortunately the elaborate fountain head and the trough are missing. Both fountain and trough were erected in 1895 by the Malvern Society for the Prevention of Cruelty to Animals and paid for largely with the 20 pounds legacy of Miss Pyndar of Mainstone Court, Ledbury, the difference being made up by Miss Lowe of Malvern.[1] Today the elaborate fountain head and the trough are missing but an old mains stop cock nearby confirms that these facilities were once fed from the public supply.

A water supply was already available here, having been provided during the 1870s. In those days obtaining water for the watering carts (for street watering) was very inconvenient due to the distance between the pumps so it was decided to sink a well "at a point above Trinity Church to supply North Malvern district, which would be a considerable convenience to the neighbourhood".[2] The provision of a water supply for local residents was covered by legislation. Under section 9 of the Public Health (Water) Act 1878 the local Rural Sanitary Authority was empowered to supply a public standpipe or spout and to recover water rents or rates from the occupiers or owners within 200 yards of the facility. This applied to areas of 'low rental' where houses were clustered together.[3] The elegant iron fountain probably replaced this earlier watering point in 1895.

The animal pound, now ivy-covered, forms the backcloth to this most interesting corner of North Malvern on the edge of Kendalls Common. In front of the pound is a railed area which contained both stocks and whipping post. In 1897 the whipping post was unfortunately 'whipped'. Someone had stolen a part of Malvern's heritage, as the local paper lamented, "This bit of real common, real old stocks, and genuine whipping post all together make up a combination now rather rare in the country, and it attracted the fancy of many visitors".[4] The arms and the seat of the stocks also went astray so to prevent further vandalism the railings were erected round the stocks and whipping post by the Council with the consent of Sir Henry Grey as lord of the manor in September 1906.[5]

In 1930 the Conservators also showed an interest in preserving the stocks and whipping post (by then replaced). These were under their jurisdiction, being situate on common land. Conservator Mr Evans entertained his colleagues when he told them that "his grandfather had stated that long before Trinity Church was built on Common land, men were carried up from a public house for twelve hours in the stocks and frequently were in a worse condition when they were released than when they were put in the stocks"[6]

1. The Fountain, a mere shadow of its former self.
2. Stocks and whipping post, late 19th century. (courtesy Malvern Museum)
3. The horse trough before the installation of the fountain. 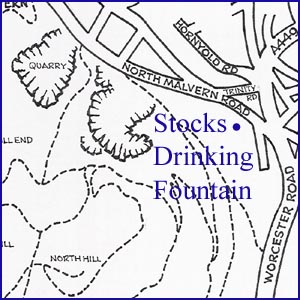